Encryption of data at rest is becoming more and more crucial in today's world. This tip is aimed to help businesses that do not have the budgets or resources to purchase hardware encryption tools or to upgrade to SQL 2008. It basically illustrates how to achieve transparent file encryption with SQL 2005 or SQL 2000.

TDE (transparent data encryption) is only available with SQL Server 2008 and later, so in this tip we go over a way you can achieve this with other versions of SQL Server.

SQL Server 2005 introduced a column-level encryption; this kind of encryption is a manual process that requires a re-architecture of the application in order to integrate encryption and decryption functionalities. The traditional limitations of encryption are inherent in this method as none of the automatic query optimization techniques can be used.

SQL Server 2000 does not offer any kind of encryption at all.

The only inexpensive alternative solution is to use Windows native Encryption File System (EFS). EFS is a file encryption feature introduced in Windows 2000. Like encryption in SQL Server, EFS relies on the Windows Cryptographic API (CAPI).

Here I show you how this can be done to encrypt the files at the Windows level. 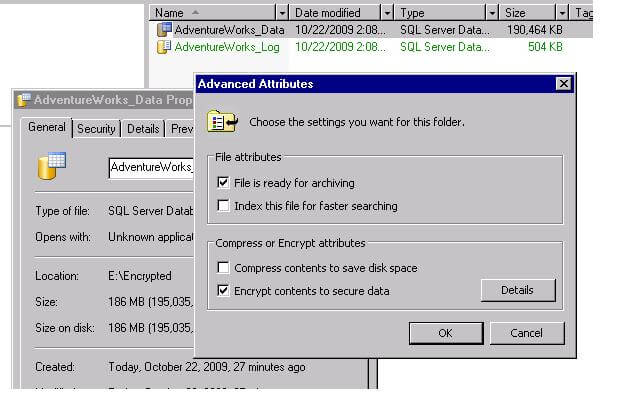 One thing that is important to clarify is that, if SQL Server is busy (OLTP Application) EFS encryption is not a good idea because EFS decreases performance in some features of Microsoft SQL Server such has read-ahead and checkpoint operations.

When EFS encryption is enabled, SQL Server I/O operations are synchronous therefore the worker thread has to wait until the current I/O operation on the EFS encrypted database file is complete.

The only way to workaround the above stall situation is to use the I/O affinity mask option.