I have been tasked with setting up Transparent Data Encryption (TDE) on a SQL Server database with sensitive information. In the examples I've seen, I know I need a database master key in the master database and then a certificate that's encrypted with that master key. A question that comes to mind is that if I choose to restore the database to a different server, does my database master key have to have the same password? Every example I've seen includes the same password. What else do I need to plan for in order to have a successful recovery?

Configuring a SQL Server database for TDE is a straight-forward process. It consists of:

If you're reading this tip and aren't familiar with the edition requirements, TDE is only available on Enterprise Edition versions of Microsoft SQL Server.

Let's set up an example database with the following code:

This starts the encryption process on the database. Note the password I specified for the database master key. As is implied, when we go to do the restore on the second server, I'm going to use a different password. Having the same password is not required, but having the same certificate is. We'll get to that as we look at the "gotchas" in the restore process.

Even on databases that are basically empty, it does take a few seconds to encrypt the database. You can check the status of the encryption with the following query:

As the comments indicate, we're looking for our database to show a state of 3, meaning the encryption is finished. Here's an example of what you should see: 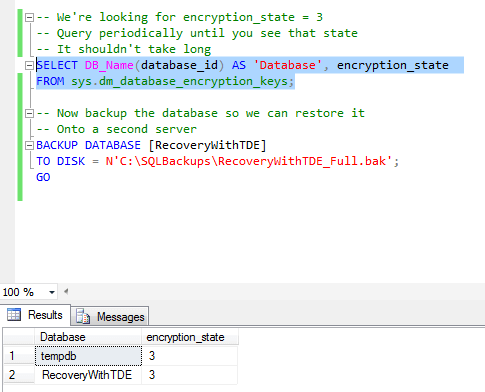 When the encryption_state shows as 3, you should take a backup of the database, because we'll need it for the restore to the second server (your path may vary):

Now that we have the backup, let's restore this backup to a different instance of SQL Server.

Failed Restore - No Key, No Certificate

The first scenario for restoring a TDE protected database is the case where we try to do the restore and we have none of the encryption pieces in place. We don't have the database master key and we certainly don't have the certificate. This is why TDE is great. If you don't have these pieces, the restore simply won't work. Let's attempt the restore (note: your paths may be different):

This will fail. Here's what you should see if you attempt the restore:

Note the difference in the password for the database master key. It's different, but that's not the reason we'll fail with respect to the restore. It's the same problem as the previous case: we don't have the correct certificate. As a result, you'll get the same error as in the previous case.

Failed Restore - The Right Certificate, but Without the Private Key

The next scenario is where you do accomplish the certificate restore, but you don't have the private key. This, too, will fail. However, before you attempt the T-SQL code, you may have to fix the file permissions on the certificate file and the private key file. This is likely if you are attempting to do the restore on a SQL Server instance that's on the same system as the first instance. To ensure your second instance can access the files, go to the location of the files and bring up the file properties (right-click on the file and then select Properties from the pop-up menu).

Click on the Security tab and then click on the Advanced button. When SQL Server wrote these files, it probably broke the inheritance of permissions, and we're going to fix that. 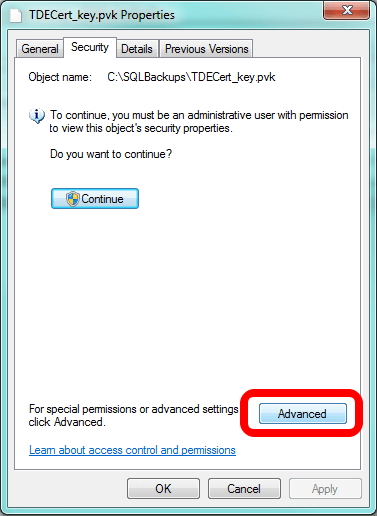 This brings up a different interface and you should be looking at the Permissions tab. If you see it, click on the Continue button. You'll see it if UAC is on. 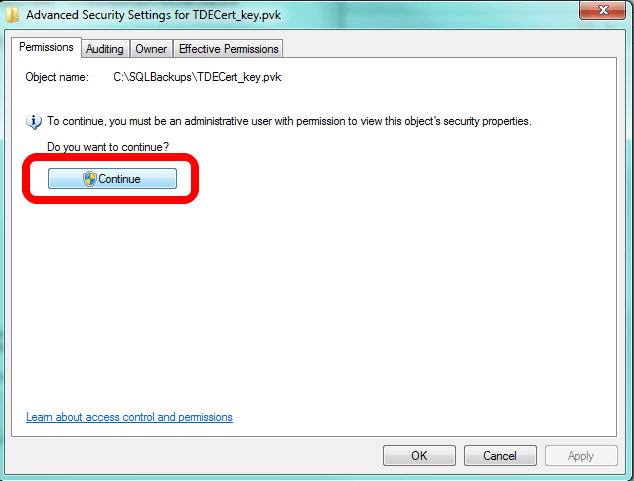 Now you'll turn on inheritance. Note what I've circled. If the box is unchecked, as it is in following image, that means inheritance is off. If that's the case with your file(s), click to check the box and click OK at every interface to turn inheritance back on. 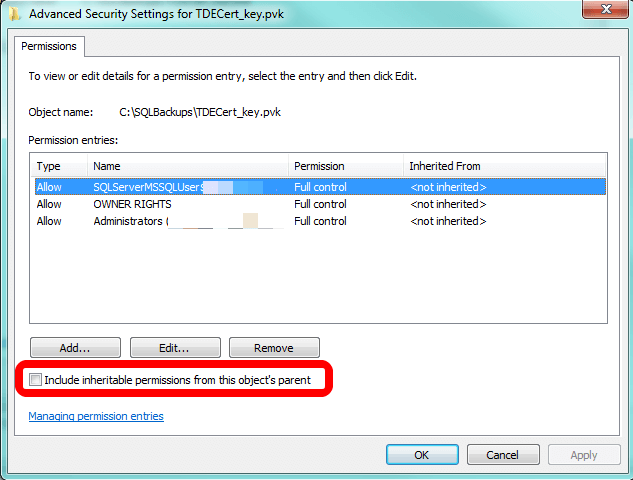 We have the right certificate, but without the private key, SQL Server can't use it to decrypt the database. As a result, we get a different error, telling us that there's a problem with the key. The error says the key appears to be corrupt, but we know the real issue: we didn't restore the key. 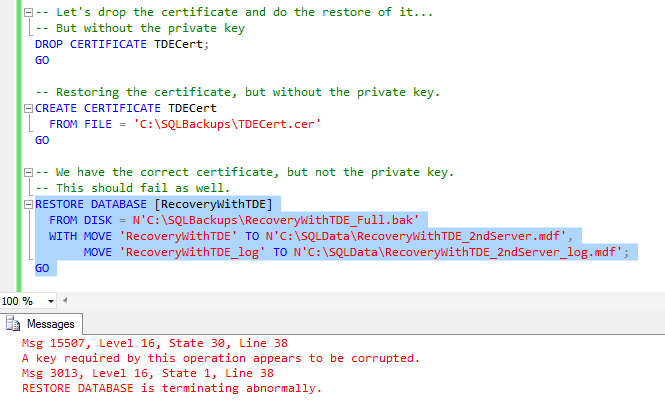 Since we have the database master key, let's do the final two steps. Of course, since we have to clean up the previous certificate, we'll have a drop certificate in the commands we issue:

With everything in place, we are finally successful! 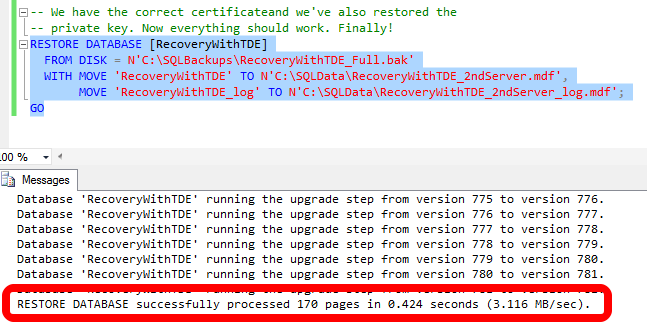 Don't be alarmed if you don't see the upgrade step messages when you do the restore. For this example I created the initial database on a SQL Server 2008 R2 instance and I did the recovery onto a SQL Server 2014 instance. Therefore, if you had a question about whether you could take a TDE protected database and recover it to a different version of SQL Server, the answer is yes, as long as the new instance is running Enterprise Edition and that new instance has the same or higher version of SQL Server (to include service packs, cumulative updates, and any hotfixes/patches). The second requirement shouldn't be a surprise, as that's the standard requirement for restoring a database to a different server.