Problem
We have SQL Server Reporting Services (SSRS) 2005 running on a single server that supports a large user base.  There are specific times during the month where the response time is not acceptable.  Based on performance data that we have gathered we have been able to pinpoint the times when the server is extremely busy.  What we haven't been able to figure out is what reports were running and who was running those reports.  In this tip, I will go over some of the logging mechanisms available in SSRS to answer these questions.

Solution
SSRS has a built-in logging capability that can provide the information that you need.  The ReportServer database has a table named ExecutionLog which contains the following columns:

The column names are pretty self-explanatory.  You can get the report name from the Name column in the Catalog table by joining the ExecutionLog.ReportID to Catalog.ItemID.  However, you need to check if the built-in logging is enabled and how long the data is being retained.  To do that please refer to our earlier tip Logging Options for Reporting Services 2005.

The amount of data collected in the ExecutionLog table will grow steadily on a busy server.  In order to conserve space you will want to retain only a small amount of history.  However, you would like to be able to go back and see over time how report usage patterns are changing.  The logical next step is to periodically extract data from the ReportServer database, transform it into a dimensional model, and load it into a data mart on another server to support analysis, ad-hoc queries, and reporting.  You can pickup a nice example of how to do this in the SQL Server 2005 samples available on the Code Plex site.  Assuming you installed the samples in the default location, you will find the sample in the following folder:

The sample includes the following:

The Createtables.sql script creates the following schema for the data mart: 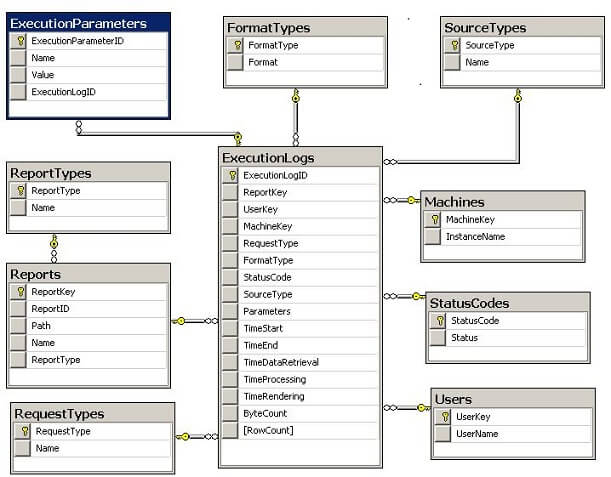 This is the typical star schema that we would expect.  There is no calendar dimension which would be convenient for analyzing reports run on weekends, holidays, etc.  The various dimensions can easily be used to populate dropdown boxes for report parameters, allowing you to filter by report, report type, format type, user, etc.

The control flow for the SSIS package is shown below: 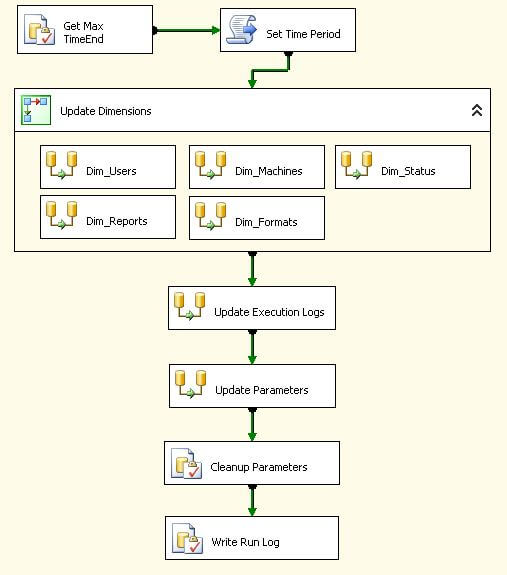 The following are the main points about the SSIS package control flow:

Now let's review some sample report from the Execution Summary SSRS Report.  The report is shown below in multiple screen shots just for convenience of copying and pasting.  The first section shows report executions per day of the month and per week: 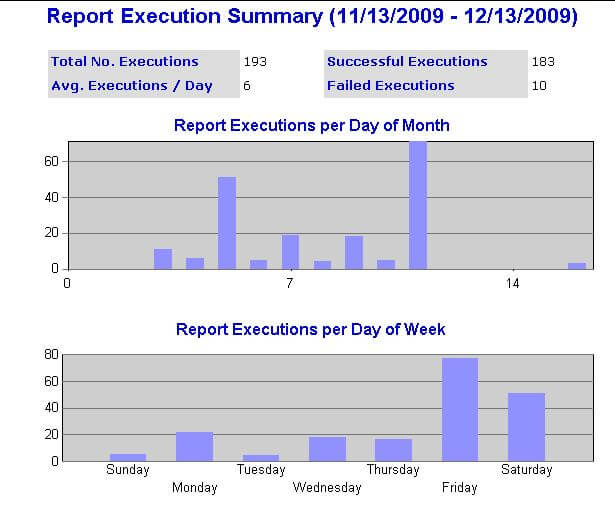 You may recognize the pattern in the Report Executions per Day of Week chart above.  I worked on a project where the sales numbers and commissions for the previous week became available on Friday morning.  There is a definite spike in report usage on Fridays and Saturdays.  Since this data doesn't change after it's computed, it's an excellent candidate for a report snapshot where you run the report during off hours, a snapshot is created, then users get the results from the snapshot instead of retrieving the data from the database each time the report is run.  The snapshot typically provides a nice performance boost where the data changes happen at predictable times.

The second section of the report shows the top ten lists for most executed, longest running, largest, and users: 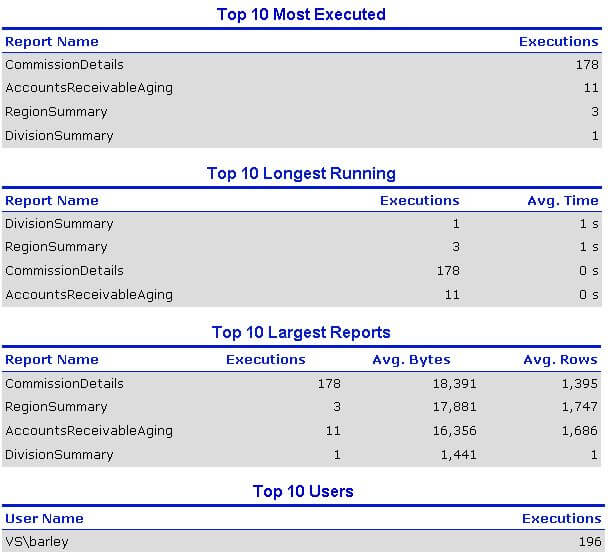 Finally the Report Name column above is a hyperlink to the Report Summary which provides details on the execution of a single report, including the parameters used by the report.

How to know what Reporting Services reports are being used