We are working on the migration to SQL Server 2008 and have geospatial data that we would like to move over as well. As part of our application we house information on locations across the globe. Which data type should we use?

In a previous tip we discussed the geometry data type. The geometry data type can be used to house planar, or flat-earth, data where the curvature of the earth has no effect on distance calculation between points. If your application houses data whose points are more than a mile or so apart then the geography data type is the data type to use. 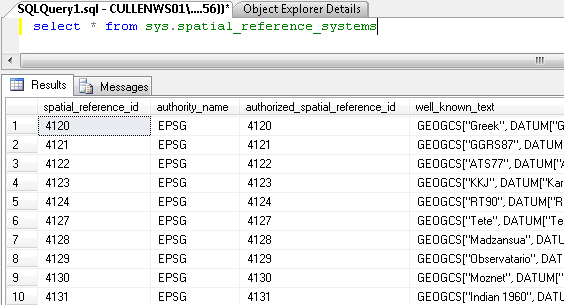 The specified Spatial Reference Identifier must be one that is supported and listed in the sys.spatial_reference_systems view. If one is specified that is not supported the following error is returned: 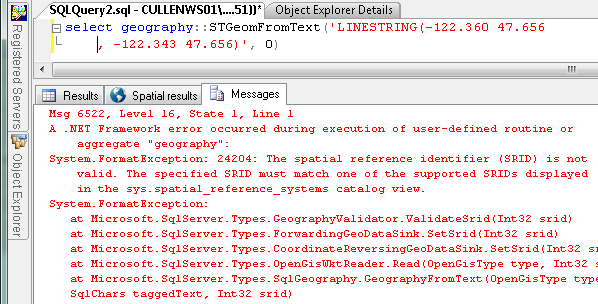 To demonstrate the use of the geography data type I have created a table in the MSSQLTIPS database called EarthquakeData. A newsletter entitled SpatialNews Daily is sent out daily and included in the newsletter is data on all earthquakes in the world for the previous days. I will be housing the information on the world's earthquakes in that table.

Included in the earthquake is the date and time (UTC), latitude, longitude, depth, and magnitude. In both the geometry and geography data types, there are additional values, or attributes, that can be housed in the data type. These are known as "m" and "z" ordinate values. What is housed in these values depends on the application in which the data is used. In this case, we can house the coordinates, depth, and magnitude of the earthquake in the field by making use of he m and z ordinate values. Below is the definition for the table:

There are some interesting points to remember about using the geography data type. The first point is that since the geography data type is implemented as a .NET CLR data type, the methods are case sensitive and an error will be returned if a method is called otherwise. The second point is that the methods must be called via geography::method since it is a static method. Finally, and perhaps most important, is the order in which the coordinates are entered in the data type. The functions used for the geography data types view coordinates as {X,Y} coordinates. In order to properly document the locations of the earthquakes I will need to present the data as longitude first, then latitude, which is different from how most people think of earth-related coordinates. As for the Spatial Reference Identifier, the one that is used for the planet Earth is the World Geodetic System 1984 (WGS 84), represented in the sys.spatial_reference_systems table as 4326.

Because the data did not present itself initially in a useful form there were some modifications to be made. The main issue was that the latitude and longitude were represented as North, South, East, and West coordinates. The .NET CLR function for conversion to the Well-Known Binary Representation expects numeric values; latitudes south of the equator are expressed as a negative number and longitudes west of the Prime Meridian are also negative (according to NationalAtlas.gov). For example, north Atlanta is around the coordinate 33.9 Latitude and -84.4 Longitude; -23.4 Latitude by -57.43 Longitude is around Concepcion, Paraguay.

In my case I had to loop through each of the entries to update the table with the Well-Known Binary Representation. Here are samples of the script I used for the update: 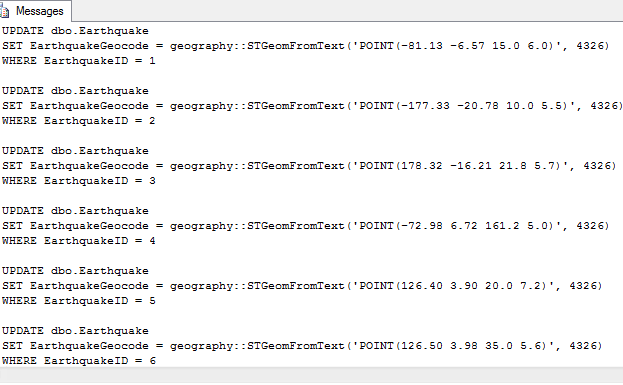 Once converted into the Well-Known Binary Representation I can see the textual representation using the CONVERT function: 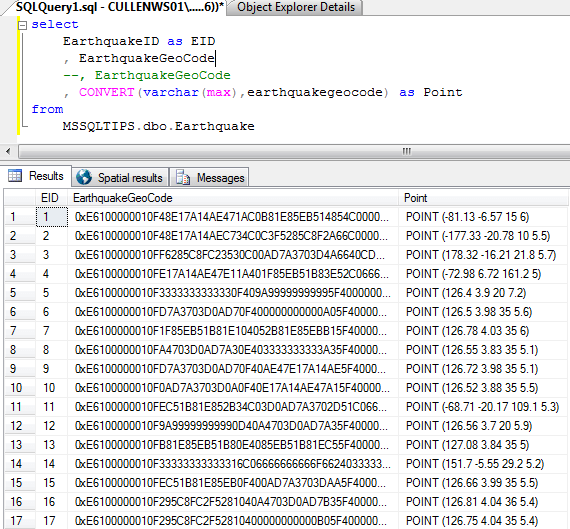 To extract the individual coordinates use the following functions: 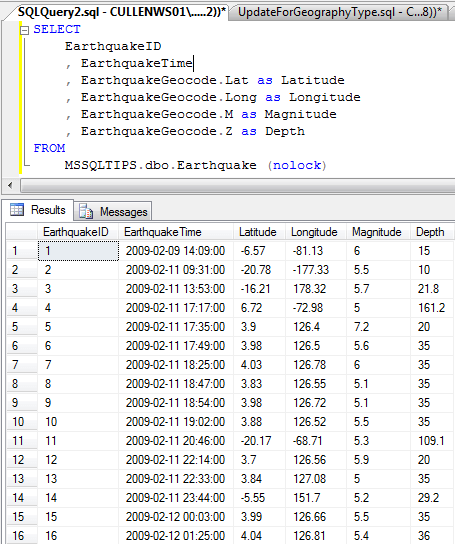