The institution I work with has decided to migrate their database system to SQL Server 2008. One of the applications uses geospatial data, which consists of millions of rows. I understand that their are indexes that can be used for geospatial data, but have not worked with them. What's the scoop on them?

Geospatial data has certainly become an important component in applications for everything from tracking packages via delivery services to the outdoor activity of geocaching. Before long these tables can grow to millions of records. Although SQL Server has indexes that assist in narrowing a result set, the storage of geospatial data as a binary format represents an interesting challenge in terms of indexing. SQL Server 2008 provides Spatial Indexes for this situation.

Like other indexes in SQL Server, spatial indexes utilize a B-Tree structure. B-tree structures, however, can represent data in only two dimensions, so the index re-factors the space into a four-level grid hierarchy, referred to as Level 1, which is the top level; Level 2; Level 3; and Level 4. Level One is more like a "bird's eye view" of the covered area; each level below that takes a section of the previous level and further divides it into another grid. The numbering of the cells shows the hierarchy. The first cell in Level One is 1; the first cell in Level Two is 1.1 because it is a subsection of Level One. This hierarchical model is built into the query processor, which allows for minimal storage of the information needed. Each level contains the same number of same-sized cells, the size of which can be specified when creating the index. The more cells in an index, the more dense the grid is. So a grid with 64 cells is more dense than a grid with 16 cells.

When a spatial index is created, it first performs the refactoring of space. It then performs a tessellation process, whereby it fits the space represented by the data into the previously created grid hierarchy without gaps or overlaps. The tessellation process is governed by three rules: 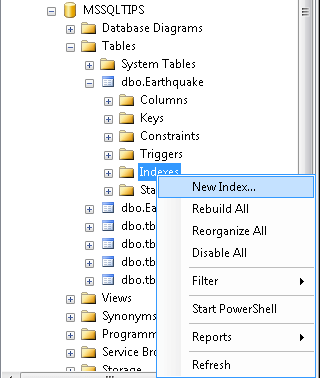 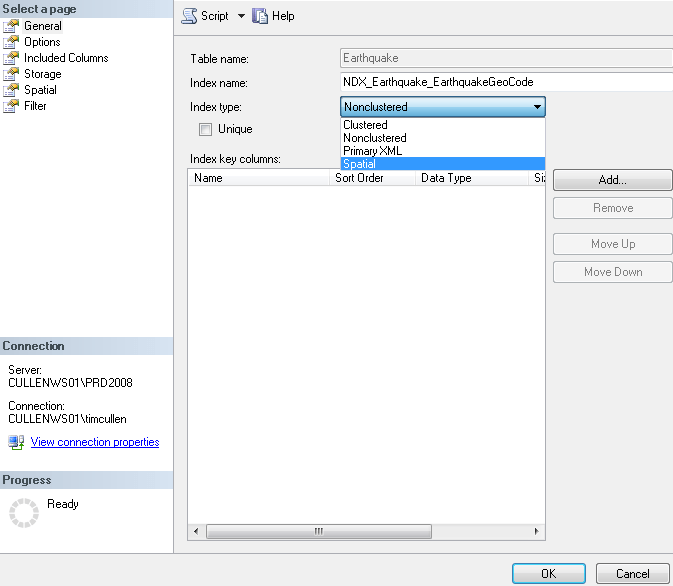 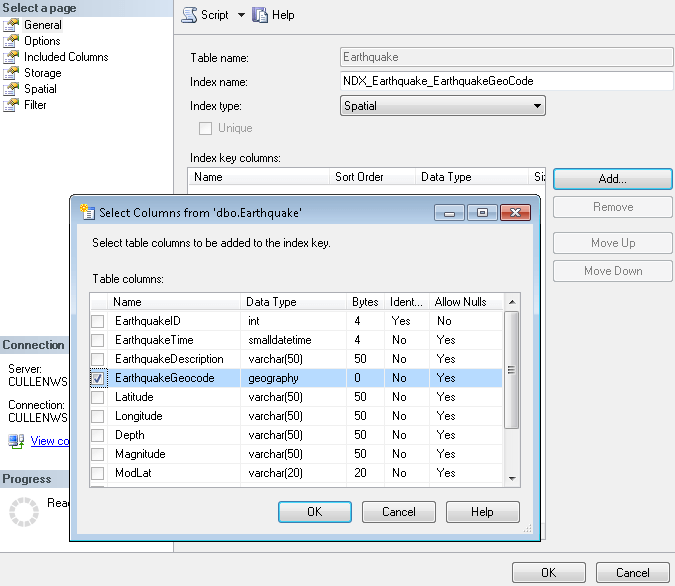 The choice for tessellation is tied to the data type on which the index will be created. On the left lower side (in the Progress area) you'll see that an error was previously generated. I attempted to create an index on a geography data column using the GEOMETRY_GRID tessellation scheme. 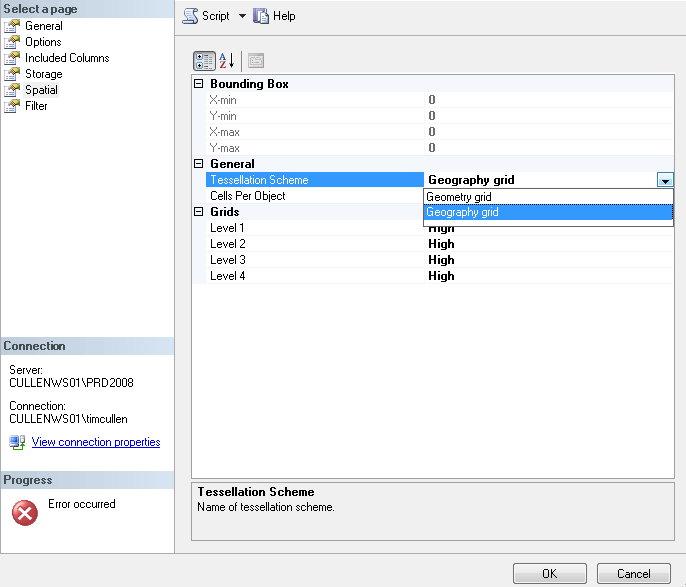 On the left side of the main Index Creation are additional options for the index. Of most importance is the Spatial section. In this section you can specify the bounding box parameters (for indexes on geometry columns only) and grid density. 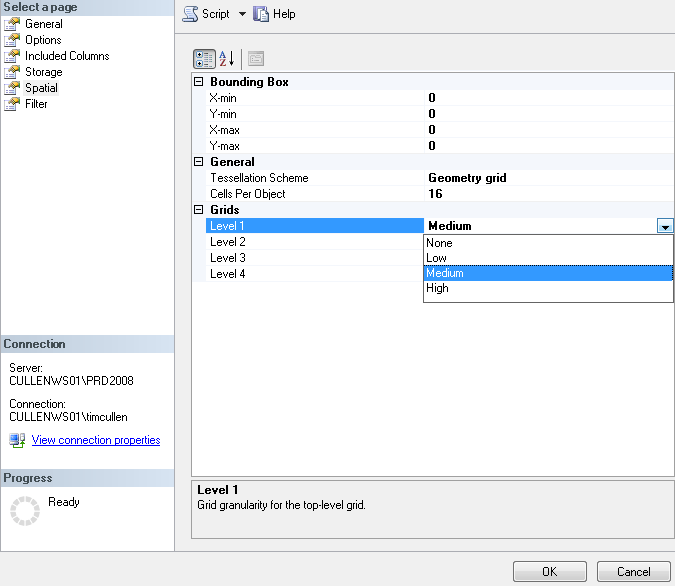 To show the difference in performance let's look at the number of earthquakes near my fictional getaway spot near Fiji. The approximate coordinates of my little getaway is 179.41 Longitude by -16.57 Latitude. I would like to see how many earthquakes' epicenters occurred within 100 miles of my getaway. There are a little over 3100 earthquakes in the dataset (since February, 2009) , with 125 of them whose epicenter was close enough to Fiji so that the description of the location has the word Fiji in it. In the query I declare a geography type variable and set it equal to my getaway coordinates. Then I look for all earthquakes where the distance between it and my getaway are less than or equal to 100 miles (528,000 feet):

Performance is certainly enhanced, even in the relatively small earthquake dataset I was working against. You can experiment with the cell density and other aspects of the spatial index to meet the needs of your organization. Although it doesn't usually make sense to have multiple indexes covering the same table column, multiple indexes on a spatial data column can be used with different tessellation parameters in certain conditions.