When looking for impending problems due to lack of disk space it's necessary to know how much space is available on each drive. There have been other tips written about how to do this, but in this tip I show you a way this can be done using SQLCLR.

The .Net framework provides this information very readily through the DriveInfo object, which can be invoked and the information extracted and returned using a SQLCLR Tabled Valued Function.  Table Valued Functions (TVFs) are SQLCLR routines that return multiple rows of multi-column output. This article shows how they are implemented.

Before going too far it should be noted that there are other solutions to the problem of finding the amount of free space on each drive.  In particular, if you're willing to use undocumented system external stored procedures you can use the sys.xp_fixeddrives. Use of that procedure is used in the article Determine Free Disk Space in SQL Server with T-SQL Code. Of course, xp_fixeddrives is going to query Windows to get the information it returns.

The .Net framework exposes the functionality of the Windows operating system and the System.IO.DriveInfo class is the one responsible for information on drives of all types.  It's static method GetDrives returns an array of DriveInfo objects and each DriveInfo object has the details on one of the drives.  GetDrives returns information on all drives that are connected to the system whether they're fixed disks, network drives, full or empty CDRoms.

Most systems will have multiple drives and there are several items of information available for each drive.  This combines to make the TVF an ideal mechanism for exposing drive information.  Each drive will be represented by a row.  Each row has several columns of information such as the drive letter, total megabytes, free megabytes, volume label, etc.

To create a TVF, create a new Visual Studio 2008 project.  Choose either a C# SQL Server Project  or a VB.Net SQL Server Project in the Database Project\SQL CLR section.  It's also possible to code SQLCLR routines in manged C++, but there isn't a built-in project type for C++ so you'll have to code and deploy without the aid of a template.  This example creates a C# CLR function. 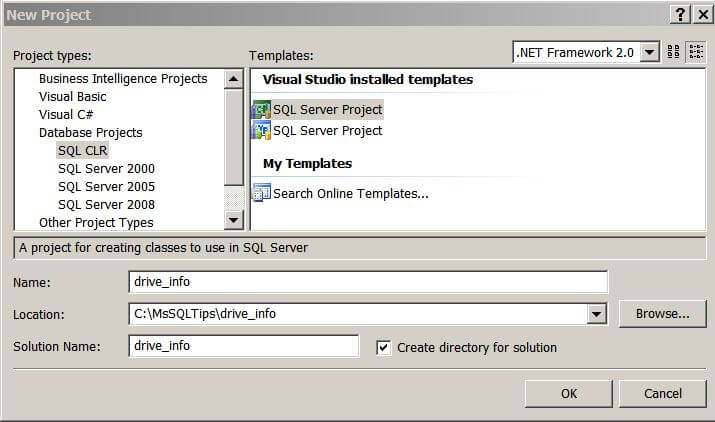 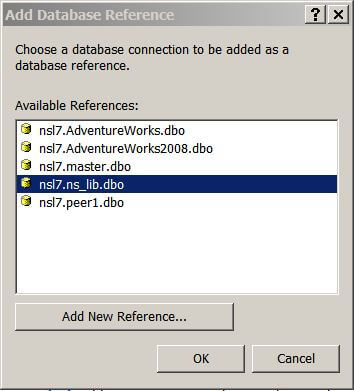 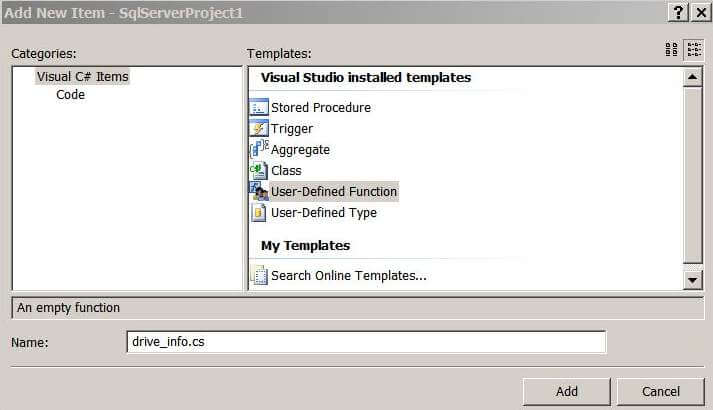 Give the function the name you want, in this case drive_info, and press the Add button.  A partial class named UserDefinedFunctions is added to your project.  The name of the class doesn't matter.  If it's a partial class, where are the other parts?  They're in any other files that are also members of the same UserDefinedFunction class in the same assembly.  I just leave them named the way Visual Studio does.   The function that the C# SQL Server Project template creates is for a static user-defined function and looks like this:

The first step is to modify the SqlFunction attribute on the drive_info function.  The attribute name remains SqlFunction, but it has two parameters.

To write the function, first bring in the necessary references.  For drive_info the System.IO and System.Collections namespaces are referenced with using statements.

The body of drive_info is almost trivial.  The function must return an IEnumerable, which includes arrays.  drive_info returns the array of DriveInfo objects returned by the GetDrives static method.  It doesn't get much easier than that.

The FillRow method takes an input parameter that's an Object and has one out parameter for each output column.  Of course, the output columns must match the definiton given in the TableDefinition parameter of the SqlFunction attribute on the drive_info function.  SQL Server will do type conversions as best it can but it can't handle all mismatches.  Of particular importance is the nullability of the types that are returned.  Notice that the total_mb and the free_mb parameters below are declared with the type SqlInt64.  Doing so allows them to be nullable.  Had they been declared as CLR Int64's SQL Server would handle the data without problem but there would be no way to pass a null value.  It's best to use the SQL types when nullability is a possibility.  drive_info has some parameters, such as letter, format, and volume_label to illustrate that CLR types can be returned and handled correctly.

The body of the FillRow method starts out by casting the Object into the type of object that's expected by the function, a DriveInfo.  The rest of the function uses the methods of DriveInfo to extract items of information to return as the columns.   CDRom drives might not be holding a disk and therefore wouldn't be able to return most information.  Rather than handle any errors from an empty drive the IsReady function is tested and null values returned.  The FillRow method should assign something to each parameter, even if it's the value null.

The GetDrives method is considered "UnSafe" code by SQL Server and before the project can be used the assembly that's going to be produced must be marked with SQL Server's Unsafe attribute.  Do this in the databases tab of the project properties as shown next by setting the Permission Level.

Finally, to use drive_info, invoke it from SSMS:

On my laptop the results are: