Do you want to distinguish yourself at classic DBA duties with SQL Server 2008? Consider passing the 70-432 exam. The Microsoft Learning site recommends the exam for those performing SQL Server DBA tasks, such as installing, configuring, and maintaining SQL Server instances as well as managing databases on those instances. Upon passing the exam, you will be awarded a Microsoft Certified Technical Specialist certification for Microsoft SQL Server 2008, Implementation and Maintenance.

There are two steps to becoming a certified SQL Server DBA expert. First, get a good grasp of the right content - namely, that covered in the 70-432 exam. Second, access the proper resources to take the test. As much as possible, get a good understanding of the types of questions you will be asked.

Overview of Topics Covered in the Exam

The exam emphasizes SQL Server administration features introduced with SQL Server 2008 as well as features that are different or enhanced from earlier versions. You'll also need to know the solutions to typical issues for upgrading from SQL Server 2005, 2000 or 7 to SQL Server 2008. You will benefit from a firm understanding of how to upgrade a base SQL Server 2008 installation (the database engine and client components) with other specialized components (Analysis Services and/or Integration Services).

Hands-on experience using the DBA feature set in SQL Server 2008 is critical to passing the exam. If you are primarily a SQL Server database developer, this is especially true. For example, you need to know how to use SQL Server Agent, SQL Profiler, and Database Engine Tuning Advisor. In addition, you'll want to make sure that you understand how System Monitor, formerly called Performance Monitor, complements built-in SQL Server tools for diagnosing performance issues.

Before taking the exam, arm yourself with an in-depth grasp of how to implement database backups and restores in a variety of different contexts. Know what's special about each of the recovery models and when to use each one. Understand the complementary roles of full, filegroup, and file backups as well as the contrasting roles of differential and log backups. Learn about backups and restores not only from the perspective of recovering from hardware failures but also from the perspectives of configuring servers supporting high availability options and migrating a database from an older SQL Server version to SQL Server 2008. Don't forget to master database snapshots as another technique for recovering from data failures.

Resources to Help Pass the Exam

The exam is mostly a series of multiple choice questions. Another question type allows you to pick and order the steps in a process, such as how to do a database restore or apply a patch to servers participating in a mirroring session. The exam questions probe you about conceptual issues, T-SQL syntax /semantics, and other topics viewed as critical by the test designers.

You need a voucher to take the exam. PROMETRIC is the provider of vouchers for Microsoft technical specialist exams. I recommend you buy a voucher with a retake option. While there are plenty of learning aids to help you ready yourself for the exam, one of the best preparations is to actually take the exam.

Microsoft Press sells a SQL Server 2008 Implementation and Maintenance Training Kit. The kit includes a book of 500+ pages and a CD with sample test questions and other resources. The test questions are administered by a version of the MeasureUp testing software. However, the actual questions were not provided by MeasureUp - just the testing software. On my first exam attempt, I focused extensively on the book and questions provided in the training kit - after all, they were from Microsoft. I also supplemented this preparation with hands-on use of SQL Server 2008 and reviews of supplementary material from the MSDN web site and the TechNet web site.

I needed to retake the exam after my first attempt. If you fail to pass initially, Microsoft gets back to you with encouragement and recommendations for retaking the exam. As I was preparing to retake the exam, I obtained sample questions directly from MeasureUp. This gave me two sets of test questions to review for the exam (the one from Microsoft Press and the other from MeasureUp).

Getting all or nearly all questions correct for either or both sets of prep questions does not assure a passing exam score. In my opinion, the actual exam questions were more than infrequently very different from either the MeasureUp or Microsoft Press questions. However, the actual test questions did come from the eight areas denoted at the beginning of the Overview of Topics Covered in the Exam section. As a consequence, my SQL Server 2008 hands-on experience along with careful study of selected content from the MSDN and TechNet web sites proved invaluable in helping me to pass the exam.

Everyone is likely to have a different background as they prepare for the exam. I authored several books on database development with SQL Server versions 7, 2000, and 2005. However, because of an opportunity in Canada with unusual requirements, I stopped working with SQL Server from April 2007 through September 2010. Also, I never passed any prior SQL Server certification exams although I did pass prior Microsoft certification exams for VB.NET and Microsoft Access. If you regularly administer SQL Server 2008 and you previously passed a certification exam for an earlier version of SQL Server, you will likely have an easier time preparing for the exam than I did. On the other hand, if you are new at SQL Server, more of a developer than an administrator, or you have not previously passed any Microsoft certification exams, you might reasonably anticipate the need for extensive preparation supplemented by lots of focussed hands-on practice for the exam topics.

After finally passing the exam, you get authorized to access the Microsoft's MCP site. From that location, you can download your certificate. Here's what it looks like. 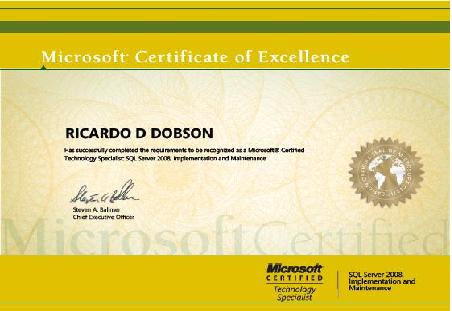 Getting Started as a Microsoft Certified Trainer (MCT)

How to become a SQL Server MVP

Overview and Benefits of the Microsoft Certified Educator (MCE) Program