The creation of an index on computed columns usually offers the following benefits:

The following example highlights a problem when ISNULL is used in a computed column and how to fix it for performance.

Let's create the following table and fill it with 30,000 rows.

Turn on Include Acutal Execution Plan and run the following query.

This is the query plan that we get. We can see the Estimated Number of Rows is 547 which is not correct since the query returns 30,000 rows. This is because there is no statistics (because it is a dynamically computed column) and the estimated number of rows is much lower than the actual rows.

Let's create a new column which is a computed column and add a new index on table test and run the same SELECT query again.

When we run the above code, we can see that the new index was not used and the Estimated Number of Rows is still 547.

If we take a close look at the computed expression we can see we are using ISNULL, but since "col1" is non-nullable we do not need to use ISNULL. So, let's drop the previous column and index and re-create them as:

This time, we can see that the newly created index IDX_myString1 was used and the Estimated Number of Rows now reflects the query. 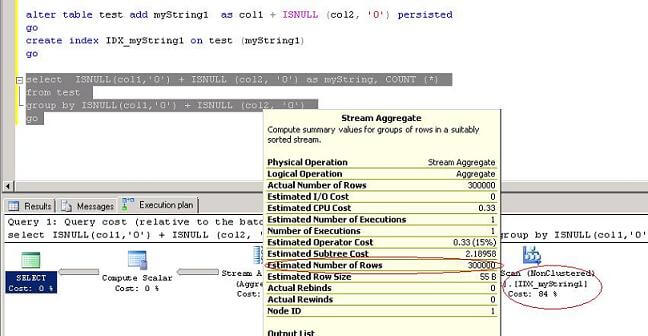 As you can see using ISNULL on the persisted column caused SQL Server to using the statstics in a different way versus when ISNULL was not used on the first part of the computed column.