Due to a recent rebuild of the master database for a SQL Server instance, I now need to restore the msdb and model databases.  In this tip we walk through the process that you need to follow to restore the model and msdb databases successfully.

Before we get started, let's quickly discuss what the msdb and model databases are used for.

Use the following command to create a full backup of the msdb database using T-SQL commands. You will need to modify the script to use a valid backup path.  You can perform the same process for the model database as well.

After this is complete we have a full backup that can be restored.

To ensure we have a smooth restore we need to follow these steps.

The term source server here refers to the server on which the backup was created and destination server is where the restore will occur.

Get version of destination server

In the case of a mismatch, the version of SQL Server for the destination needs to be manipulated by installing or removing service packs.

Here are the three ways to get the version for the SQL Server database engine.

Connect to a SQL Server instance through SSMS and find the SQL Server version in object explorer as shown below. 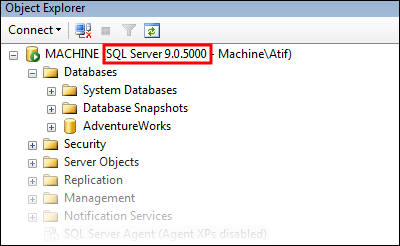 The SERVERPROPERTY system function can be used for retrieving SQL Server version information to get edition and service pack information. 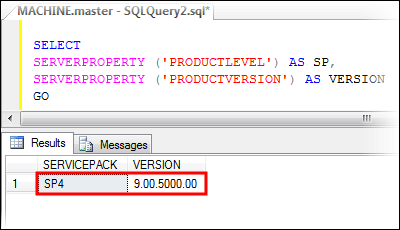 The SQL Server version can also be retrieved by using @@Version. It can be used in a simple select statement as shown below.

Get version of source server on which backup was created

Now we need to get the version of the source server on which the backup was created.  The best way to do this is to get the information from the backup file itself as shown below using the RESTORE HEADERONLY command.

Match the versions of source and destination server

Following is a mapping of version codes for SQL Server 2005 and onwards from Microsoft SQL Server support. 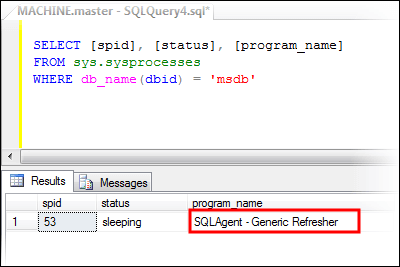 So for msdb we need to stop the SQL Agent service to make sure we can get exclusive access. This can be done by right clicking on SQL Server Agent and selecting Stop.

At this point our requirements are fulfilled and we are ready to perform the restore. Execute the following command for the restore process.

The msdb database is now restored as shown below. Now we need to put the database back in multi user (if this was changed) and start the SQL Server agent service.

The same requirements and process also work for the model database except that the SQL Agent service is not an issue.

Another thing to note is that you can restore msdb and model databases across editions such as Express, Developer, Standard and Enterprise.  You only need to be concerned that the versions are the same.