Dealing with corruption of system databases is one of the most feared situations for SQL Server DBAs. Luckily, there are a few different options to fix the corrupt SQL Server instance to get back up and running. You can get a list of those methods in John Grover's tip on How to recover a suspect msdb database in SQL Server. The last method John proposes in his tip is to "Use a SQL Server Template MSDB Database", but this option has two paths depending on what SQL Server version you are working with. If you have an instance of SQL Server 2008 or later, you can copy the database template in the Binn\Templates subfolder of the instance root directory. But if you are working with a previous version then you have to use the method that I will expose in this tip.

Most of the articles about msdb database corruption refer to a physically corrupted database, but what if instead you have logical corruption? I mean, for example if someone accidentally or deliberately modified some of the stored procedures of the msdb database. In that case, using the template msdb database won't be the best approach because you will lose all the job definitions, Integration Services Packages stored in msdb, etc.

The possible solution to the previous scenario relies on the Install subfolder of SQL Server instance root directory, which is usually C:\Program Files\Microsoft SQL Server\MSSQL13.MSSQLSERVER\MSSQL\Install. There is a file in that folder named instmsdb.sql which is the msdb creation script. Let's see how we can use it.

This procedure is quite straightforward. It consists of starting the SQL Server instance with trace flag 3608. This trace flag prevents the instance from automatically recovering any database except master. But databases will be started and recovered when accessed, so if we want to rebuild the msdb database it is a wise to avoid connections to that database.

The first step is to stop the SQL Server Instance and all the dependent services like Integration Services, Analysis Services, Reporting Services and any other application that use SQL Server. You can use any administrative tool for that purpose like the Services Manager. The screen shot below shows a command window with the commands (i.e. NET STOP 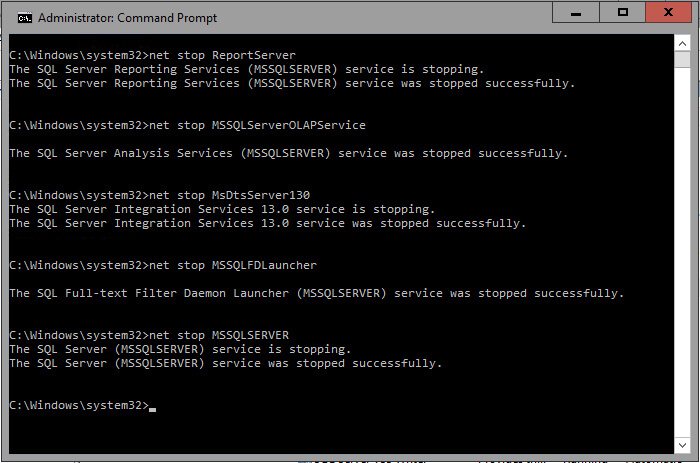 Now we are going to start the SQL Server service with the following parameters.

The /T3608 parameter enables the trace flag 3608 to prevent the msdb database from starting up. Notice that the "T" letter is uppercase; most of the startup flags are specified with an uppercase "T", there are some others that use a lowercase "t", but are usually used by Microsoft technical support only. The "/f" parameter is to start SQL Server service with its minimal configuration and in single user mode; we want to be the only ones to access the instance. The last parameter /m"SQLCMD" tells the instance to only accept connections for an application that identifies as SQLCMD. That's to avoid other applications to connect to the instance.

After the instance starts up, we open a Command window and change the folder to the install folder of the instance root directory and from there we connect to it with the SQLCMD application and detach the msdb database.

The –E parameter is used to establish a trusted connection, you can use a SQL Server login like sa if you want to. The –Q parameter executes the quoted commands and exits.

Now you can stop the instance and start it up again normally, I mean without any special consideration.

The next step is to rename the msdb database files; otherwise the next step will fail. By default these files are in the DATA sub-folder for the SQL Server instance.

Now to recreate the msdb database you can use the next SQLCMD command.

Also you can execute this script by dragging the instmsdb.sql file into SQL Server Management Studio. The next image is a screen capture showing the execution. 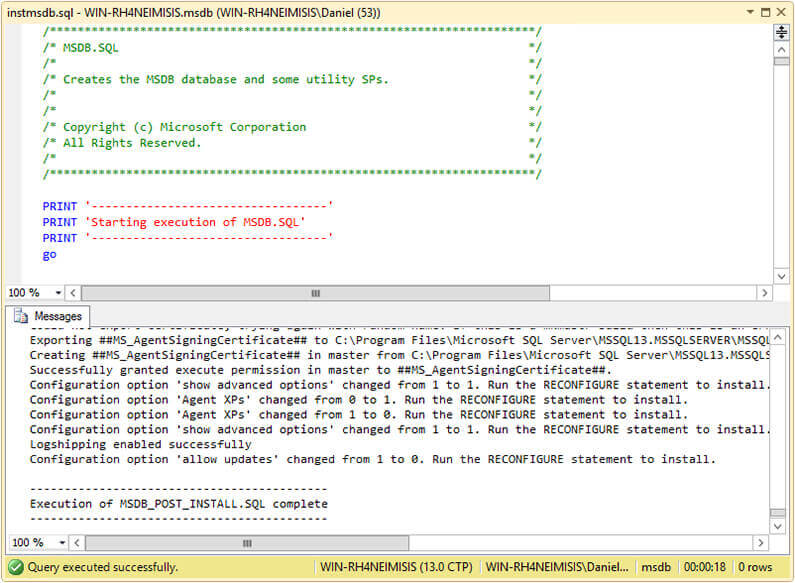 If your msdb database has altered stored procedure and you want to get them back to the original version, you can get the original code from the instmsdb.sql file. I tested that if you run the instmsdb.sql script it won't drop and recreate the system tables in msdb if they exist, but it will drop and recreate the stored procedures. The next script was copied from instmsdb.sql file and intends to create the sysjobs table. Notice that the CREATE TABLE statement is inside an IF block that is executed if the sysjobs table doesn't exist, so it doesn't try to recreate the table.

Here we can see that there is one job called SampleJob. 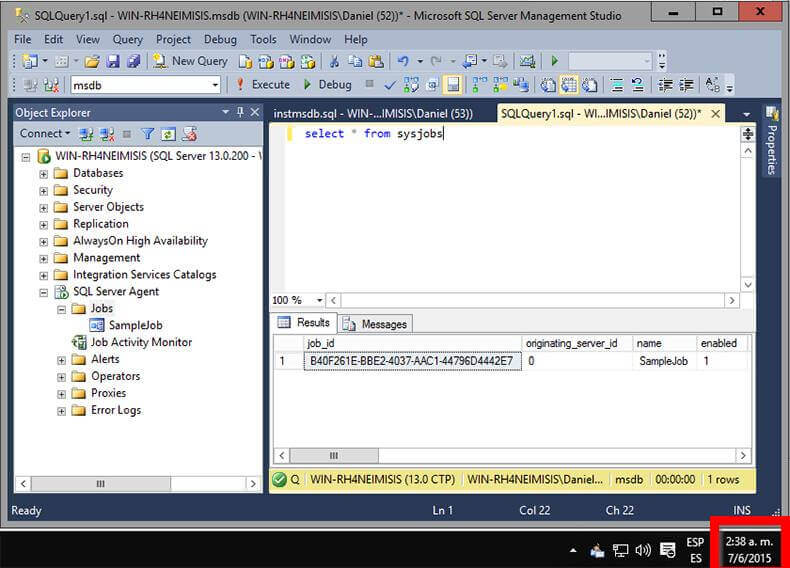 In the next screen shot we see the execution of instmsdb.sql. 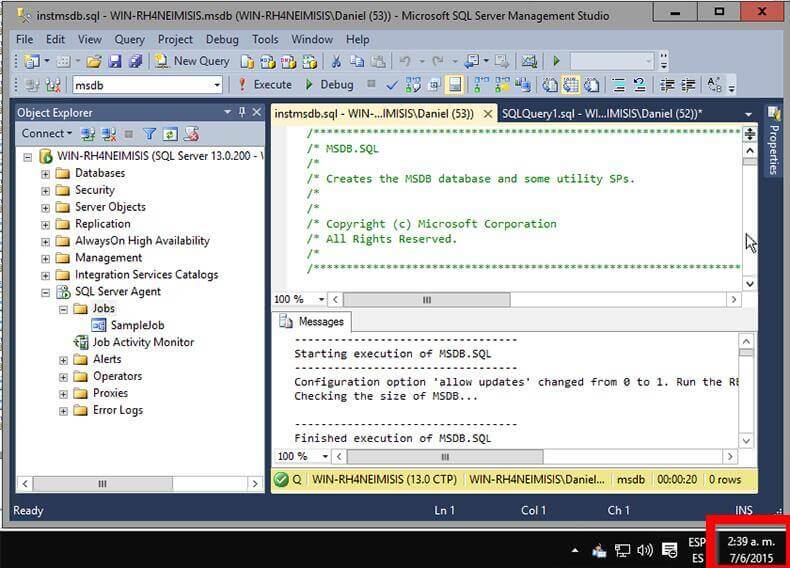 In this final screenshot after instmsdb.sql has been run, we can see that job SampleJob still exists.  So all of the data stays intact after running instmsdb.sql against an existing msdb database. 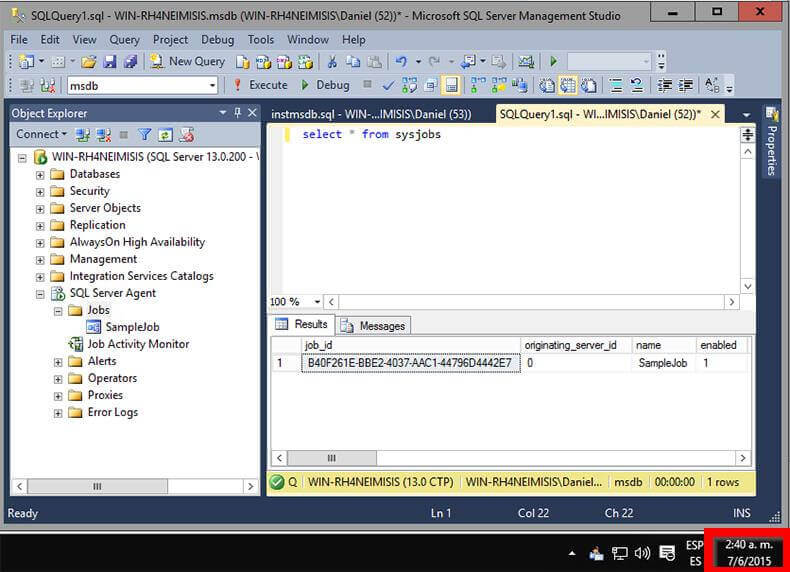