Today, some of the users reported that one of their applications is running very slow. I logged in on the database server to check what is going wrong on the database server. The issue was CPU pressure. One of the SQL Server Instance was taking most of the CPU, but we had three SQL server instances on this box, so it was quite difficult to find the correct SQL Server instance which is utilizing all of the CPU.

Step 1:- First launch Windows Task Manager to find out the CPU utilization for your database server. Below is screenshot of the Task Manager at the time of the issue I experienced. You can see all three instances have the same executable i.e. 'sqlservr.exe' and also you can see 76% of the CPU is being utilized by the first sqlservr.exe process.

Step 2:- Now we will add the PID (Process Identifier) column in Windows Task Manager to in order to find out the PID for each process.  The PID is the Windows Operating System Process Identifier assigned to each process running on the machine. In order to enable this column, ensure the "Processes" tab is active then click on the "View" menu, then choose the "Select Columns..." option.  Once on the "Select Process Page Columns" screen click the check box for the option PID and then press the "OK" button to return to the Processes tab of Windows Task Manager.

Step 3:- Now you can see the PID for the 'sqlservr.exe' process which is utilizing most of the CPU. In our example, the PID of this SQL Server instance is 2352. 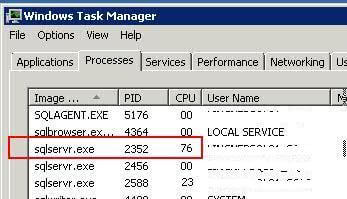 Step 5:-Another option is identify the correct PID for your SQL Server Instance is by using the SQL Server configuration manager. This can be accomplished by launching the  SQL Server Configuration Manager and clicking on the "SQL Server Services" option in the left pane. On right side of this interface, you can see the Process ID values associated with the SQL Server services.