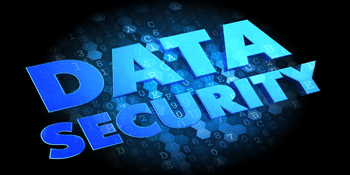 In this webinar, learn about security and compliance and things that you can implement with SQL Server to help keep your data secure.

I have a requirement to encrypt the data within a database, but I cannot let the DBAs see the data. I could build encryption routines into the application, but I'd prefer to use SQL Server's built-in encryption. Is there a way I can do this?  Check out this tip to learn more.

To prevent this, we never allow the symmetric key to be encrypted by this chain of keys. Instead, we specify a password, one known to the application. When a password is specified, SQL Server will take appropriate steps to shield the password from the standard DBA toolset. As a result, we can rely on encryption of the symmetric key via a password to keep the DBAs' eyes off the data.

Let's demonstrate this with a test database:

Now let's create the symmetric key. Obviously, there is some overhead getting the key created without a DBA being able to record and/or memorize the password. Using a password generated by a random password generator is a start. But also make sure that the password doesn't exist in a script the DBA can store away and certainly do not put the script in source control.

If you're worried about a DBA seeing the password using a trace, that's not a problem. SQL Server detects that a symmetric key is being created using a password and hides the sensitive information:

We'll need a table and we'll need some data:

The OPEN SYMMETRIC KEY is hidden in profiler. While a DBA will know that the statement was executed, he or she won't be able to see the password.

Also note that since the INSERT statement is using encryption, SQL Server again hides the sensitive info by calling the whole thing a prepared query:

A DBA can try and get at the data, but it won't succeed. Without being able to open the symmetric key, the queries don't return anything usable. In order to simulate a DBA trying this, let's first close the key:

You can try the following queries to see how everything fails without the key.

So the next step would be to try and get at the key. Let's try and open the key without specifying anything.

This doesn't work. In fact, it generates a syntax error: 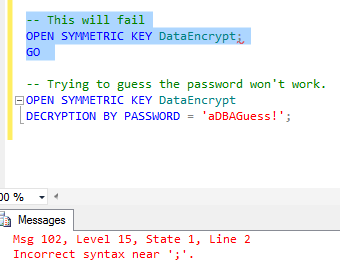 As you can see below, guess wrong and you get a different error. So while the DBA will know he or she didn't get the correct password, he or she still won't be any closer to cracking the data if you've been wise about choosing your password. 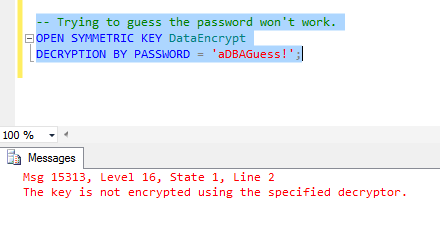 The Only Way to Get the Data in SQL Server

You have to have the password for they key. If you have that, everything is easy. With respect to an application, you'd execute the OPEN SYMMETRIC KEY statement before performing any operations requiring the key, like so:


And as you can see, this retrieves the data:

Also, the SELECT statement itself is protected:

Therefore, if you have to protect the data from the eyes of the DBA, this is a relatively simple solution that keeps the keys in SQL Server, yet keeps the data out of the hands of the DBAs. I will note one important exception. Obviously, anyone with debug rights at the OS level can look at memory. Therefore, there's always the risk of exposure from someone that has those rights. By default, the local Administrators group has those rights. Therefore, your system administrators (if sufficiently skilled) could look at that information. If your DBAs are administrators on the server where SQL Server is installed, they potentially could as well. However, it should be noted that if you do encryption within the application, you still face the fact that a system administrator could scan the memory. So you can't completely eliminate the threat. However, by taking advantage of SQL Server encryption in this manner you can certainly minimize overall data exposure.