How to Automate SQL Server Restores for a Test Server

I know that if you don't test a database backup, you don't know if it's good or not. I'd like to automate not only the backup of the database, but also restoring of the backups to a test server. There's no money in the budget for tools to assist me. How can I do this?  Check out this tip to learn more.

Likely if you're working with a limited budget you're already scheduling your backups using SQL Server Agent. Not only can we automate the backup of the database, but we can also automate the restore to a second server.

The typical way is to add job steps after the backup to do the restore on the test server. For instance:

Since this is an example, here's the very simply T-SQL to generate the backup in step 1:

With steps 2 and 3, we're going to make a connection using a CmdExec script and we'll execute the query using SQLCMD. Here's step 2:

Note that I'm calling a SQL script file because when you do a restore to a test server, you may need to move files around from their default location. That's the case here. Here are the contents of that script file.

Step 3 is similar, except we're going to simply drop the database, so we'll use a command-line query and exit:

This simple approach works most of the time. If you were to test it and both servers are up, security is correct, etc., you'll get a result like the following: 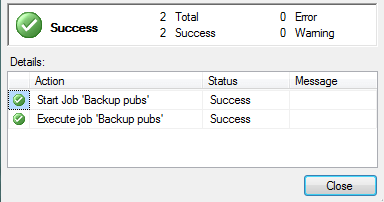 But what if there is an issue? Then you'll see this: 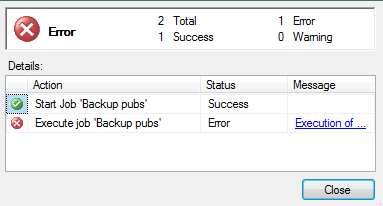 The problem is that with everything lumped together in one SQL Agent job, you don't know if the failure was in taking the backup or attempting the restore. As we see here, the problem is in the restore:

If you have an OLA/SLA, it's likely only on the database backups. If there's an issue with the test server, you want to know that separately. If that's your case, you'll probably want to do something a bit more complex, but more effective.

Separating the SQL Server Backup from the Restore

The solution is to have two different jobs: one for the backup and another for the test restore. You can call the second job from the first. Once you get it right (it isn't hard), the call to start the second job should always succeed unless there's an issue with the job scheduling system, in which case the first job won't run, either. The steps for the first job will look like this:

The first job step is the same, it simply does the backup. Here's the second job step:

Note that all you have to do is specify the job name for the second name. Also, make sure you set the database to be MSDB, because that's where the stored procedures controlling the job scheduling system are.

However, the restore did fail: