Locked out of Sysdmin? Regain Sysadmin on a SQL Server 2012 Cluster

I recently worked on an issue with a SQL Server 2012 cluster where one of the developers informed me that while making configuration changes they removed all their user logins from the SQL sysadmin role. Users were still able to connect to SQL Server Management Studio, but they were unable to perform any administrative functions. In this tip we will look at how to restore access to the sysadmin role when you are locked out of that role.

The Microsoft article Connect to SQL Server When System Administrators Are Locked Out provides the steps to regain access when you lose access due to logins being removed by mistake or from other reasons such as administrators leaving the company or an unknown sa password. However the article does not discuss the challenges that you may face when working with a clustered SQL instance. In this tip we will discuss those challenges and present a modified approach to the Microsoft method for quickly and safely regaining administrative access to your instance.

First I'd like to point out one example of a mistake that can occur due to the behavior of the removal process. Don't remove a login and try to add one simultaneously, such as when following the SQL 2012 Best Practices Analyzer recommendations and deciding to remove unnecessary logins from the sysadmin role as seen here.

One scenario that may occur is a simultaneous add and remove by an administrator. The remove will operation work but the add will fail, leaving you locked out if you don't have an alternate login or group in the sysadmin role already. In the scenario below I am removing sqluser, I had just added sqladmin but did not commit the changes by hitting OK yet.

Once I hit OK, the error appears informing me the operation failed due to insufficient permission.

Now if we open the sysadmin role we do not have permission to see the membership and only see a limited view. 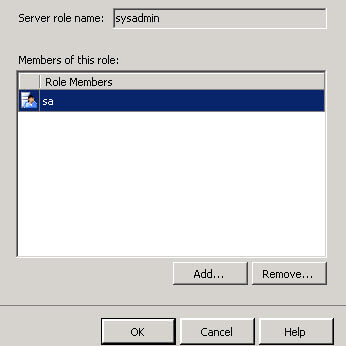 I am glad to have a domain group (domain admins) as a backup to maintain sysadmin privileges and can verify what occurred during the add/remove operation previously. As the membership proves, the remove operation succeeded and the add failed, which would have left us locked out if we didn't have a backup login or group. 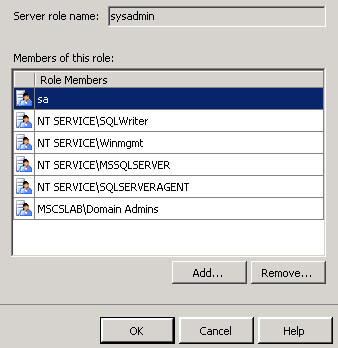 To recreate the misconfiguration I removed all user logins from the sysadmin role and have no administrative access to the SQL instance. A frequently recommended fix to re-add logins to the sysadmin role is to start SQL in single user mode as described in the Microsoft article. However one of the challenges with a cluster configuration is the difficulty to connect in single user mode due to contention from cluster resources.

To begin regaining administrative access, first open the Failover Cluster Manager. Expand to the clustered SQL Server group within services and applications and take it offline with a right-click and selecting "Bring this service or application offline".

Then bring the clustered disks and the IP address back online by right-clicking those resources and choosing "Bring this resource online". 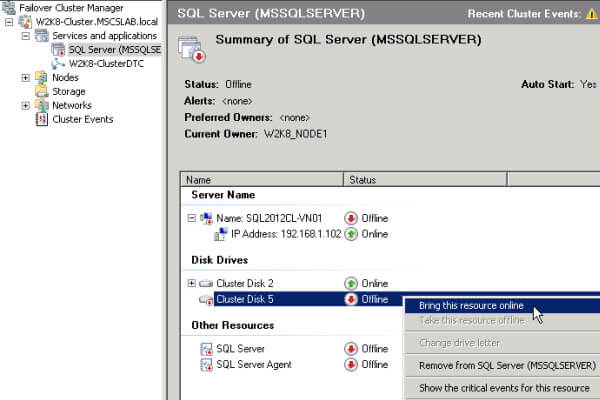 Open an administrative command prompt and run a net start command followed by the instance name and /m to begin the instance in single user mode.

Even when stopping the SQL Agent service to prevent it from using the single available connection; I found that I still could not connect and would encounter single user access errors, such as the below error, when attempting to use SSMS to connect to the instance.

However connecting via SQLCMD works.

Note: If you are using a named instance specify the instance name after the IP address.

You can then add a login to the sysadmin role with the sp_addsrvrolemember stored procedure.

After adding a login to sysadmin exit the sqlcmd session by typing exit.
Next run a net stop instance name to stop the instance running in single user mode.

Now we are ready to start the clustered instance normally and verify that sysadmin role membership has been regained. Go back to the Failover Cluster Manager and bring the whole SQL Server group back online with a right-click and selecting "Bring this service or application online".

All SQL Server cluster group resources should be back online. 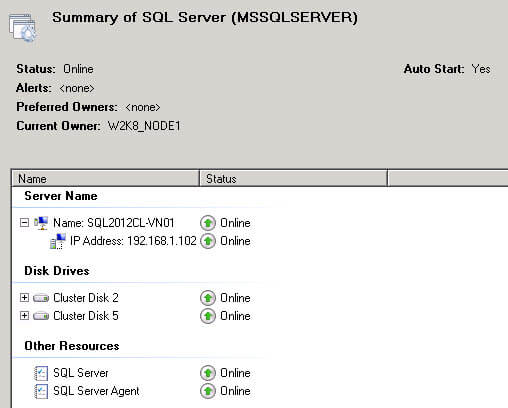 We can now log in to the instance again using SSMS and verify access to, and membership of, the sysadmin role. As you see in our scenario the sqladmin login that was originally desired now has sysadmin role membership. 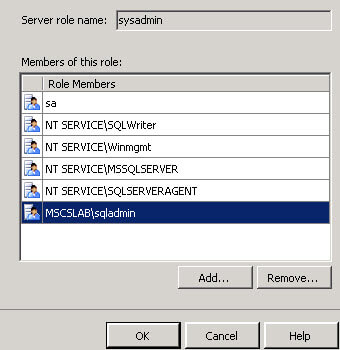 If you follow the steps in this tip you should be able to regain administrative access to your SQL Server cluster in a safe and timely manner. I hope that this tip will help other administrators and engineers save time if they find themselves stuck in a similar situation.

Dan Quinones is an Architect/Systems Engineer with over 11 years of experience specializing in Microsoft Server and Database technologies.