SSRS report subscriptions are a great feature for automatic report delivery on regular schedule. Unfortunately, there is no easy way to run a subscribed report on demand. If you need to run one of these reports on demand, you will need to dig into the Report Server database to find the right subscription. When it is needed to be run on demand more frequently, it becomes annoying and you lose valuable time.

This tip will show how this can be handled more elegantly by two new SSRS reports. One report will allow us to run individual subscriptions of reports and the second will allow to run all subscriptions handled by a schedule.

The automatic execution of report subscriptions is handled by SQL Server Agent. SSRS creates a separate agent job for each shared schedule and each individual schedule. The jobs are named by the GUIDs of that particular schedules as shown below which are not very useful.

If you take a closer look at the job created by SSRS you will notice that in fact the job does not executes the report itself, but instead it calls the [dbo].[AddEvent] stored procedure from the report server database to add an event into the [dbo].[Event] table.  Based on the subscription schedule there are 2 types of events - TimedSubscription or SharedSchedule.


The @EventType parameter of the [dbo].[AddEvent] stored procedure specifies a type of Schedule and the @EventData represents the GUID for the particular shared schedule or GUID of an individual subscription.

Our reports will use four different tables from the Report Server database.

The first report to develop will handle launching individual subscriptions 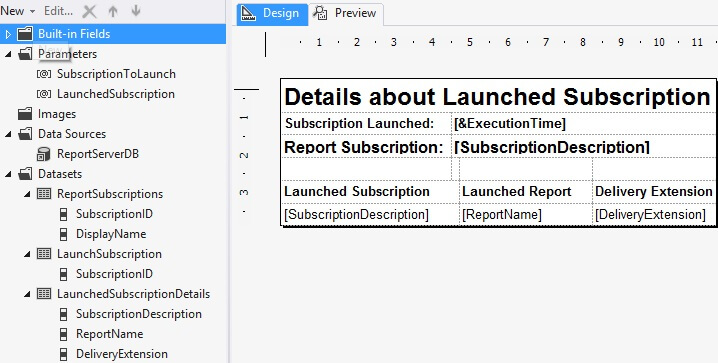 This dataset handles the execution of the subscription by calling the [dbo].[AddEvent] stored procedure in ReportServer database. Because the [dbo].[AddEvent] stored procedure does not return any record set, we have to return some information so the Dataset can be used by reporting services. Because of this, the query contains a SELECT statement, which returns the SubscriptionID. The @EventData variable is mapped to the SubscriptionToLaunch parameter.

The third dataset provides information about launched subscriptions. Data from this dataset are used on the report to inform users about subscription and report details.

Once you compose everything together, you can use the report for launching subscriptions. The final result will look like below.

The second report mentioned is used to execute shared schedules. When a shared schedule is launched, all the subscriptions using that shared schedule will be launched one by one. The structure of the report is the same as the previous report with only slight differences in the queries. 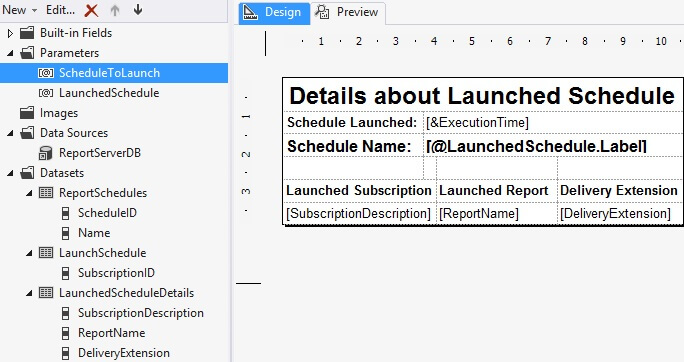 In contrast to the ReportSubscriptions query for the previous report, we will query only the names of the shared schedules. We get this information from the [dbo].[Schedules] table. As this table contains records for both SharedSchedules and also for TimedSubscriptions, we limit the results only to get the shared ones. Also we get only schedules for which a record in [dbo].[ReportSchedule] exists as we do not want to execute shared schedules without a report subscription.

The LaunchSchedule is similar to the LaunchSubscription query. The only difference is that instead of passing TimedSubscription as @EventType we will pass SharedShedule.

Once the report is composed, we can use it to launch subscriptions handled by shared schedules. The result will look like the image below.