How much overhead does encryption add to a SQL Server query

From visual inspection alone, one can deduce that decrypting an encrypted column using the DecryptByKey function in a SELECT statement will take longer than selecting the column stored in plain text. If you have been in the information technology industry long enough, you have probably heard the expression "this adds overhead" when discussing any extra processing added on to what is considered normal processing. I have heard this expression also, which leads me to ask the question "How can we quantify this additional overhead?"

For the next few steps, I used Nitansh Agarwal's tip on SQL Server Column Level Encryption Using Symmetric Keys as a guide.

I inserted 10,000,000 records into the table by running the following T-SQL code.

Next, I created the master encryption key. Of course, my password should be more complicated than the one shown below.

Then, I created a certificate named Certificate1.

Next, I created a symmetric key named SymmetricKey1 using the AES_128 algorithm and the certificate created in the previous step.

After creating the symmetric key, I updated the CreditCardNumberEncrypted column with the encrypted credit card number using the EncryptByKey function as shown in the follow T-SQL query.

Now, with our table loaded with plain text and encrypted credit card numbers, I created two SSIS packages to read from the table and write to a file. The only difference between the two packages is that one package selects the plain text column while the other package decrypts the encrypted column using the DecryptByKey function and then converts the result to a varchar(16). This results in the same amount of data to be written to the disk. For both packages, a variable will be used to pass in the number of records to select from the table.

The image below shows the query in the OLE DB Source Editor from the package that selects the plain text column. Notice how the query is stored as a string variable within the package. 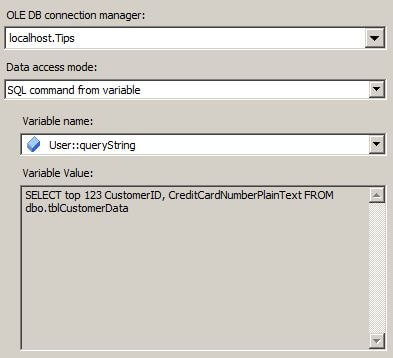 The next image shows the query in the OLE DB Source Editor from the package that decrypts the encrypted column. Notice how the symmetric key must be opened before the SELECT statement and the use of the DecryptByKey function. 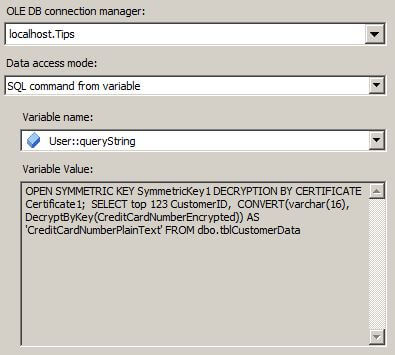 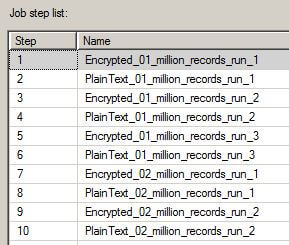 The average processing times for each package for each different number of selected records were calculated by querying the dbo.sysjobhistory table in the msdb database. The results are shown in the table below. 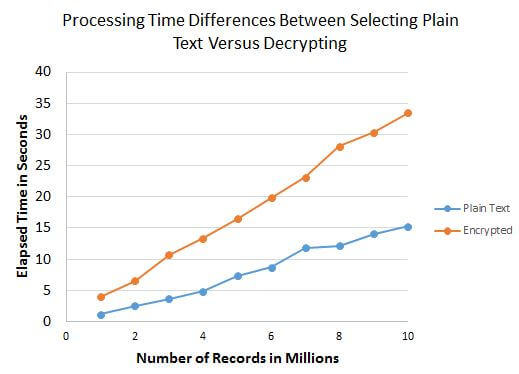 As we have seen in this tip, the additional processing time when using the DecryptByKey function becomes quite noticeable when working with large volumes of data, such as performing an extract of all records from a table containing over 1 million records. However, the additional processing time encountered when using the DecryptByKey function on one column for a single record will be virtually unnoticeable.

Please look at these other tips on MSSQLTips.com to learn more about column level encryption and querying job history data.

Encryption Protection for your Application and SQL Databases

Dr. Dallas Snider is an Assistant Professor in the Computer Science Department at the University of West Florida and has 18+ years of SQL experience.