Let's start with your first question. If you connect to SQL Server with administrative rights, execute the following query in the master database:

You'll see something akin to this:

With respect to the second question, the answer is simple: SQL Server encrypts the logon process. Older versions of SQL Server (2000 SP 2 and below) did not and, with respect to SQL Server logins, the encryption was trivial to break. Therefore, an attacker with the ability to see the network traffic had the ability to capture the username and the encrypted password, apply a simple algorithm to decrypt the password, and then log in to SQL Server using that username/password combination.

I say somehow because SQL Server doesn't let you backup the certificates it creates for itself. For instance:

And with the Dedicated Administrator Connection: 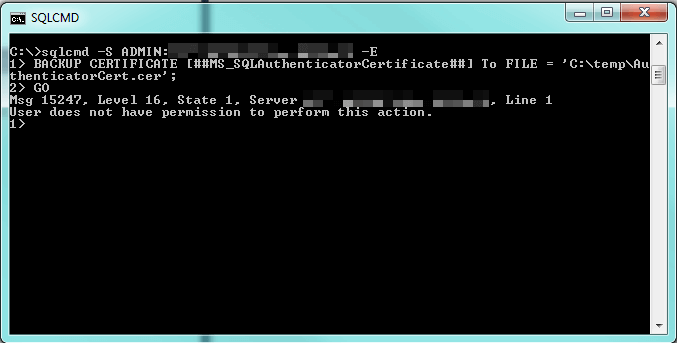 Therefore, there's no way within SQL Server to get the certificate. As a result, if you want to avoid the errors with your security scanner, you'll want to get a certificate that the scanner will trust issued to the computer where SQL Server is installed. There are some basic rules to be able to do this, according to Books Online:

This isn't as hard as it sounds. See the next steps section for a step-by-step tutorial on how to obtain and install such a certificate.