The SSIS data flow is all about buffers - see also Improve SSIS data flow buffer performance - and the classification of transformations is also based on how they handle buffers. Let's take a look at synchronous and asynchronous first:

The Union All is a quite often used transformation to combine different flows into one single flow. It is an asynchronous, semi-blocking transformation and in the following sections we will investigate the impact of this component on the performance of a package.

In a lot of scenarios, the performance of the Union All is acceptable, even for a larger amount of rows. There are cases though where the Union All degrades performance, especially when a large number of rows are extracted, but only a limited amount of rows fits in a single buffer. Let's create a big source table to begin with.

Using the AdventureWorks2012 sample data, which you can download here, we will take data from the SalesOrderDetail table and insert it multiple times in our source table.

The source table now contains 7,157,703 rows and takes about 600 megabytes of storage space. The SSIS package is going to read the data and retrieve the product surrogate key from the DimProduct dimension of the AdventureWorksDW2012 data warehouse using a Lookup. If a surrogate key cannot be retrieved, the ProductNumber is logged into an error table and at the same time it is still stored in the destination table using a dummy surrogate key value of -1.

The destination table has the following schema:

The data is extracted from the source table with the following query:

The product number is modified for every 10th row. This will make the lookup fail once in a while, so that the Union All can be tested. On my quite recent laptop, this query returns the 7 million rows in 35 seconds. However, the SSIS package will be slower as we will make the buffers smaller in order to make the Union All performance more visible.

SSIS Package to Test for UNION ALL Performance

The resulting SSIS package is straight forward. The control flow consists of 4 tasks: 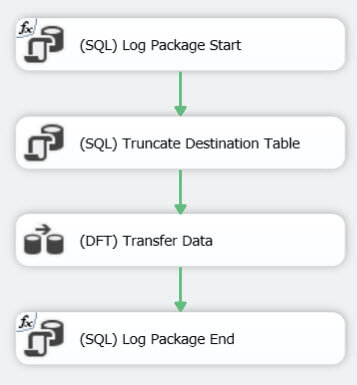 The data flow itself is a bit more complex, but not too dramatic. 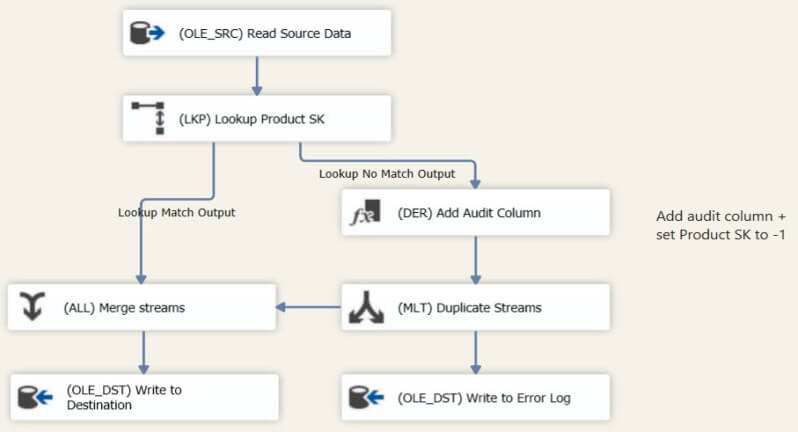 Next the flow is duplicated through a multicast. One output is sent to the error log, while the other is added to the "Match" output of the Lookup component through a Union All. This Union All component is the subject of this tip. Finally the rows are written to the Fact_Orders destination table.

To simulate a package under performance stress, the DefaultBufferMaxRows property is set to 1000. This results in relatively few rows being added to a buffer when the package is running, which is for example equivalent to having a lot of wide columns in your source table.

Removing the Union All in SSIS

Since the Union All is an asynchronous semi-blocking component, we can expect it will have some impact on performance. In many situations this performance impact is negligible, but as we will demonstrate, a semi-blocking component can slow a package down. The original package - with Union All - takes about 2 minutes and 29 seconds to run. Let's reorganize the layout and find out if we can make the package faster. 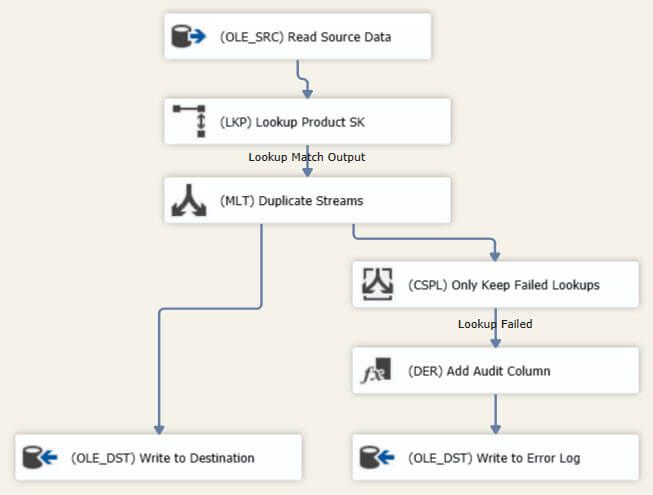 To get rid of the Union All, the Lookup component is configured to ignore failures. This means that if a row doesn't return a match, the retrieved columns are populated with NULL values.

Next, the flow is duplicated through a multicast transformation, which is also a synchronous non-blocking transformation. To find the rows with lookup failures, a conditional split - also synchronous - is used that will test the product surrogate key column for NULL values.

Only those rows are kept and sent to the derived column for the extra audit column, after which they are written to the error log. The other output of the multicast is sent directly to the destination table. The new data flow realizes exactly the same requirements as the original one, but now it doesn't have any asynchronous semi-blocking components. The entire data flow - with the exception of the source which is always asynchronous by the way - consists of synchronous non-blocking transformations. The package now runs in 1 minute and 59 seconds, an improvement of about 20%. 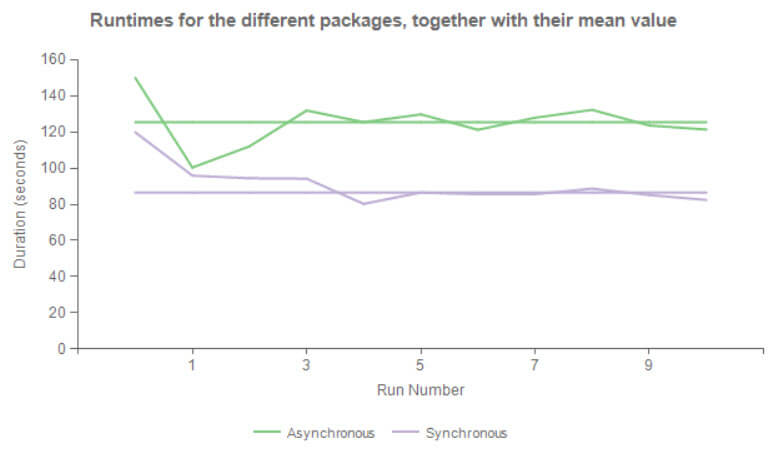 The package with the semi-blocking Union All has a mean runtime of about 125 seconds, while the optimized package has a mean runtime of 86 seconds. This results in about 31% performance improvement. The test package has only one lookup with an associated Union All. Imagine the performance improvement that can be reached if there were multiple lookups in the data flow.