In the first tip (SQL Server Integration Services (SSIS) - Best Practices - Part 1) of this series I wrote about SSIS design best practices. To continue down that path, this tip is going to cover recommendations related to the SQL Server Destination Adapter, asynchronous transformations, DefaultBufferMaxSize and DefaultBufferMaxRows, BufferTempStoragePath and BLOBTempStoragePath as well as the DelayValidation property.

In this tip my recommendations are related to different kinds of transformations, impacts for overall SSIS package performance, how memory is managed in SSIS by creating buffers, working with insufficient memory, how SSIS manages spooling when experiencing memory pressure and the significance of the DelayValidation property.

It is recommended to use the SQL Server Destination adapter, if your target is a local SQL Server database. It provides a similar level of data insertion performance as the Bulk Insert task and provides some additional benefits. With the SQL Server Destination adapter you can transformation the data before uploading it to the destination, which is not possible with Bulk Insert task. Apart from the options which are available with OLEDB destination adapter, you will get some more options with the SQL Server destination adapter as depicted in the images below. For example, you can specify whether the insert triggers on the target table should fire or not. By default this option is set to false which means no triggers on the destination table will fire. Enabling this option may cause an additional performance hit because the triggers need to fire, but the trigger logic may be needed to enforce data or business rules. Additional options include specifying the number of the first/last rows in the input to load, specifying the maximum number of errors which will cause the bulk load operation to be cancelled as well as specifying the insert column sort order which will be used during the upload process. 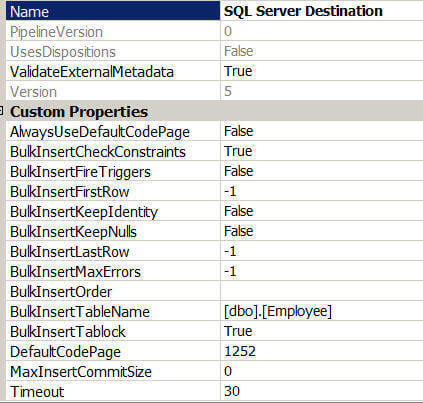 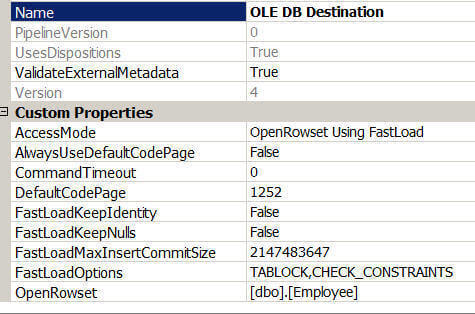 Synchronous transformations get a record, process it and pass it to the other transformation or destination in the sequence. The processing of a record is not dependent on the other incoming rows. Because synchronous transformations output the same number of records as the input, it does not require new buffers (processing is the done in the same incoming buffers i.e. in the same allocated memory) to be created and because of this it is normally faster. For example, in the Derived column transformation, it adds a new column in the each incoming row, but it does not add any additional records to the output.

As I said in the "Best Practices #6", the execution tree creates buffers for storing incoming rows and performing transformations. So how many buffers does it create? How many rows fit into a single buffer? How does it impact performance?

The number of buffer created is dependent on how many rows fit into a buffer and how many rows fit into a buffer dependent on few other factors. The first consideration is the estimated row size, which is the sum of the maximum sizes of all the columns from the incoming records. The second consideration is the DefaultBufferMaxSize property of the data flow task. This property specifies the default maximum size of a buffer. The default value is 10 MB and its upper and lower boundaries are constrained by two internal properties of SSIS which are MaxBufferSize (100MB) and MinBufferSize (64 KB). It means the size of a buffer can be as small as 64 KB and as large as 100 MB. The third factor is, DefaultBufferMaxRows which is again a property of data flow task which specifies the default number of rows in a buffer. Its default value is 10000.

Although SSIS does a good job in tuning for these properties in order to create a optimum number of buffers, if the size exceeds the DefaultBufferMaxSize then it reduces the rows in the buffer. For better buffer performance you can do two things. First you can remove unwanted columns from the source and set data type in each column appropriately, especially if your source is flat file. This will enable you to accommodate as many rows as possible in the buffer. Second, if your system has sufficient memory available, you can tune these properties to have a small number of large buffers, which could improve performance. Beware if you change the values of these properties to a point where page spooling (see Best Practices #8) begins, it adversely impacts performance. So before you set a value for these properties, first thoroughly testing in your environment and set the values appropriately.

You can enable logging of the BufferSizeTuning event to learn how many rows a buffer contains and you can monitor "Buffers spooled" performance counter to see if the SSIS has began page spooling. I will talk more about event logging and performance counters in my next tips of this series.

If there is a lack of memory resource i.e. Windows triggers a low memory notification event, memory overflow or memory pressure, the incoming records, except BLOBs, will be spooled to the file system by SSIS. The file system location is set by the BufferTempStoragePath of the data flow task. By default its value is blank, in that case the location will be based on the of value of the TEMP/TMP system variable.

Likewise SSIS may choose to write the BLOB data to the file system before sending it to the destination because BLOB data is typically large and cannot be stored in the SSIS buffer. Once again the file system location for the spooling BLOB data is set by the BLOBTempStoragePath property of the data flow task. By default its value is blank. In that case the location will be the value of the TEMP/TMP system variable. As I said, if you don't specify the values for these properties, the values of TEMP and TMP system variables will be considered as locations for spooling. The same information is recorded in the log if you enable logging of the PipelineInitialization event of the data flow task as shown below.

So far so good. What is important here is to change this default values of the BufferTempStoragePath/BLOBTempStoragePath properties and specify locations where the user executing the package (if the package is being executed by SQL Server Job, then SQL Server Agent service account) has access to these locations. Preferably both locations should refer to separate fast drives (with separate spindles) to maximize I/O throughput and improve performance.

Best Practice #9 - How DelayValidation property can help you

Let's consider a scenario where the first component of the package creates an object i.e. a temporary table, which is being referenced by the second component of the package. During package validation, the first component has not yet executed, so no object has been created causing a package validation failure when validating the second component. SSIS will throw a validation exception and will not start the package execution. So how will you get this package running in this common scenario?

To help you in this scenario, every component has a DelayValidation (default=FALSE) property. If you set it to TRUE, early validation will be skipped and the component will be validated only at the component level (late validation) which is during package execution.