This tutorial explains how lookups may highly decrease SSIS package performance and when they should only be used in Business Intelligence projects.

What is a lookup table?

As defined in Wikipedia, "In computer science, a lookup table (LUT) is an array that replaces runtime computation with a simpler array indexing operation. The process is termed as direct addressing… The savings in processing time can be significant because retrieving a value from memory is often faster than carrying out an expensive computation or input/output operation."

Lookup tables are mainly used to standardize and unify values within a text column in order to minimize the data size, ensure data integrity, and improve the data load performance. The values within a table are replaced with a code that points to the value stored within a lookup table. 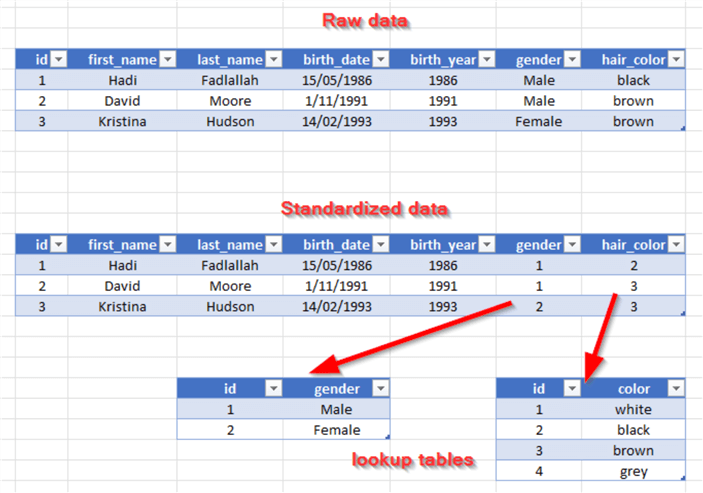 When should a lookup table be used?

After explaining what a lookup table is and how it is used, a question may come to mind: When should we standardize the values of a column and use a lookup table as a reference? Is it always a good solution?

There is no general answer to this question. The usage of lookup tables depends on the data's intended usage. For example, using a lookup table as reference data is highly recommended for a transactional database, while it may be less important when transferring data to an external system. In addition, it depends on the data type and number of distinct values; it is useless to standardize the values of "first names" while it is useful for other columns such as gender or city. 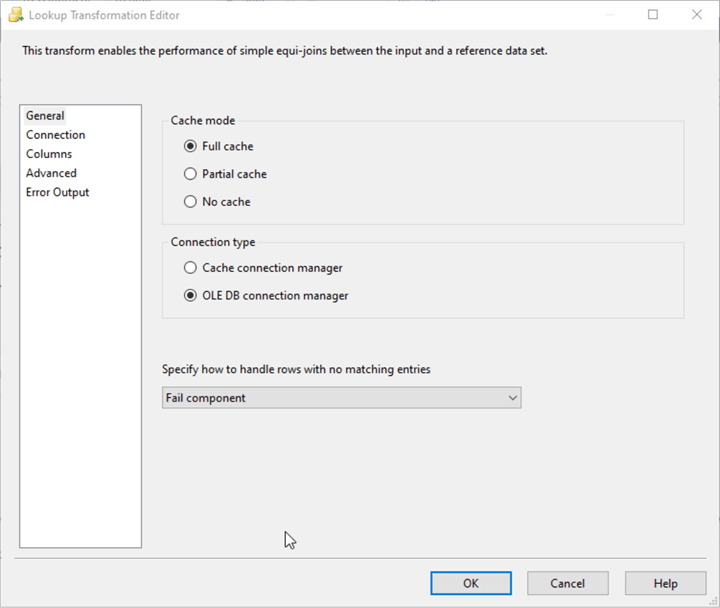 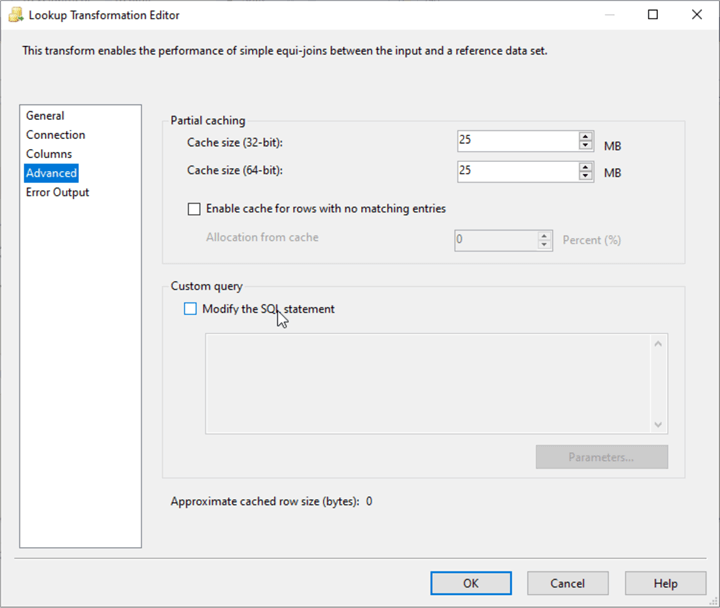 Why may a lookup transformation decrease the SSIS package performance?

After briefly describing this transformation, I will try to explain some of the bad habits that may decrease the lookup transformation performance in this section.

One of the most common misusages of the SSIS lookup transformation is dealing with a huge reference table. Why? This is due to:

A good alternative for this approach is performing the lookup transformation in the database engine rather than the data pipeline. We can use a SQL statement \ T-SQL code as a data access mode in the OLE DB source. This approach will let the SQL query optimizer benefit from all created indexes to improve the join operation and minimize the amount of data loaded, especially when using covering indexes.

Another alternative is to load the most commonly used values within the cache memory. We can use a cascading lookup pattern where one lookup uses the cache, with its No Match output falling through to a second lookup running in a partial cache mode to hit the database to handle the remaining rows.

Another reason to decrease the SSIS package performance is loading data several times during the same execution. This is one of the main purposes for developing the cache connection manager. For example, a lookup table containing information about countries can be used several times during an ETL job since it is used for different entities such as persons, locations, and organizations.

Using the lookup transformation several times within the package to load the data from the same table can highly affect the package performance if the data volume is considerable. While loading the data into a cache will reduce the number of data loads and decrease the disk reads and package execution time. In addition, if the lookup transformation is repeated within multiple packages, we can also decrease the amount of data load by saving the data into a cache file (.caw) and loading it using the cache connection manager.

The usual answer is NO. Using the cache connection manager is not always faster than OLE DB since the cost of disk access can out weight the benefits of pre-creating the cache.