What is the SQL Server Reporting Services RS.EXE utility? How can we use it with SSRS?  Check out this tip to learn more.

The SQL Server Reporting Services RS.EXE utility is a command line utility that can perform many scripted operation related to SQL Server Reporting Services (SSRS). It can be used to complete various administrative tasks including publishing reports and moving reports from one server to another server. Of course, with it being a command line utility, the RS.exe utility can be scripted and automated, and requires the use of a input file to tell the script "what to do". The list of actual tasks that can be performed is quite endless and includes:

Of course, as with any tools there are limitations and restrictions.

The RS.exe program is generally found in the default installation directory: Tools> Binn directory; for my SQL2012 installation the file was located in: C:\Program Files (x86)\Microsoft SQL Server\110\Tools\Binn. As you can see in the below screen print, this directory actually contains several of the executable files used in the configuration and running of SQL Server Reporting Services. 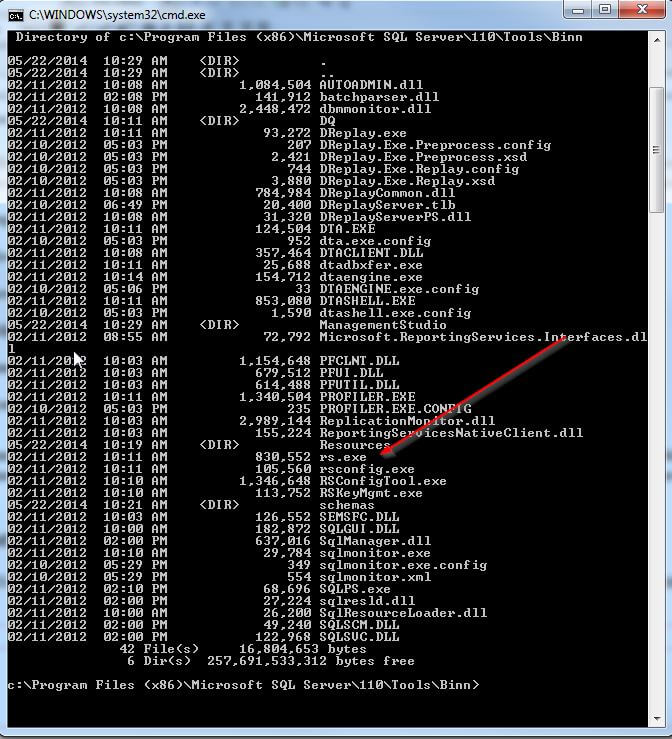 As with most executable files run at the command line, you can request help by using the "-?" argument after the command itself, as shown below. 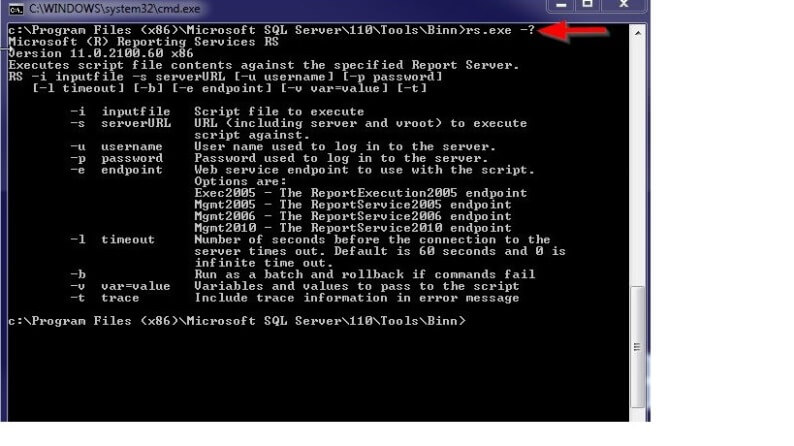 Based on the above screen print let us discuss each of the arguments that potentially could be added to your script.  Some, of course are straight forward where as others need additional explanation.

Script to Deploy a Report to SSRS with the RS.exec Utility

Remember the input file must be a VB.NET file which includes all the task to be performed. Any variables which are passed in the command line text do not have to be declared within the VB script itself. The first script we will utilize will deploy a report to our report server. The actual script command that needs to be run is included at the top of the script file, as displayed below. The command includes 3 variables:

Furthermore, the actual command also includes the name of the script file (-i argument) and the server name (-s argument). The remainder of the file is the VB script which will actually write the file to the report server; notice we named the file: PUBLISHREPORT.rss. The script includes some error checking (warnings) which will write to the console along with a final statement stating the report is published or returning the error message. The script actually deploys the report using the filestream method in VB (http://www.databasejournal.com/features/mssql/article.php/3802241/Working-with-FILESTREAM-using-VB-NET.htm)

Running the actual command is pretty straight forward. Notice in the below screen print that the report is published, and a message is noted that the report uses a shared data source which does not exist. (We could use another script to deploy the data source). 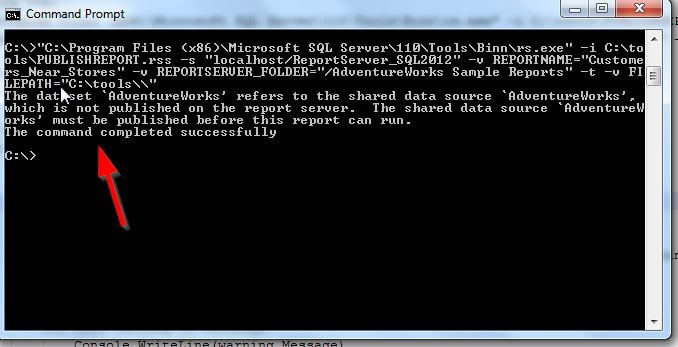 The final result of the script is we now have a new report published on the report server, all done at the command line. 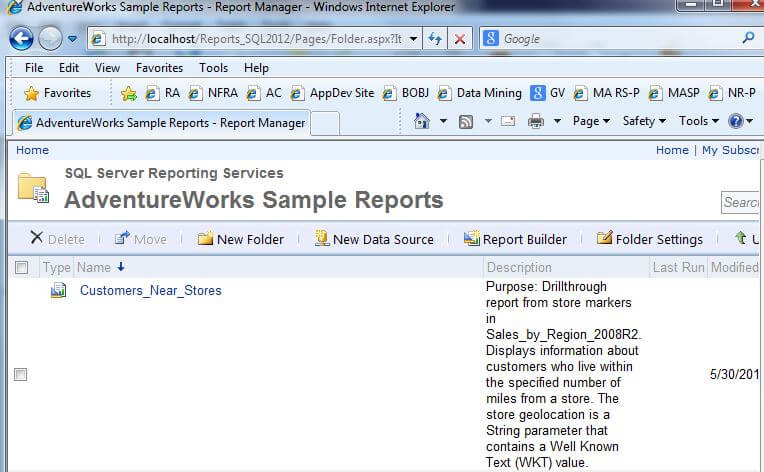 Export a Report with an SSRS Subscription with the RS.EXE

Now let us turn to a second script example which will export a report, like an SSRS subscription. This script also takes 3 variables:

Finally, the VB script is running through the process of running the report and then exporting it via the LoadReport, Render, and  FileStream methods. The file ultimately gets saved to the c:\tools directory.

The report, in PDF format, has now been exported successfully, as displayed in the next screen print. 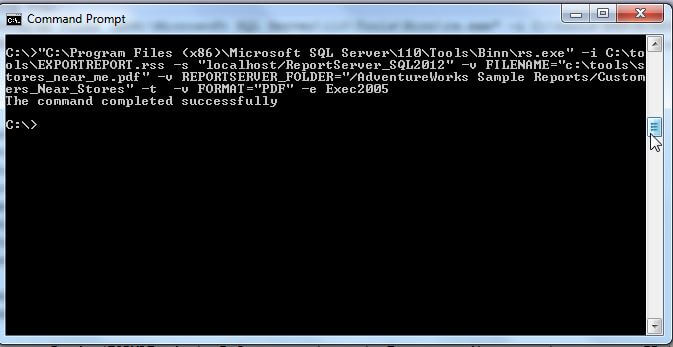 Checking the directory, we now see a pdf report with the name noted in the variable, and subsequently opening up the pdf displays the report. 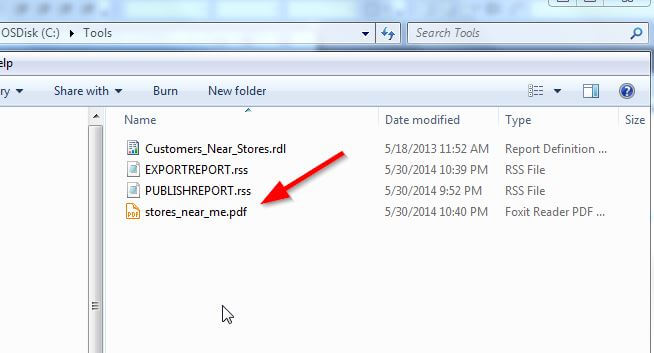 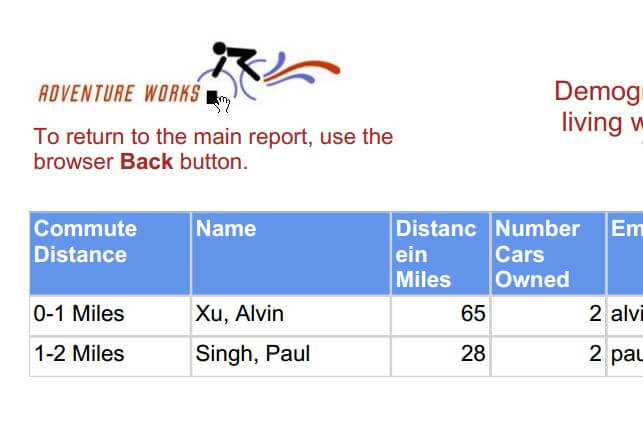 We could easily change the format to Excel by just switching the FORMAT variable to "EXCEL".

The RS.exe utility brings command line scripting to SSRS. The utility allows for the completion of many administrative and reporting tasks including report deployment, report exporting, and SSRS configuration. Certain arguments are required when running the utility including the input file and the SSRS server URL. The input file is the actual Visual Basic .Net script which includes the commands to be performed; the script can accept variables which are passed as part of the script arguments and then utilized by the VB code. Other arguments which can be included with the RS.exe command include specifying the user name and password used to connect to the report server, specifying the timeout, and turning on/off the logging of the script results to the SSRS log file. The RS.exe command provides a convenient and customizable command line utility for SSRS.