Online transaction processing applications are typically high throughput and insert or update-intensive. These applications are used concurrently by hundreds of users. By having the power plan left at Balanced, a server with low utilization can have the server component such as its CPU throttled back to save on power consumption.

The benefit to set the server power management to high performance is for SQL Server to have consistent, predictable and high performance. This additional processing capacity comes with higher power utilization. Hence, you will need to evaluate if your server requires very low response time and high throughput at any given time versus the increase of cost due to server power consumption when you select the High Performance power plan.

The Windows Server OS Power Options form is accessible from the Control Panel on Windows 2008 R2 and higher. The default power plan is Balanced by default. 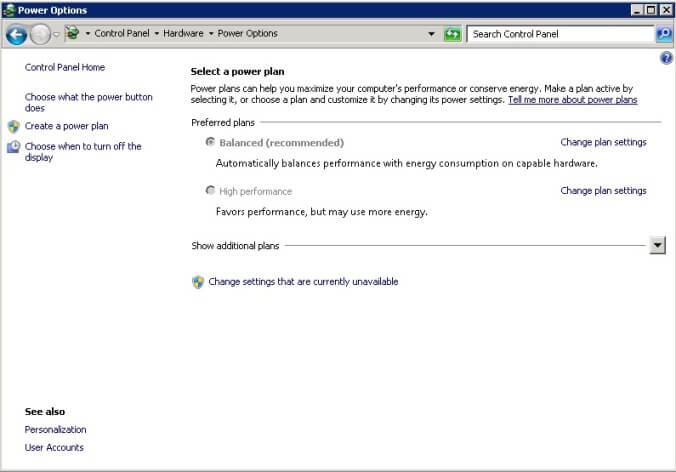 I am running Windows Server 2008 R2 Enterprise Edition with the default power plan of Balanced.

To illustrate the impact of the power plan, I will be comparing the performance of a light-weight query on the server under both power plans against the AdventureWorks2012 database. In this demonstration, all hardware and software resources will remain constant with the only change made in each test being the Windows Server power plan setting.

The sample query used for this test is as below. The query will be executed a number of times under Windows Server OS power plan of Balanced and High Performance.

SET STATISTICS TIME will be used to display the number of milliseconds (ms) required to parse, compile, and execute the query.

A brief explanation of SET STATISTICS TIME is as below:

For additional information, I have downloaded CPUID to check the CPU specification on the server. Under the Balanced power plan, the CPU core speed is 1.2GHz. This is where the CPU power saving kicks in by reducing the frequency multiplier (Core Multiplier) and the voltage (Core VID) when the server CPU is not under load. The combination of both multiplier and voltage is known as performance states (p-states) and this is what makes up a server power management profile. 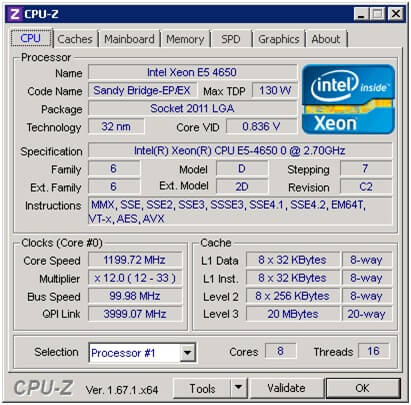 The result for the first query execution (Run 0) is discarded as it is meant to warm up the cache. The query is then subsequently executed 7 more times with results captured as below

When the Windows Server power plan is changed to High Performance, the CPU core speed now ramp up to 3.3GHz. You can see that CPU Clocks Multiplier is now at its maximum and the Core VID has also increased. 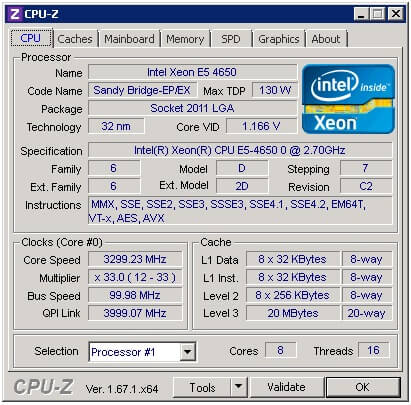 Under Windows OS High Performance power plan, the results are more consistent with the SQL Server parse and compile time closer to around 110ms compared to between 180ms and 200ms under the Balanced power plan. The overall SQL Server Execution Time has also improved from around 10ms to a more consistent 6ms. You may say there is 40% improvement, but mileage varies and this percentage is not linear where you expect a process that runs for 60 minutes would complete in 36 minutes. Assuming all other factors are constant, the power plan might reduce an hour process to 50 minutes for instance.

If power saving is a higher priority than fast and predictable performance, you might leave the power plan as Balanced. There could be an applicable scenario where a server is not used frequently and is left under the default Balanced power plan to conserve energy.