In preparation for SQL Server disaster recovery, I need to make sure I can recover the logins onto another SQL Server instance. What do I need to know?

Microsoft has a knowledgebase article, KB918992 - How to transfer logins and passwords between instances of SQL Server, which provides two essential stored procedures that you'll likely need. I say likely because if you're only dealing with Windows user and groups, you won't need those two stored procedures. So, for instance, if you're in the situation where you are dealing with SQL Servers that only have Windows authentication turned on, you can extract the logins using this simple query:

However, most folks have a combination of both, so let's talk about sp_helprevlogin.

Once you run the script in the KB article, you'll have two new stored procedures in your master database. One is used to translate the password hash into text form (sp_hexadecimal) and the other is what actually extracts the login with the appropriate information (sp_help_revlogin). The sp_help_revlogin is the stored procedure we will key in on. It produces the T-SQL code to recreate a login, even if it's a SQL Server login.

There are two ways to use sp_help_revlogin. The first way is without any parameters. This will produce a raw dump of every login. However, there's several we typically don't need. For instance:

The second way is to use sp_help_revlogin with a specific login:

Filtering Down the Logins

This is a simple script where we're filtering with the SELECT query to exclude the types of logins we don't want. Obviously, we want all Windows logins except those that start with NT AUTHORITY or NT SERVICE. We can shorten selecting those out by just looking at the first four characters. And for SQL Server-based logins, we don't want anything that starts with ##. Once we have the list of logins we care about, we simply need to loop through and call sp_help_revlogin for each one.

This is all well and good, but if you have a lot of servers, you don't want to have to run this manually each day against every server. If you take the script where we've filtered down the logins, that represents a good input file for SQLCMD. And if we can put it to the command-line, we can therefore use SQL Server Agent or any other automation engine (even Task Scheduler) to call SQLCMD and get an output file. For instance, here's what I'd use to call the query against a named instance (SQL2014) on a particular server (MySQLServer). The -E tells sqlcmd to connect as the Windows account running SQLCMD:

Obviously, you could use network paths for the .sql files such as \\MyDRFileServer\DRScripts$\sql2014_dr_logins.sql. You would want to make sure that the output file gets somewhere where it can be retrieved in the event of a real disaster. As for that output file, it should look something like this: 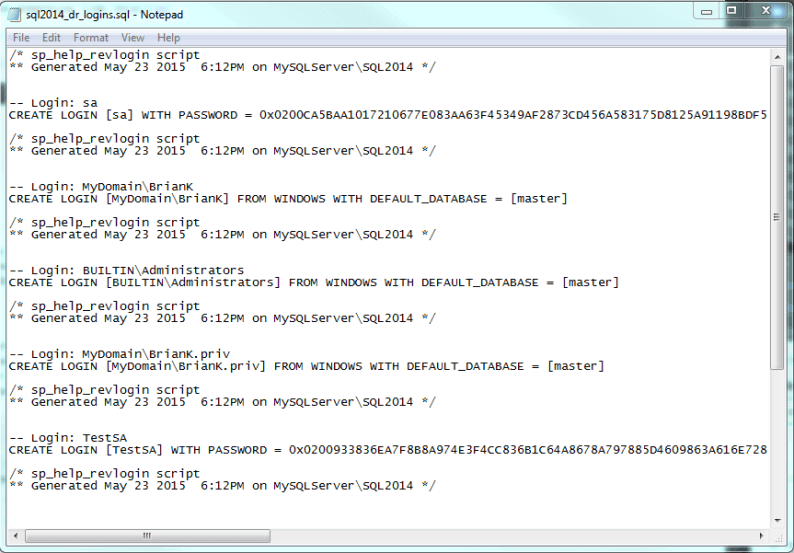 What About Matching Up SIDs?

If you understand how logins map into databases as users, you know the tie between the two is something called a SID, or Security IDentifier. If you were to just create a new SQL Server-based login (Windows logins aren't an issue because the SID comes from the Windows domain), a new SID would be generated. Obviously, if we're talking about a recovery situation, that won't work. We want the SID for the login to match the SID in the database. The good news is that sp_help_revlogin takes care of the SID as well because CREATE USER does have an option to specify the SID. This is how we keep things matched up. For instance, if I scroll over in that outfile from our SQLCMD command, we'll see that SID is being kept: 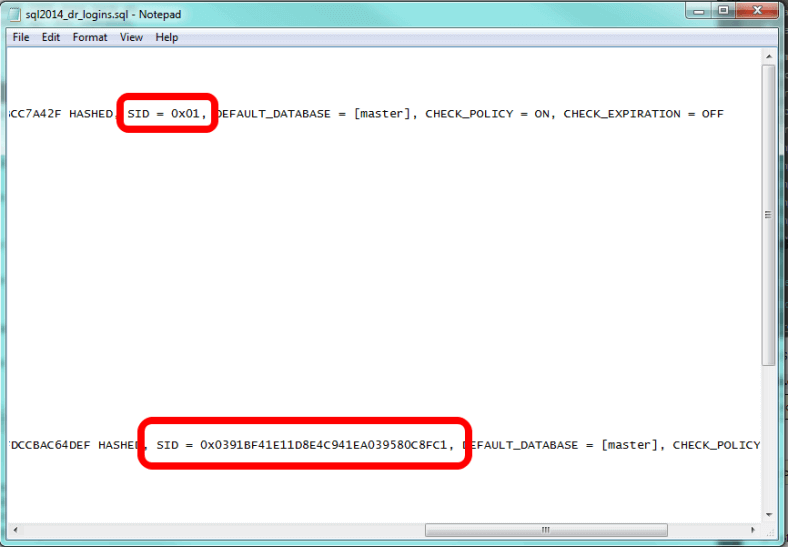 The first SID, for SA, is well known. it's always 0x01. However, the next SQL Server-based login we come to has a created SID. And we see that sp_help_revlogin does specify the parameter for CREATE LOGIN to ensure the SID will be maintained. Therefore, if you use sp_help_revlogin, you shouldn't have any issue with the SID matching up between the login and the user in the database. If for some reason you do, you can correct the situation by using sp_change_users_login.