How do you split a string that is delimited by a character into columns? In the past, database professionals have used number tables, tally tables, common table expressions (CTE), XML functions, CLR functions and brute force iterations to accomplish this task. In this tip we will look at the new function in SQL Server 2016.

In this tip we look at a real world business problem of importing data that is not formatted in a way that is easy to import.  We will look at how we can use the new STRING_SPLIT() to simplify parts of the process.

Microsoft SQL Server 2016 was released to manufacturing on June 1st. Please see this SQL Server Team BLOG for the full details. This product release contains a new function called STRING_SPLIT() that solves this business problem. The MSDN entry has full details on the function. Microsoft has adopted a cloud first release strategy. It is not surprising that this function is already available for Azure SQL Database.

For this example we will be using Azure, but this new function works in all versions of SQL Server 2016.

This article assumes you know how to create a Azure SQL Server and Azure SQL Database. If you are not familiar with these tasks, please see my earlier article on Azure Table Partitioning that goes over these basic steps.

Parsing web server logs for click stream information has been a common chore for data professionals. A quick search of the internet resulted in a web server LOG FILE from NASA's Kennedy Space Center. This log file has all visitor traffic for July, 1995. This file should be a good test case since it has over one million entries.

Our task is to parse the information from the file into a Azure SQL Database using just tools that come with SQL Server Management Studio download.

Our first task is to create a Azure SQL Server using my Visual Studio Enterprise subscription. The server is named mssqltips2016 and the administrator login name is jminer. 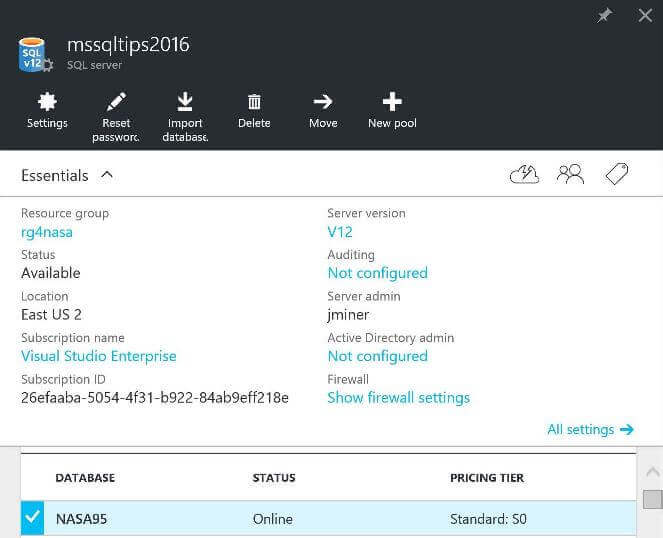 Our second task is to create a Azure SQL database named NASA95. This database resides in a resource group called rg4nasa that is located in the US EAST 2 data center. I choose the SO Standard as the database size. This gives use 10 database transaction units to perform data processing. 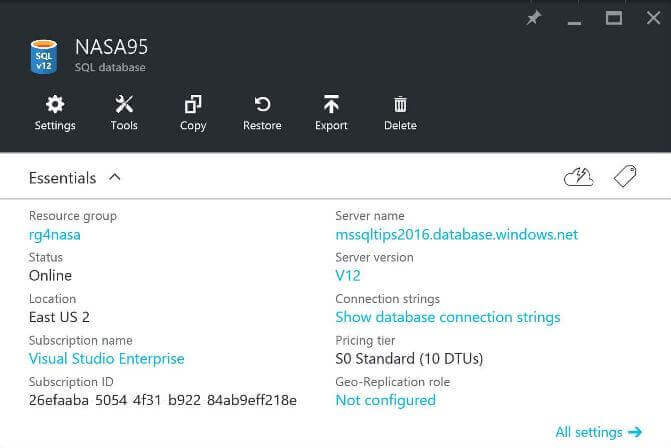 The first example use of the STRING_SPLIT() function fails since Azure SQL databases have a default compatibility level of 120 or SQL Server 2014. We need to change the level to 130 or SQL Server 2016 to use this new function. Executing a simple ALTER DATABASE statement fixes this issue.

The code below shows how to split the string containing the names of the three stooges into three columns. There are no side effects with this function. Empty columns or leading spaces or trailing spaces are not effected by calling this TABLE VALUE FUNCTION. Adding TRIM functions and a WHERE clause can eliminate these unwanted conditions.

The output from the above sample code is shown below. 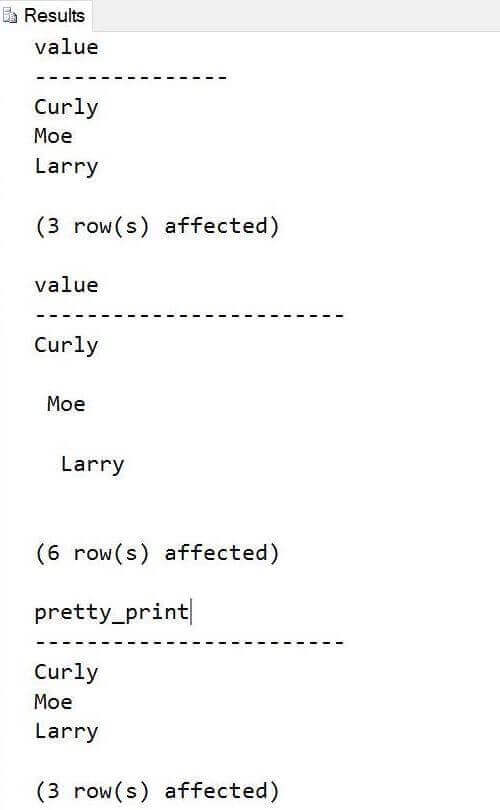 The data file from NASA is in a GZIP format since it was generated on a UNIX system. The 7-zip desktop program can be used to uncompress the file. The resulting text file is ten times bigger than the compressed one. Please see image below for file details.

The actual format of the text file has to be changed before processing. UNIX files only have line feeds while WINDOWS files have line feeds (LF) and carriage returns (CR). For more details, look at the newline article on Wikipedia. The notepad++ desktop program can be used to convert easily back and forth between formats. 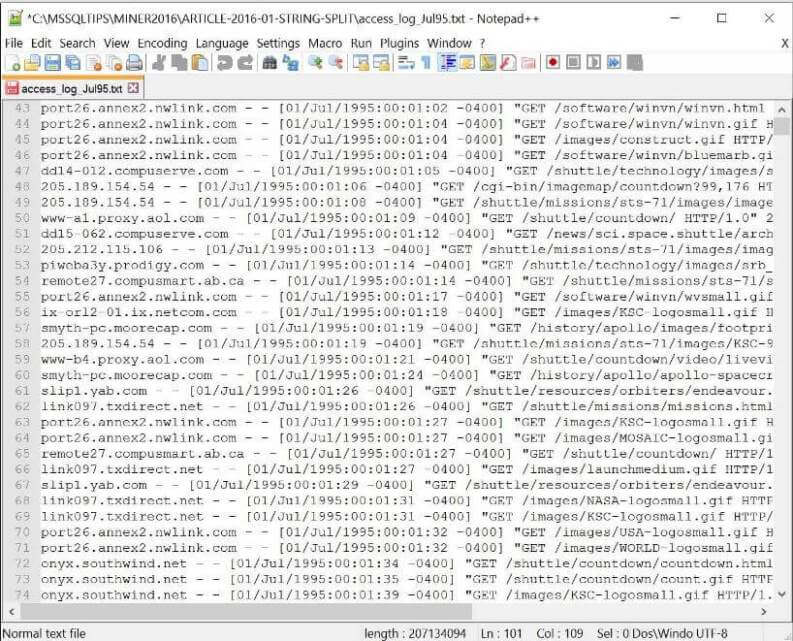 Now that we have our data file correctly uncompressed and formatted for loading, we can concentrate on designing a load process to transform the data into a nicely organized table.

Since the business problem stated that we need to use tools only included with the SQL Server Management Studio download, I am going to use the Bulk Copy Program (BCP) to load the raw data into a table named WEBLOGS. Each line of data will result in one row in this table.

The COLVALS table is where all the manipulation is going to occur. Each data row is going to be split into columns. Any transformations or cleanup will be performed in this table. The code below creates these two tables in the STAGE schema.

The nice thing about having different schemas is that I can create the final table also named WEBLOGS in the ACTIVE schema. Thus, we have two tables with the same name, but contain information at different points of processing.

I copied the NASA log file to the temporary directory named on the C drive and renamed it to make the command line invocation of BCP easier to read. The fully qualified Azure SQL Server and Azure SQL Database names are input parameters. The command line invocation of assumes that each line is terminated by a carriage return and each field is delimited by a tilde. I choose the tilde as a row delimiter since I knew there were no character matches in the input file.

Please see MSDN for the calling syntax of the BCP utility.

Since we did not set the batch commit size, it defaults to every 1000 records. We can see over 1 million records were loaded in 847 seconds. That is just over 14 minutes which is pretty good. 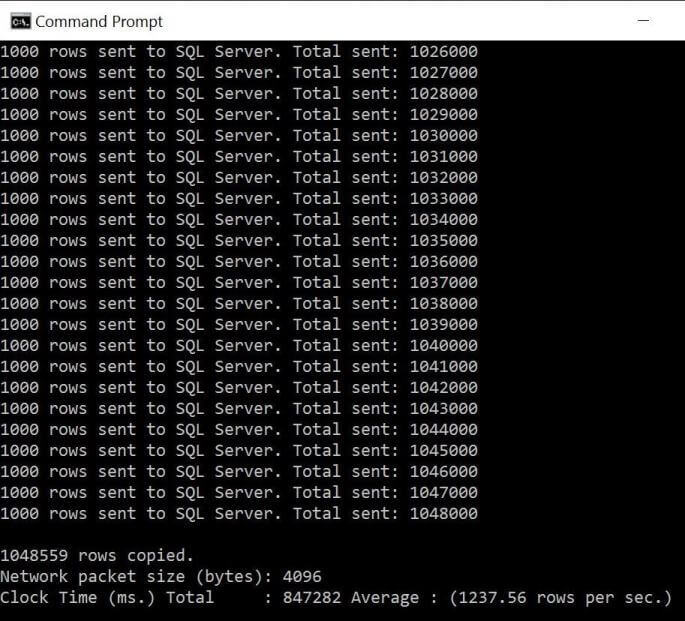 Most processes in the real world are limited by some type of bottle neck. This extract, transform and load process is no different. Using the resource utilization monitor, I noticed that the Database Transaction Units (DTU) are at 100%. Thus, the total time of this process can be reduced by increasing the database size. 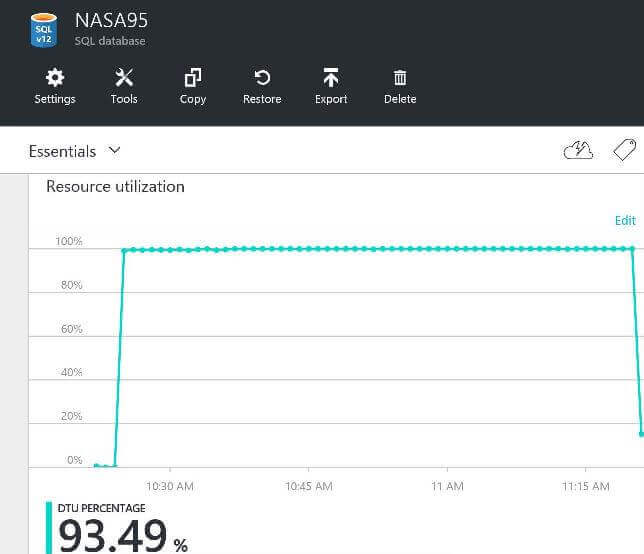 The best feature of cloud services is the ability to scale up or down resources when needed. As long as you are willing to pay some more money, we can change the database size to go faster. I decided to retry the same BCP load process using a S3 Standard size which has 10 times the processing. 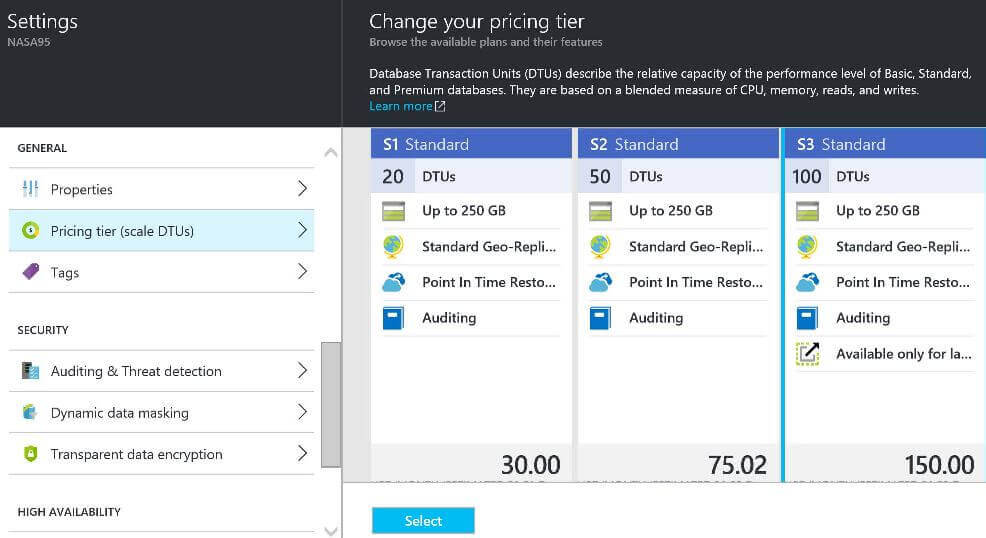 Depending upon what is changed, the requested action can take a couple minutes. Keep an eye on the notifications on the Azure Dashboard which will signal the completion of the request. Like most changes, it is always prudent to check the results of your action. The image below shows the new database size. 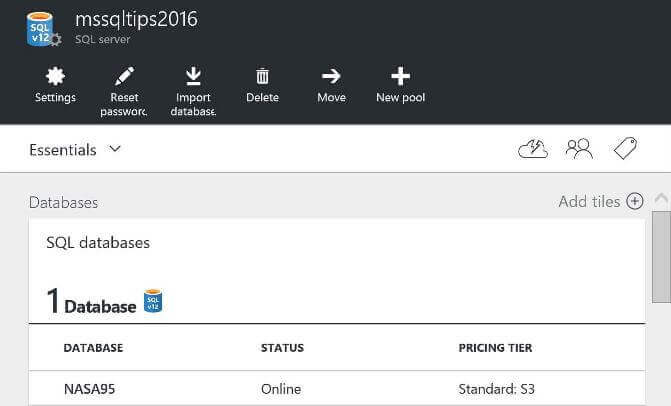 Again, we execute the above BCP execution from the command line. We can see over 1 million records were loaded in 317 seconds. That is just over 5 minutes which is awesome. Thus, we reduced the total time to load from file to staging table by 62.5%. 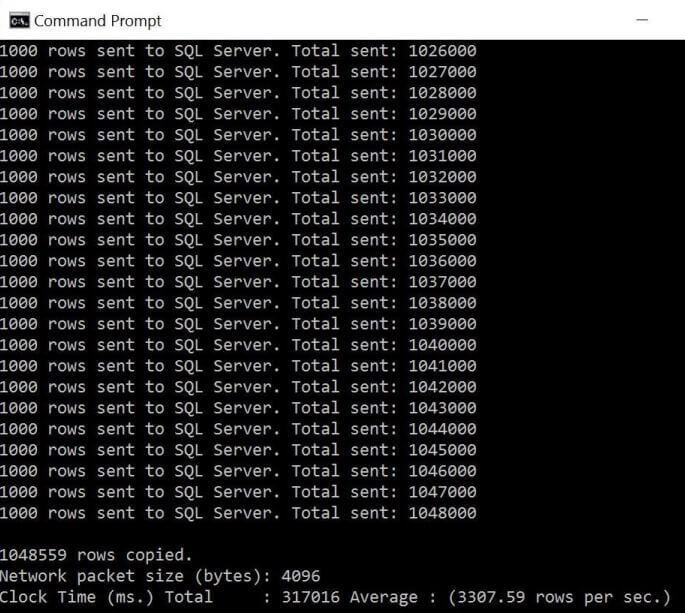 It is usually a good idea to test your T-SQL code with a large data set that represents many different combinations. I did notice that some fields contain one or more spaces. In reality, we only want one space between characters in our data.

Jeff Moden, who is a Microsoft Data Platform MVP, publish a combinatorics technique to remove spaces using replacement patterns. Please see this blog entry for the details. I leverage this technique in the complex CTE which translates the input data into columns.

The following algorithm is used by the CTE to move data from the STAGE.WEBLOGS table to the STAGE.COLVALS table.

Run the following T-SQL statements to check the translation of the first two rows.

It looks like most columns need a little more processing before we can insert the final results into the ACTIVE.WEBLOGS table. The nice thing about this row id, column id and column value table is the ability to insert further processing as different columns for the same row. 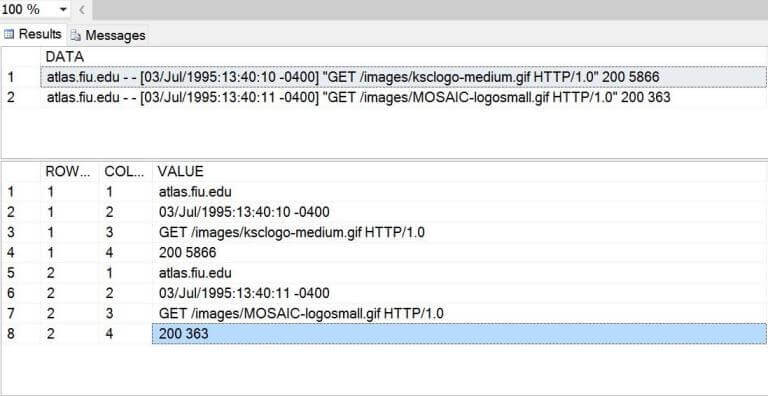 If each line of data parsed from the UNIX web log file was pristine, we should have four column lines for every input line. Inspecting the data revealed this was not the case. The image below shows a web entry without a corresponding line feed.

Rechecking the records counts after purging invalid records shows we now have only pristine records ready for more processing.

There are more transformations that need to be applied before the data can be inserted into the final table.

The forth column for each row contains both the status code of the web call and the number of bytes returned to the client. This data is delimited by a single space. We can call the STRING_SPLIT() function again to add this data as column id 5 and column id 6.

The second column contains an invalid date. We want to transform and save the date in a valid format as column id 9.

The code below contains the 4 T-SQL statements to massage the column data.

If we query the STAGE.COLVALS table for row id 1, we can see the initial import as columns 1 to 4 and the data transformations as columns 5 to 9. Now we have to select the columns that we want for each row and load the final target table. 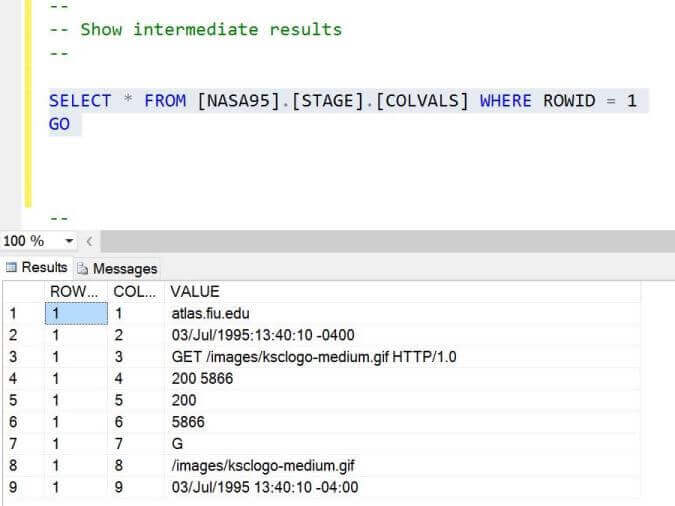 The ACTIVE.WEBLOGS (target) table can be loaded by selecting the correct columns. The speed of the load process can be increased by adding a non-clustered index on row and column id.

Before loading the target table, we need to use the SET IDENTITY_INSERT statement ON so that we can supply our own row id numbers for the identity column.

The common table expression below picks up the 6 columns of data from the source table and places it into the destination table.

Before loading the target table, we need to SET IDENTITY_INSERT statement OFF so that the identity column automatically increments for future inserts.

Executing a simple SELECT statement against the ACTIVE.WEBLOGS table shows the NASA WEB LOG data in the final format that we wanted. In short, our business problem is solved.

The new STRING_SPLIT() function works as advertised without any side effects. Today, we designed an ETL process to load data using the bulk copy program, massage data in a staging table and place the final results into an active table for analysis. All these steps could be bundled up into one SQL Agent Job to solve future business problems.

This solution was designed and implemented in Azure SQL Database. The cloud is a great place to work. If your process is resource bound, just change the database size to go faster. Of course, you will have to spend a few bucks to do this. However, you can use PowerShell to ramp up and ramp down the database size for intensive ETL processes.