As a SQL Server DBA, I frequently need to use the SQL Server BCP utility to export query data to a CSV file and then pass to other users or applications. However, I find there are some deficiencies with the BCP utility as listed below:

The following code will generate a table with 3 rows on my local SQL Server instance, and then I will use bcp.exe to export the SQL Server table to a text file.

Now in an Command window, we run this bcp.exe command

If I open "c:\temp\test.txt" with NotePad, I will see the following (I highlighted the blank spaces of interest)

Actually, if you look at line 3, you will see World , with leading/trailing blank spaces (the total string is 10 characters), this is because column [c] is defined as char(10), but in many cases users want the trailing spaces trimmed.

To solve the above mentioned issues, I wrote a PowerShell (PS) function to replace BCP utility's export function (with -c parameter). But make no mistake, this is not a replacement of the BCP utility, not even with any intention or attempt to do so. But it indeed saves me lots of time and effort to meet user requirements.

Now, I still use the previously created table and demo the use of different combinations of the function parameters

Here is the result in sequence: 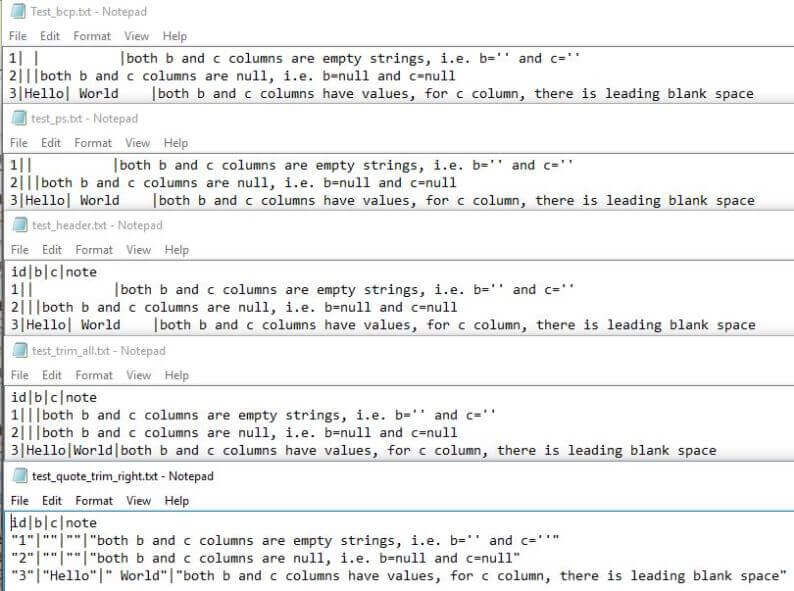 In this tip, a new PowerShell function is created to address some weakness in the original BCP.exe utility. Since this is not a compiled utility tool, the performance of this function is 30+ times slower than the BCP utility when big chunks of data need to be exported. For example, for about 20,000 rows in table [AdventureWorks2012].[Person].[Person], using the BCP utility in my environment it takes 0.6 seconds, while using bcp-data function it takes 18 seconds.

So if you are not concerned about performance, or your business requirements cannot be met due to BCP utility's "issues", the bcp-data function is a convenient alternative.

In some rare cases where you do not have bcp.exe installed, you can still use this PS function as it only relies on .Net framework 2.0+, more precisely, System.Data.dll.