Importing and exporting data from file-based sources is a very routine task when working with databases. Tools like SQL Server Management Studio provide out-of-box tools like the import and export wizards. But for large data sets there are other options to load data into SQL Server. In this tip, we will look at how to perform a bulk import of data into SQL Server using T-SQL.

Let's first understand the syntax and options of the BULK INSERT statement before we start using this command.

Below is the general syntax for the command. 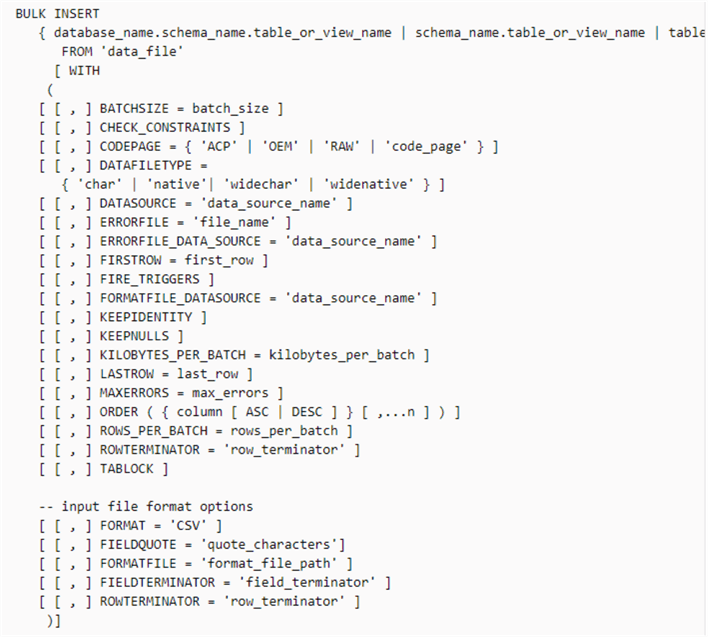 Having understood the syntax of BULK INSERT, now it's time to test it in practice.

First, we need a large set of sample data in a file format that can be used to insert the data into SQL Server. You can download a large sample file from here. This is a freely available zipped CSV file that contains 1.5 million records, which is reasonable volume to import into SQL Server for testing BULK INSERT. Once you download and open this file, it should look as shown below.

We have the source data in a ready format. We need to create a target to load this data. One way is to create a table having the identical schema as the source. But in real world scenarios, often there are more fields in the schema, at least for auditing like created date, updated date, etc. So, let's create a table having all the above fields, and at least one additional field for auditing like created data as shown in the below script.

Open SSMS, modify the above script as needed and execute in the context of database where you want to create the target table as shown below. 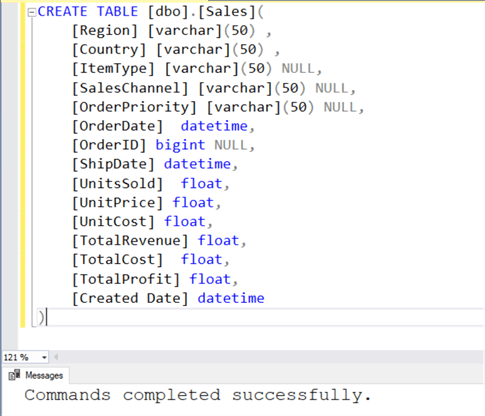 Our source and target are ready, so now we can fire the BULK INSERT command. We already learned about the syntax, so you should be able to understand what we are trying to do in the below script. Ensure that the path is correct where you have placed your CSV file. For testing purposes, I have set maximum errors to 2.

Execute this script and you would find the errors shown below. The primary reason is that we have an extra field (Created Date) in the target schema which is not in the source. Due to that, during the load we encountered multiple errors, and after two errors the load process was terminated as it crossed our threshold of the 2 error max.

Right at the start of the tip we learned that we can load data in a table or view, as shown in the syntax. So, let's create a view that has a schema identical to the source file, as shown below. I have named the view SalesView, so that during the load we can be sure that we are using the view to bulk load the data and not the actual table. 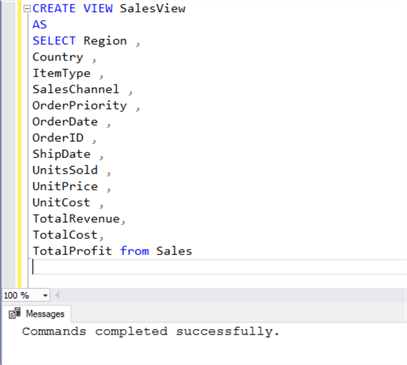 After creating the view, run the same script again, but first change to the view name instead of the table name. Once you execute the script, it may take a few seconds and you will see the data getting loaded in increments of 250,000. This is an effect of the BATCHSIZE parameter that we specified while executing the BULK INSERT statement. 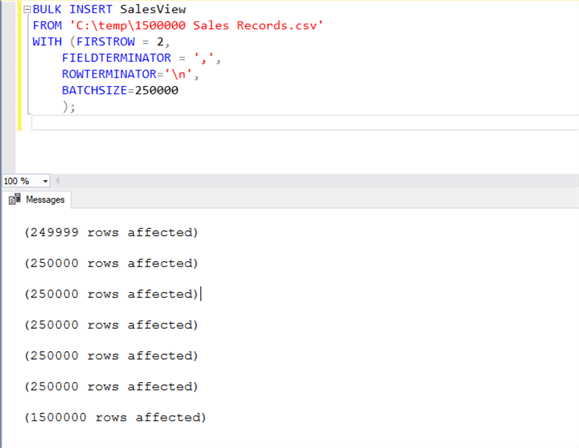 After the data is inserted you can select a few records and you will find that the data was loaded as expected and the created date field has empty values, as we neither provided a default value for it nor a computed formula.

In this way, using the BULK INSERT statement one can easily import data from an external source very easily into SQL Server just with a single statement.

ETL vs ELT Features and Use Cases