We often need to import data into SQL Server from a file. Sometimes unwanted end of line characters are part of the source file and these can create issues when importing the data. One of the ways to avoid this issue is to use SQL Server Integration Services (SSIS), but it doesn't always make sense to use SSIS for simple operations. So I use BULK INSERT and I sometimes face issues with Line Feeds and Carriage Returns. In this tip I cover some examples and how to fix the issue.

In this tip we will discuss how to use the ROWTERMINATOR to exclude control characters, so the import is successful. I have sample data with the name and location of a person in a text file and I need to import this into a table named NameLocation in my database.

As you can see below, the source file row terminators can look different depending on where the data comes from.

Here is data from a Mac.  You can see it only shows CR (carriage return) at the end of each line.

Here is a file from Unix. You can see it only shows LF (line feed) at the end of each line.

Here is a file from Windows.  You can see it shows CR and LF (carriage return and line feed) at the end of each line.

If we do a straight BULK INSERT, we can see that no records are loaded.

If we do a straight BULK INSERT, we can see that no records are loaded.

I tried a bunch of other options which should work to import the file into SQL Server.

The New Line character isn't recognized and it gives us an error as shown in the below image. 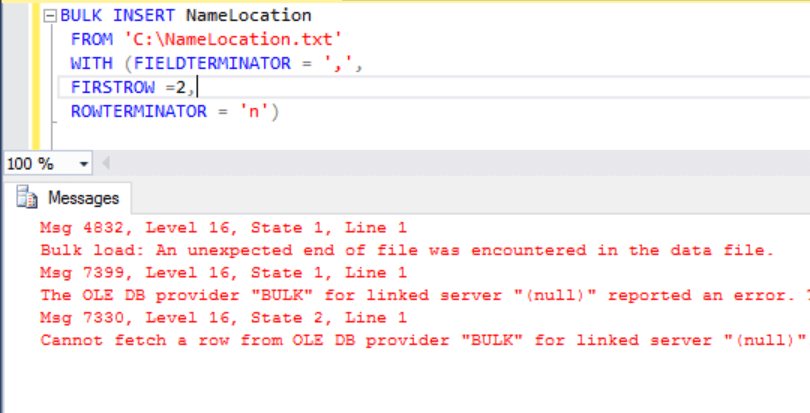 The Carriage Return gets recognized, but it divides the entire data into two columns which is not what is expected. So again the result is wrong. 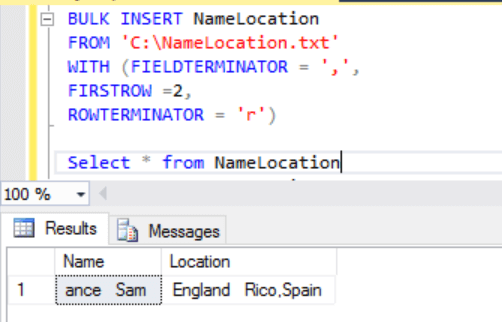 If we use char(10) which is a line feed equivalent character code, it will execute but without any results being pulled. 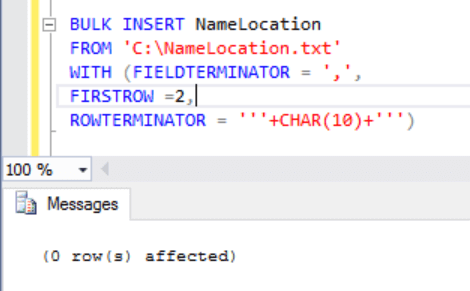 Finally, after everything I have tried, it seems the only option that works is to use the hexadecimal equivalent value of line feed character and it will pull the results as shown below. 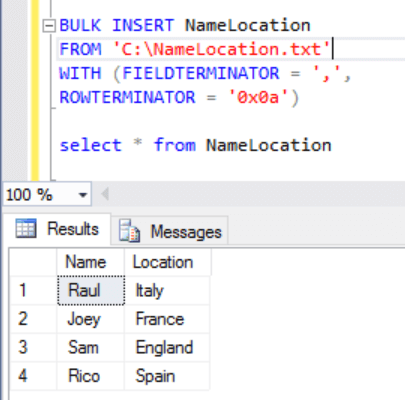 Note: Windows files should have a CR LF at the end of each line.  If that is the case, there is not a need to use the row terminator option, because the data should load fine.  I only used it for this example to show you what works and what does not work.

Try and use hexadecimal values to identify control characters in bulk insert operations for a smooth bulk insert transaction.