A lot of the performance issues in SQL Server often relate to slow running queries. In my last tip I showed you a method for finding long running queries using SQL Profiler. What if after you find this long running query you notice that sometimes the query runs quickly, but other times it's really slow and it both cases it's not using a lot of system resources. In this case it might not be the query itself that is causing the issue, but another query that is blocking this one. This tip will show you how you can use SQL Profiler to find blocking queries in a SQL Server instance.

As mentioned in my last tip and my tutorial I am a big fan of using the SQL Profiler tool to identify or measure query performance. This tip will show how we can use this tool to identify any queries in our SQL Server instance that are causing performance issues by blocking other queries from completing.

For this example we will use the AdventureWorks database for SQL Server 2014. If you don't have a copy of this database you can download it and other samples from the following link, Adventure Works 2014 Sample Databases. In addition to this we will also need a couple of queries to simulate a blocking issue in our SQL Server instance. We will do this by running a simple update statement within a transaction in one session and in another session we will try to select this record we are updating. Note that in order to see the blocking we will not commit the transaction in the first session. Below is the T-SQL for each of these sessions, but don't run this yet until we setup Profiler to capture the data which we walk through below.

As mentioned in the tutorial, you will need to set the blocked process threshold in order for the report to be generated as it is disabled by default. Keep in mind that depending on the amount of blocking in your system you may want to set this a little bit higher to start with as you don't want to be flooded with reports if you set it too low. Since this is just a test system and we don't want to wait a long time for the report to be generated we will set the interval to 2 seconds for this example. Below is the T-SQL to update this configuration.

Once the threshold has been configured we are ready to setup our SQL Profiler session. Since we've done this many times before we'll just look at what is required in the "Events Selection" tab in order to capture the blocking sessions in our trace. You can see from the screenshot below of the setup that we don't need to have too many options selected. In fact you could get by selecting only the TextData column as all other information is included in the xml stored in this column. I do include some other columns as they are helpful when just looking at the output window. 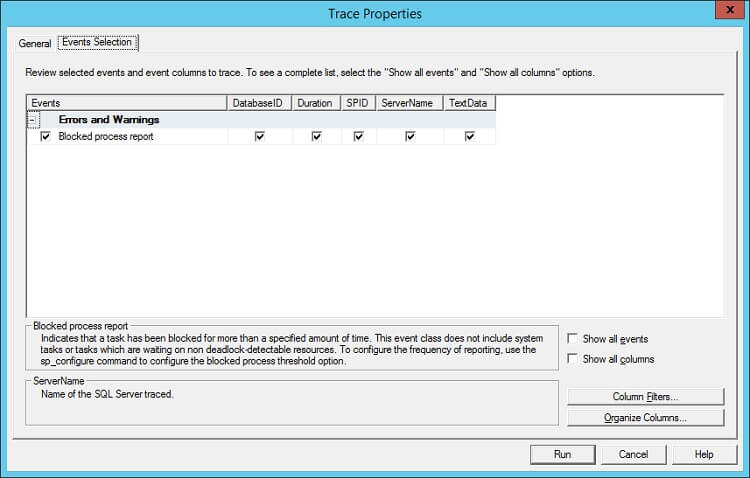 Now that all of the setup is complete all that is left to do is start our SQL Profiler trace and then execute each of the above queries in separate sessions. A few seconds after we start the SELECT statement we should get a record in our trace for the blocked process report. This link, BlockedProcessReport.xml, shows the entire xml that you should see in your trace. Below I show a portion of this xml as want to highlight some of the more important data values.

There are 4 main items I'd like to highlight in this XML output.