You are experiencing high query execution times. You as the SQL Server DBA decide that updating database statistics is one possible solution to the problem, but your boss says that it will cause blocking and advises not to update statistics while the database is being used. In this tip I show that doing a statistics update does not cause blocking.

This is a hot topic in the SQL Server DBA community. Some people say that a statistics update blocks transactional activity. They say that the performance of the application running on top of SQL Server runs slower when the statistics are being updated, but there may be other reasons that may degrade performance like the intense disk activity produced when updating statistics.

In this tip, we will cover a scenario where we update statistics while the database is being used to see if blocking does occur during the statistics update.

In order to analyze the behavior of updating statistics, first we need to create a sample database with the option AUTO_UPDATE_STATISTICS set to OFF.

Now we create a test table with an index.

You can use Tibor Nagy's tip Populating a SQL Server Test Database with Random Data to fill the previous table with data. Please consider that you should add enough data that gives you time when running the statistics update to run Dynamic Management View queries in another session to see what is occurring.

After populating the table with data it’s time to run the statistics update.

The following image is a screen capture of the output of the previous query in my test environment. 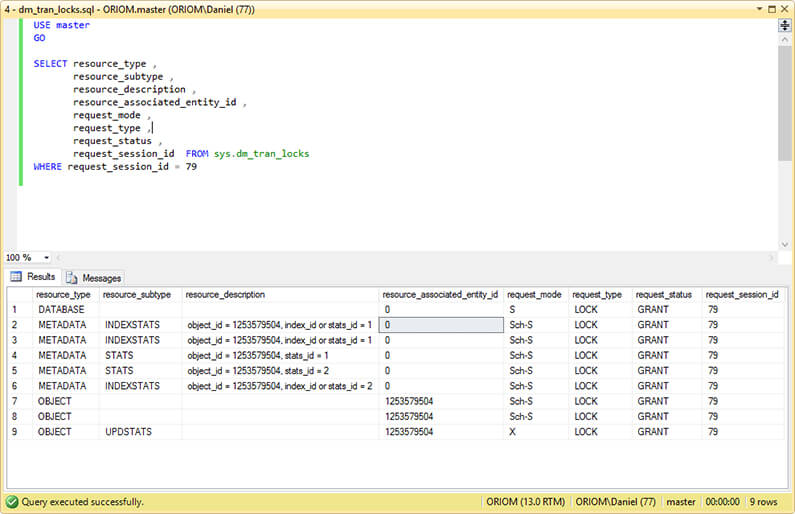 In order to analyze the previous query results, I included a short version of the table available from MSDN with the description of the sys.dm_tran_locks columns.

Rows two through six tell us that we have locks on the table metadata. You can see on resource_description column the object_id as well as index_id (when resource_subtype is INDEXSTATS) or stats_id (when resource_subtype is STATS). If we look at the request_mode column we can see that the locks are schema stability locks (Sch-S) which is compatible with all lock modes except the schema modification (Sch-M) lock mode.

The last row is the only row that shows an Exclusive lock in the table, but it is of subtype UPDSTATS. If you look back at the table with the column descriptions, you can see that it says different subtypes do not conflict with each other. In other words, the only thing that’s being locked exclusively is the statistics.

So based on this analysis, we can see that the update statistics does not cause blocking issues.