Data exploration is a routine exercise for data hosted in different repositories like OLTP databases, data warehouses and even data marts. Developing reports to explore data graphically is a time-intensive process. Database developers as well as analysts often encounter ad-hoc, urgent, last-minute requests to analyze and report data points of interests to the end user. In such cases, there is no time for developing stored procedures and reports. Mostly in such circumstances, developers execute a complex query and dump the data in a text or Excel file and share the data. This does not solve the purpose of rapid analysis and in cases of large dataset analysis in a tabular format does not help. The need is to develop quick graphic data snapshots which can be shared with end-users to present an initial level of analysis until well-crafted reports are designed, develop and deployed.

SQL Server 2016 and higher supports execution of R scripts from T-SQL code, which can be used to quickly create graphs with minimal effort for data analysis.  In this tip, we will use NFL data to show how this can be done.  We will look at three different types of charts that can be generated and then show the R code that can be used to generate the charts.

Let’s say we intend to explore a sample dataset and derive some analysis. You can use any dataset that you may have, but for the purpose of this demonstration I will use a NFL dataset which is available from this wiki page.

As our use case is that the data has to be analyzed from a data repository, you can just create a table in your database and copy and paste the data from the wiki page. Let’s call this table NFLTest and let’s say that our intention is to find records that are probable performance outliers in this dataset.

Here is a sub-set of what the data looks like. 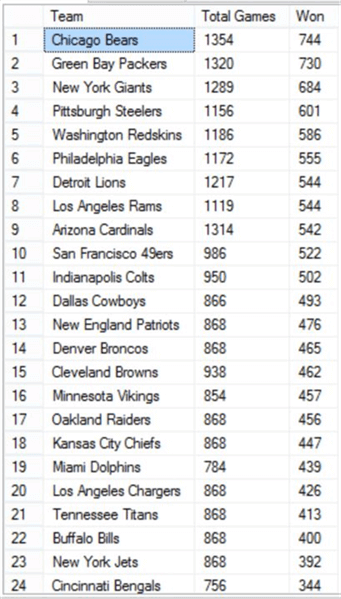 Let’s say you have thousands or millions of records in a table, in that case you may want to start the analysis by taking stock of how the distribution looks for a particular field of interest. In our case the number of matches won by a team is a performance parameter for us. If we create a dot chart of matches won by each team, the chart would look like below. 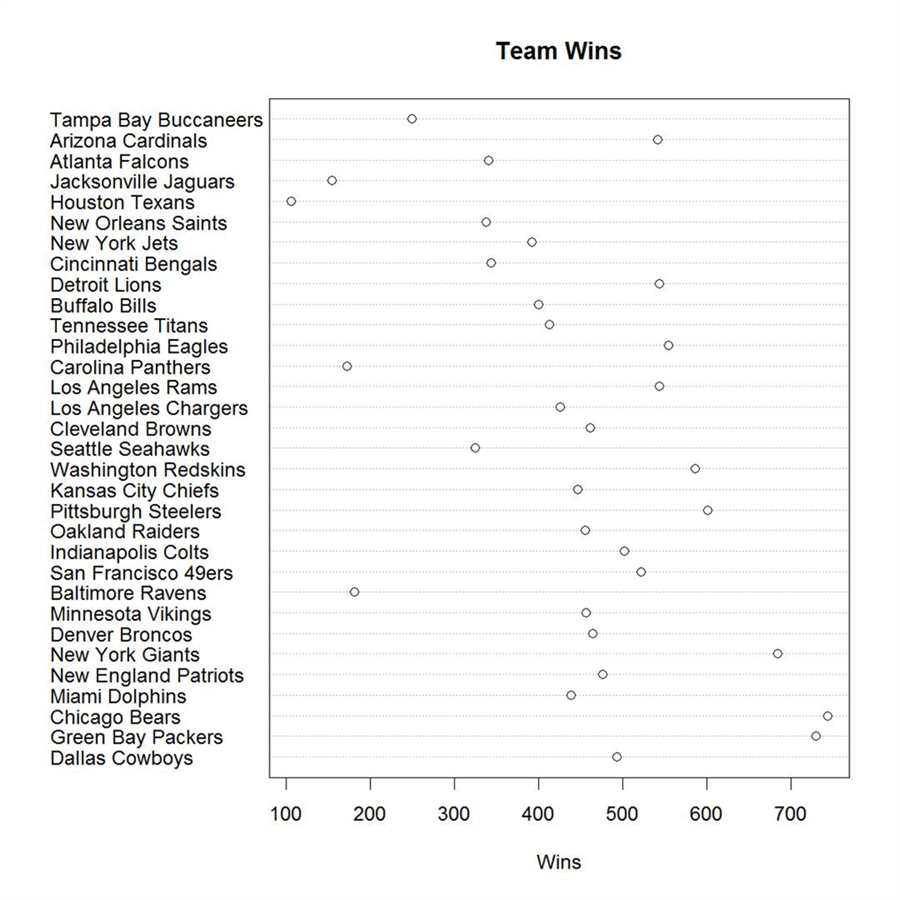 From the above chart you can see that there are a few teams that have won between 600 and 700 matches, and a few have won more than 700 matches. In a large dataset, you may have hundreds or thousands of points, so this dot chart might not be very helpful.

A histogram chart is an ideal way of analyzing the distribution, which would look like below. 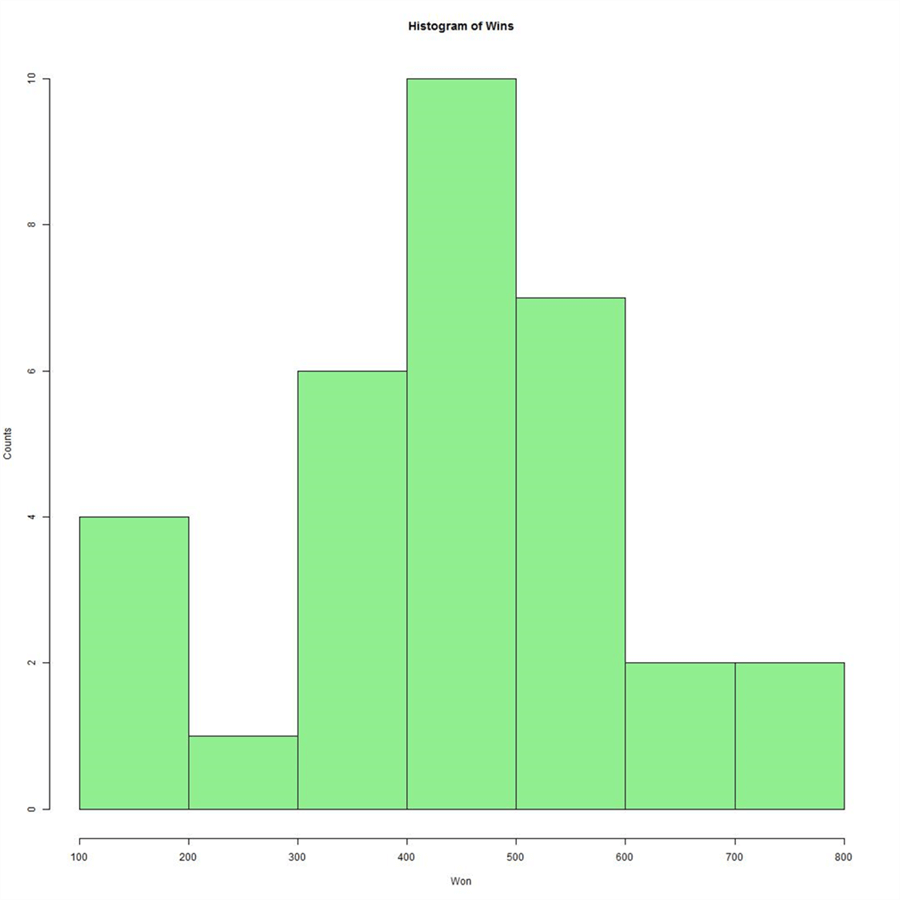 If two teams have played the same number of matches and still have lesser wins, then that can be a possible performance differentiator. This can be analyzed by a scatterplot chart as shown below. 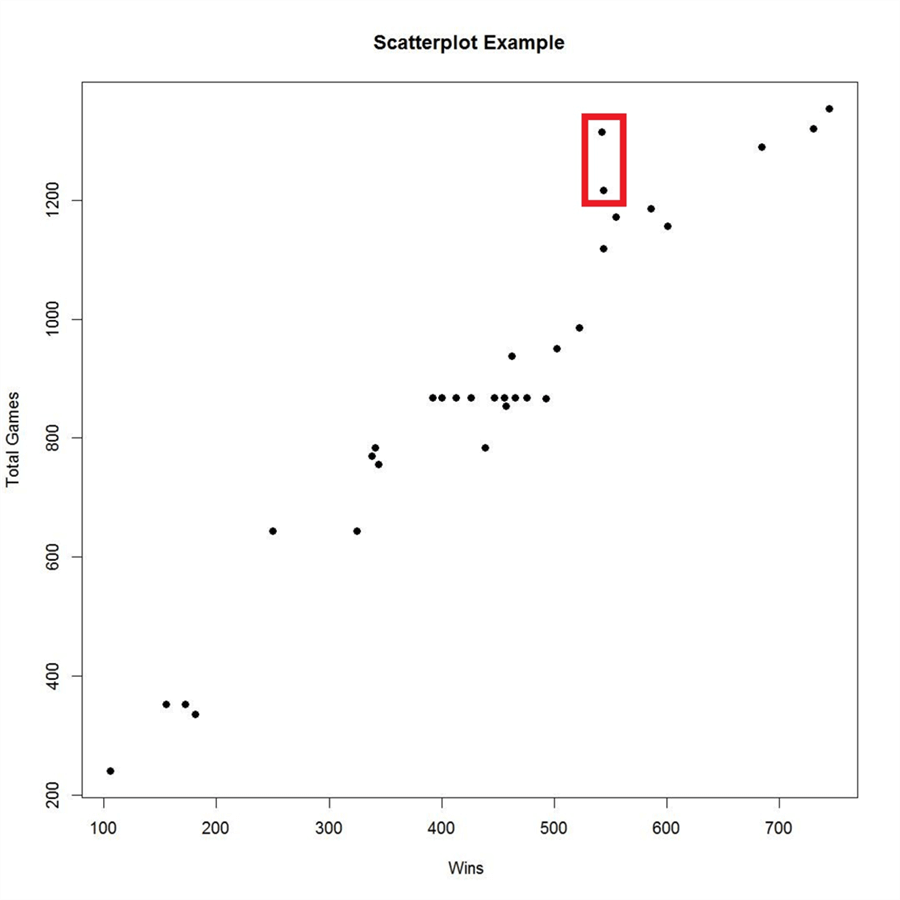 If you analyze the above chart, you will find that as the number of matches increases, the correspondingly number of wins increases. Of course, it’s not an exact linear relationship and there may still be other factors affecting this relationship.

If you analyze the points in the red box above, you will find that these teams have played a comparatively large number of matches, but the wins are quite less. Now if you take a look at the tabular view of the data as shown below, records 7 and 9 are the ones which have played more than 1200 matches, but still have wins in the range of 500-600. Compared to this, teams in records 1, 2, 3 and 4 have wins in the range of 600 – 700 for total games above 1200 – 1300. So records 7 and 9 can be considered a probable outlier as their wins are not proportionate to the number of matches and can be passed on to the data experts for further analysis.

Code to Generate Charts with R

So how can we generate these kind of graphs using T-SQL for quick analysis, without involving SSRS or dumping data in Excel? This can be solved by using R scripts in T-SQL from SSMS. The above graphs were generated by the below code.

Here we are using the jpeg function to specify the path of the file where we want the chart to be saved along with details of the resolution.

Then we are using functions like dotchart, hist and plot to create the different kinds of charts.

The dataset being used is passed by the @sqlquery parameter where we are just reading the fields from a table. To use this data inside the R script, we are using the default dataset name – InputDataSet and referring to the fields using the $ sign (i.e. InputDataSet$Won). Also, inside the charting functions we are providing charting related details like color, x-axis label, y-axis label, main, etc.

With this we create 3 graphs with just 6 lines of R script inside the T-SQL sp_execute_external_script stored procedure. When you execute this code, the jpeg function creates the graphic device to which the plotting functions render the output and three jpeg files with the respective charts are saved in the file path specified in the code.

This analysis may require further research on how other factors are affecting the relationship, but the intention of discovering interesting data points quickly is achieved. Such quick graphical analysis can be achieved with SSMS, T-SQL and a few lines of R script, allowing developers to have more insight into the data with lesser efforts and without the need of external reporting tools.