With the release of SQL Server 2016, many new features and improvements were introduced for all its products. SQL Server Analysis Services (SSAS) is no exception, but it should be noted most changes are for SSAS Tabular, the in-memory columnar database. Over the past months, a couple of tips have been written about the changes in SSAS. This tip gives a comprehensive overview of all the new features and links back to the original tips for more details if applicable. Azure Analysis Services is not included in this overview.

The DAX formula and query language received a long-needed update. Variables were introduced, as well as over 50 new functions. Writing DAX became easier, with improved Intellisense, code highlighting, code formatting and the use of comments.

Errors are pointed out with “squiggles” and you have the ability to save incomplete or incorrect measures.

You can find an overview of all changes in the tip Enhancements for the DAX language in Analysis Services 2016.

There also have been some improvements in the use of DAX by client tools, such as Power BI. This is done by reducing the number of queries between the client tool and the server, by creating one single “super DAX” query instead of multiple queries. Furthermore, measure execution has been streamlined to optimize performance. One example not mentioned in the tip above is a countrows optimization, by using table heuristics.

A new compatibility level has been introduced for Tabular: 1200. You can choose the level when creating a new Tabular project. 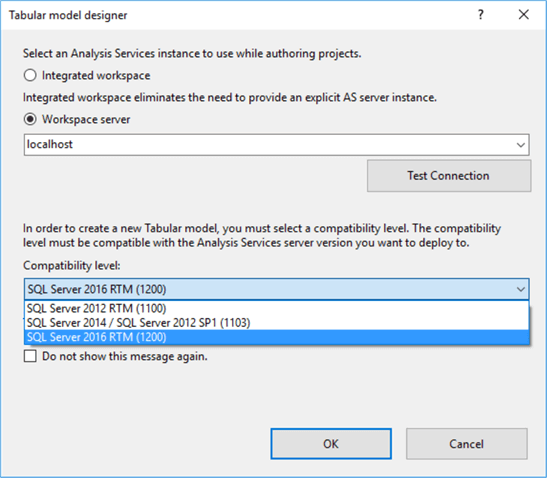 What’s remarkable about this compatibility level is that SSAS Tabular has moved away from XMLA and uses JSON instead. One immediate advantage is that modeling performance has much improved compared with the previous levels. The latest versions of SQL Server Management Studio (SSMS) can work with the new 1200 level. SSMS supports scripting the Tabular model for the commands Create, Alter, Delete, Backup, Restore, Attach and Detach. The output is Tabular Model Scripting Language (TMSL) which is in JSON. Here you can see an example for tacking a backup of a model (note that SSSM still calls this an XMLA query, even though it’s JSON): 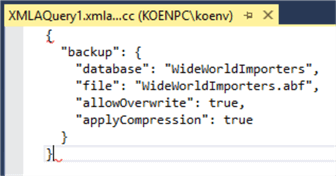 Of course, changing to JSON has an impact at various places:

Keep in mind there’s no option available to translate the actual data, like in SSAS Multidimensional. You can find more information about translations in the tip Multi-language support for SSAS Tabular Models.

There are several significant enhancements to the DirectQuery engine for the 1200 models: