A Key Performance Indicator aka KPI is a value which will determine how well an organization is achieving its objectives. Organizations use KPIs at multiple levels to estimate their success at reaching objectives. Therefore, KPIs are a handy option in the data warehouse which can be used by people who make strategic decisions, because a KPI can be used across various dimensions and hierarchies.

A KPI has four important properties which are value, goal, status and trend. Let's explain this by means of Profit Margin with the below calculation.

Logic for the above is implemented via Multi-Dimensional queries or MDX queries.

Let's quickly implement a SQL Server Analysis Services (SSAS) cube for demonstration purposes. Please note that detail descriptions for building a SSAS cube will not be covered here it is not the scope of this article.  Please reference this tutorial. 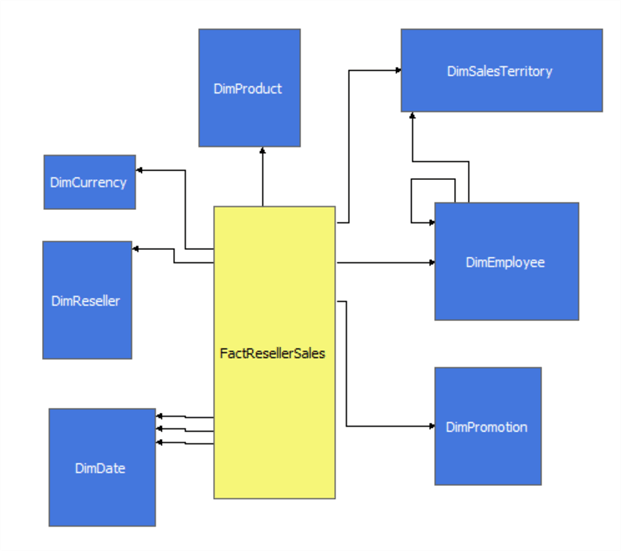 All the standard attributes were added including hierarchies for the date dimension as shown below.

The next step is to add a calculated value called Profit Margin to the cube from the calculation menu option in the cube as shown below. 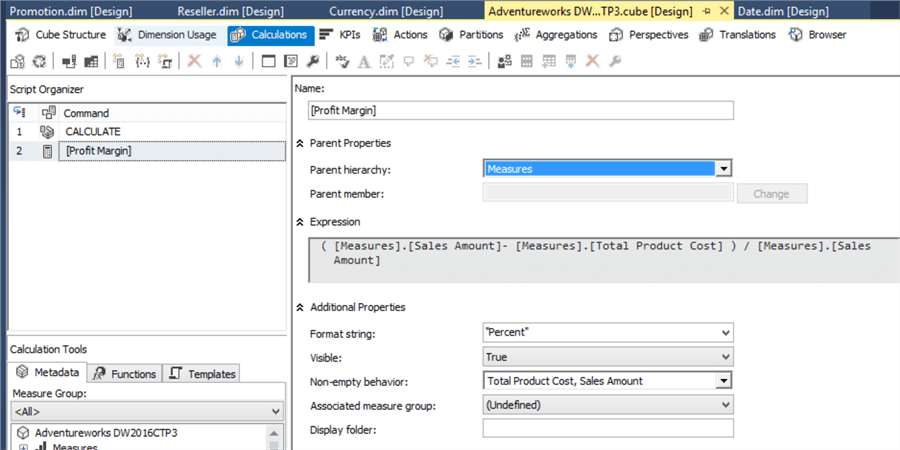 In this configuration, the expression is written and visible is set to True. If you are creating calculated columns only for a KPI, you can set this to False. By doing so, end users will not see this measure, but will be able to use it for KPIs.

Also, make sure that you are selecting all the base measures which are involved in the expression in the Non-empty behavior dropdown.

Now everything is set to create KPIs. 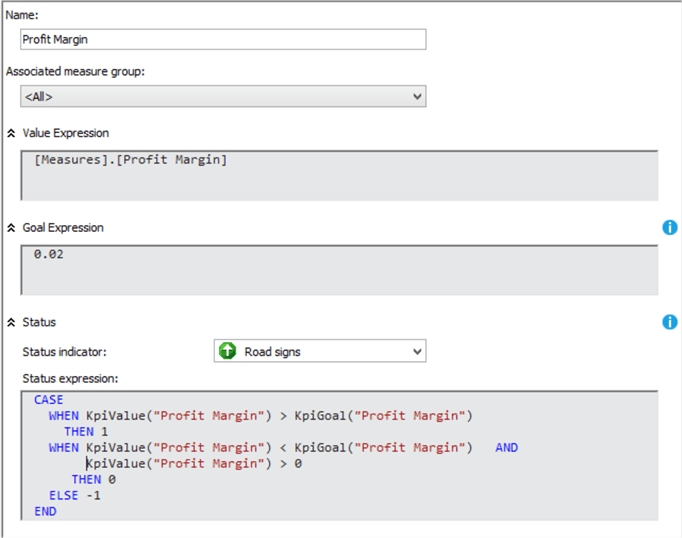 The KPI is named Profit Margin.KPI value is set as Profit Margin measure which we defined before. KPI goal is set as 0.02 or 20%. As said before, the goal can be a more complex configuration than this. The KPI goal will be modified later in order to demonstrate the complex nature of the goal other than just a number.

Status is the important parameter which will be displayed to the end user. Following is the MDX code used to define the KPI status.

KPI status has three statuses which are -1, 0, 1. So a KPI status should define the condition which will match -1, 0 and 1 so that each indicator will be matched with the relative status. In the above code, two KPIs have been used. KPIVALUE and KPIGOAL will return the value and goal of the KPI passed as a parameter. In the above example, it will return KPI value and KPI goal of Profit Margin. Though this KPI has a very simple value and goal, in the case of complex values and goals, there is no need to repeat them with the use of these KPI functions. Also, there is a provision to pass the different KPI names as a parameter, values, and goal of another KPI to combine the values.

There are few additional optional properties as shown below. 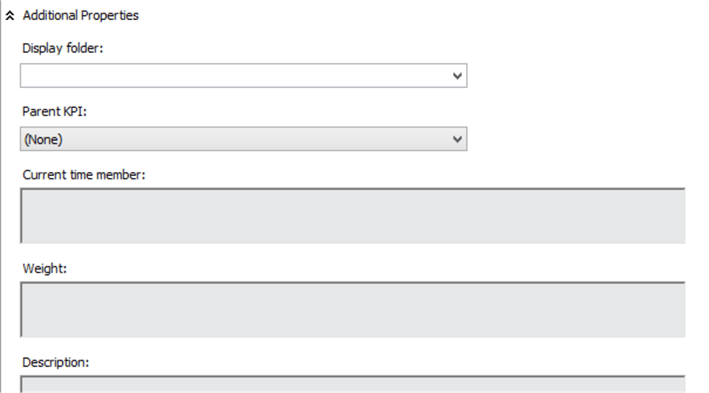 Typically, non-technical users will use Excel to connect to the SSAS cubes and to verify the created KPI. When connected to the cube via Excel, the end-user will see all the KPIs and properties in the PivotTable Fields as shown below. 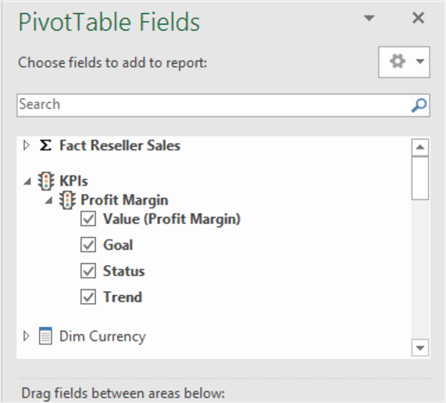 Drill down analysis is another important set of functionally in cube data analysis. The following Excel sheet shows that KPIs can be combined with other measures in the cube.

Also, this KPI can be used in tabular as shown in the below figure. In this analysis, Product Color is used in the header.

Similarly, this KPIs can be used as a dashboard as shown in the below figure.

In the previous example, we have used a simple calculation for the KPI goal. However, the goal can be somewhat more complicated as shown below.

This goal calculation says if the sales territory is Europe the goal should be 1%, for North America it should be 0.75% and for all other territories it should be 2%.

In the industry, there are standard KPIs such as Customer Profitability, Labor Turnover, Absenteeism, etc. Since these are industry standards, SSAS KPI provides various templates so that end users can easily select them for use. 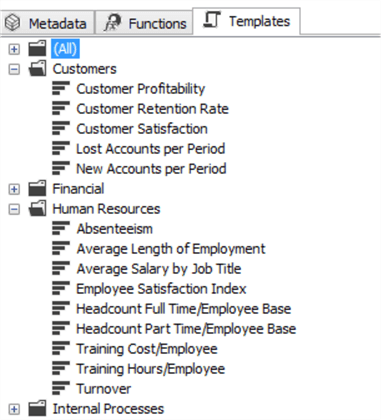 Following is the template for Absenteeism. 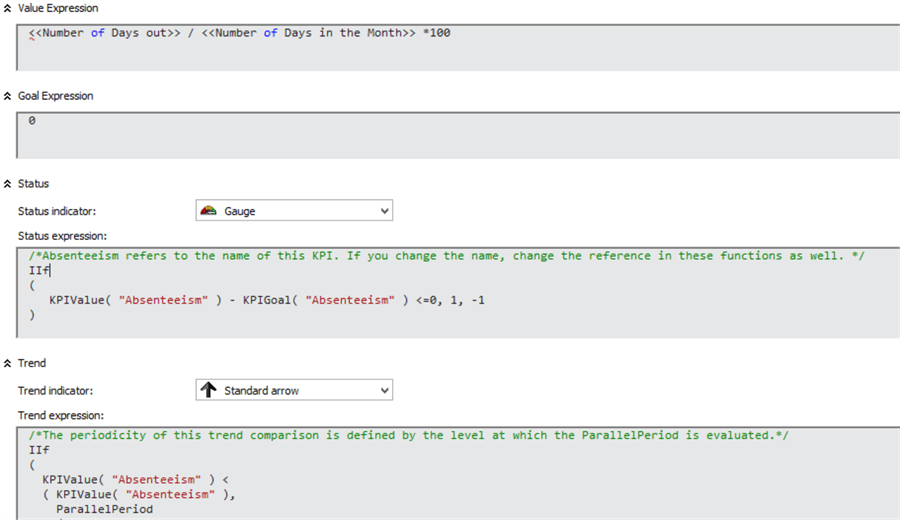 As shown in the above figure, it's just a matter of changing the KPI value and the KPI goal and the KPI is ready for use.

KPIs can be used for faster analysis in SSAS multi-dimensional cubes. SSAS provides a much easier way to configure KPIs and use them. By using the existing templates, users can implement standard KPIs for their industry.