Do Not Keep Your SQL Server Databases on a System Drive

If you are a SQL Server developer who thinks about the time a query is going to take to perform its work, then you know the fewer IOPS, the better the execution time. As for me, I learned this hard way. Once I developed a query that ran really fast when I was developing the query. I went home and was very happy with my work and slept well. The next morning I decided to show my work to my manager and it appeared the query worked slower than earlier. I did not change anything and all seemed to be working as normal, but something screwed up my presentation and it didn't run as fast as before.

I found the reason very quickly by pressing Ctrl+Shift+Esc and reviewing the Performance tab of Task Manager as shown below: 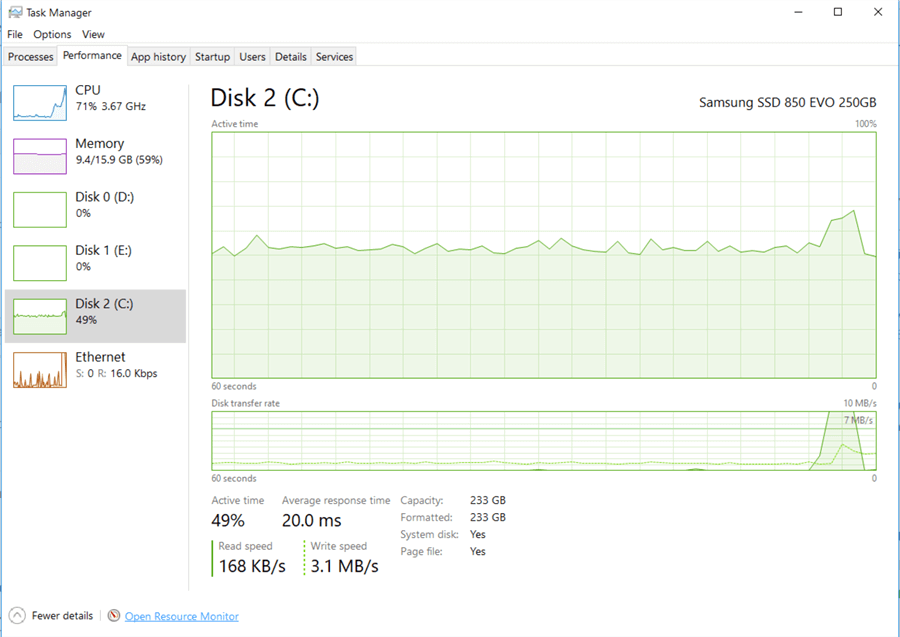 Figure 1 shows that my C drive was very busy, but which program is causing the IOs? To understand, I had to click on the link showing “Open Resource Monitor”. I then looked at the values in columns “Read (B/sec)” and “Write (B/sec)”. I checked the processes which had the biggest values in these columns. Below you can see what I saw. 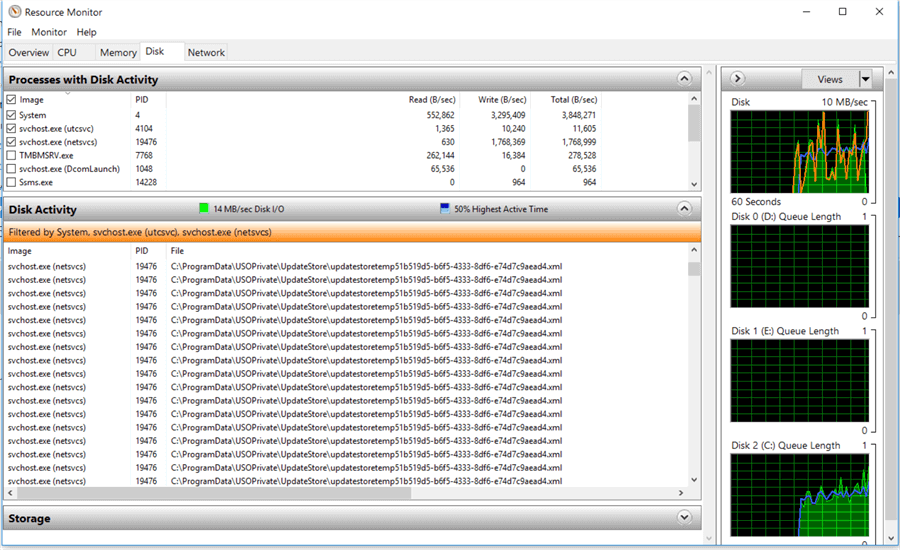 There were a bunch of processes with USOPrivate.  I Googled the keyword “USOPrivate” and the first link I found indicated the process is related to Windows Update.  So this was causing all of the disk activity.  I wanted to check to see if my development database was on the same busy disk, so I executed the following script to find the location of the database files on disk.

This script returned two rows as expected, which are shown below.

So, my database was on the C disk and this is my system drive. I realized that this was why sometimes my time measurements could be different, because my drive is a shared resource. After the Windows Update completed my second presentation went well.

To confirm this problem, this tip needs some real evidence and some metrics to prove the point related to not putting your databases on the system drive.  To be honest it is quite difficult to duplicate the Windows Update process, so I decided to reproduce a workload that a potential program can perform.

I want to show what happens when a disk where your database lives is busy. I will do that in two experiments. The first one is obvious and I intend to demonstrate the effect that may occur at any point in time. The second one will be more close to reality and I will show how it could happen.

I created a database with the following script:

We can see that my database lives on disk E, we can confirm this with the following script:

The result is presented in the picture below.

Now we can be sure that the experimental database lives on drive E.

At work I have been working on a task named “Security & Search Index” (I am going to write about this cool asynchronous solution in the future) and I have to say that the difference I noticed, when my disk was busy, was very little i.e. 10 milliseconds slower, but this can add up over time.

As I cannot repeat the exact workload of Windows Update, I will show you a situation when my disk is really busy. Also, my T-SQL will be as simple as possible for this example.

Let’s have a look at what we did.

Listing 5 - Count of rows in the experimental table

And the results is:

Second, let’s write a simple query which returns a SUM from the OrderAmount table.

Figure 6 - Sum of all orders

Listing 6 - Count of pages to be read from disk

The result of IO statistics are:

Next, let’s get how long this takes to run.

As you can see, I did not use SET STATISTICS TIME. I used some SQL code to show the duration, since this is easier to read.

Below you can see the query results: 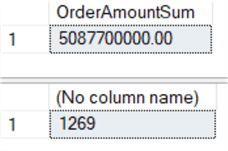 Figure 7 - General time spent to return sum by all orders

As you can see SQL Server took around 1.2 seconds to return the result.

But what happens when another program is using the same disk? To get the answer, I developed a very simple program which constantly copies a 1GB file. I called it MakeDiskBusy.exe. When I run this program from my E disk I can see the following metrics. 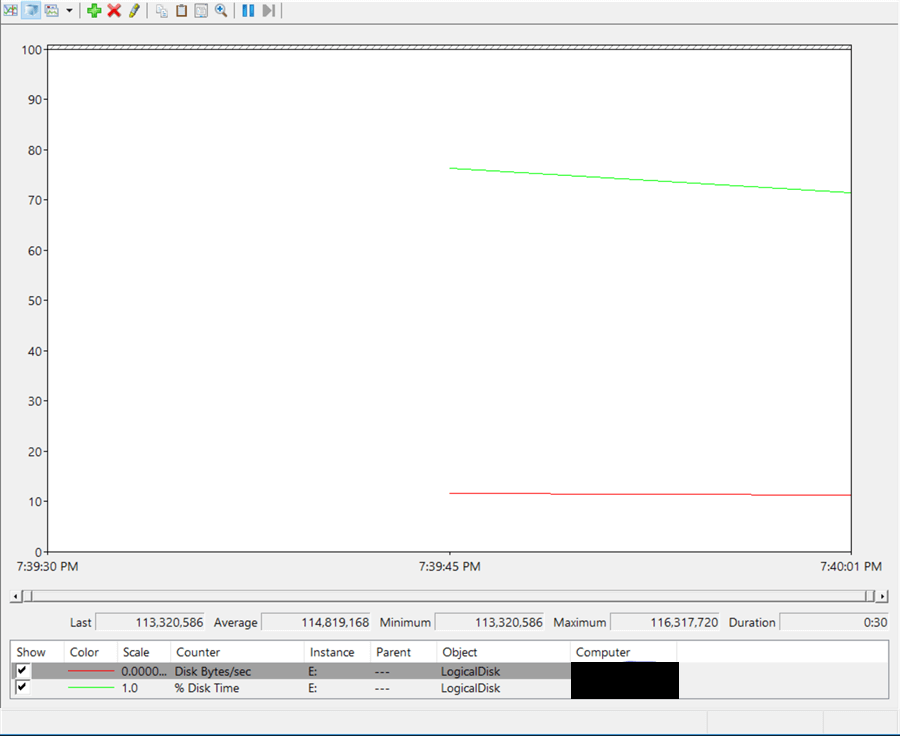 Now I want to execute my query again while my disk is busy. Here are the results from running the code in Listing 7 again.

Figure 9 - Execution time while the disk is busy

The execution time is slower this time. This shows that if there are multiple IO requests for a single disk both requests will be slower. That means if the disk is serving one request, the other is waiting.

Now I want to modify the MakeDiskBusy program and make it more similar (from my point of view) to Windows Update. Let’s say it will do something periodically. For example, 3 threads will copy a 100 MB file once every 3 seconds. It will do that for 5 minutes. While this is running, I will execute my SQL query from Listing 7 and log the execution time to a table. Once my experiment is done I will create two charts showing execution duration and disk counters from Perfmon.

Okay, my experiment is done and here are the charts.

The chart above (Figure 10) shows the more work the disk is doing, the longer the execution duration. The spike you can see within time period 06:00 till 11:22 is made by the MakeDiskBusy program.

Below I want to show the disk chart. 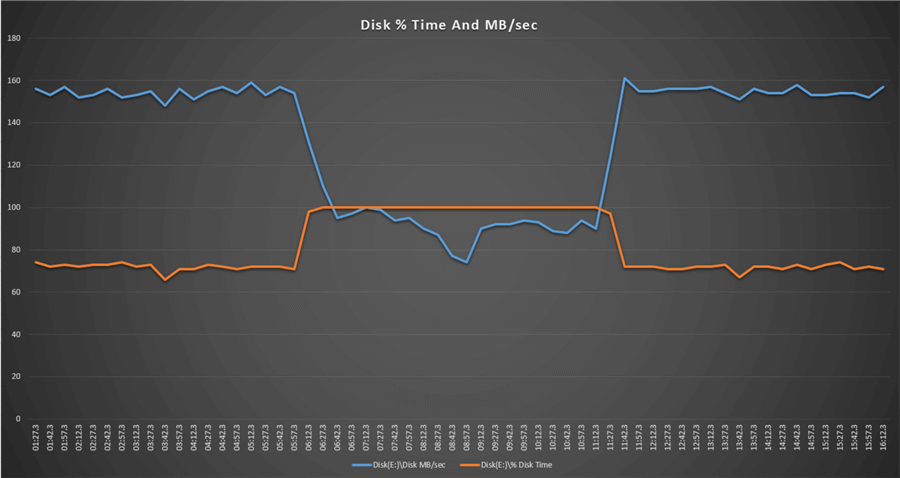 So based on my experiments, please do not keep your database on a drive that could be used by some program other than Microsoft SQL Server. Moreover, keep an eye on other system resources like CPU, Network and Memory. If you work on optimization issues be sure that your environment is not affected by some unexpected software.

Viacheslav Maliutin is a SQL Server Professional with 16+ years of experience in reporting, integration and more.