Microsoft SQL Server does not allow for you to restore individual tables from a backup file, but there are times when you want to refresh a subset of tables, say inside of a data warehouse that has hundreds of tables. Restoring a 1TB data warehouse to refresh a few tables is inefficient, so we will show a more efficient method in this tip.

The BACPAC (and DACPAC) functionality inside of SSMS leverage the SqlPackage.exe executable that comes installed with SQL Server. The executable can be found in the installation directory, similar to the following: [install dir]\Microsoft SQL Server\140\DAC\bin. Here is the documentation on the parameters available for SqlPackage.exe. Using that document as a guide we can create an automated export and import process.

Let’s try this with one table from the AdventureWorks2014 database. We are going to create a BACPAC file by exporting the data from the HumanResources.Employee table:

We are able to connect, and the process starts, but we see an error message:

And thus, we see the real issue with trying to restore a subset of tables inside a relational database. When faced with this issue the traditional method is to manually remove the relations, migrate the data, and restore the relations after the migration is complete. However, with BACPAC, we can migrate the group of tables together.

Let’s take a look at how that can be done using the SqlPackage.exe executable. We will export tables from the HumanResources schema along with two tables in the Person schema. My command line now looks like this:

And we can run this without error: 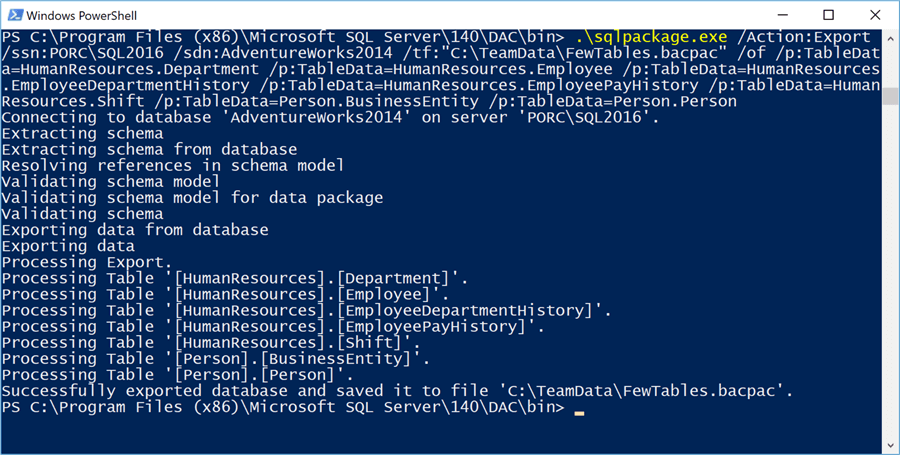 The BACPAC file has been created.

To import the data we can use the SqlPackage.exe executable with different options, but with an import caveat: we must import into a new database. We are not allowed to import into an existing database. This behavior is not different than importing from a BACPAC through SSMS, you must specify a new database name.

The result will be a new database that has an identical schema to the original, but only a subset of the data: 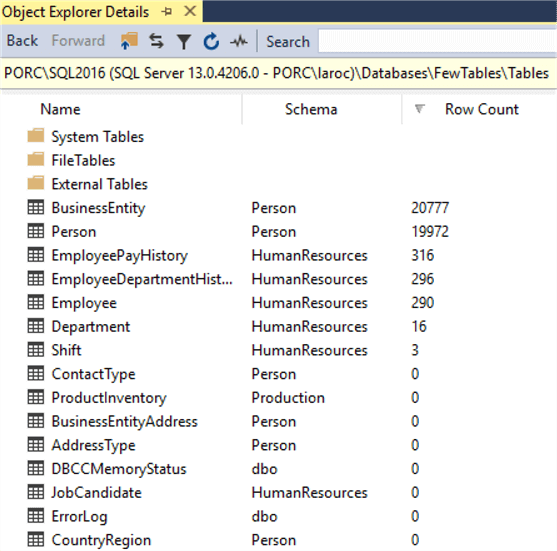 Now, let’s put this together inside a job in SQL Agent.

We can put our code into one (or more) job inside of SQL Server Agent and automate this process for recovering a subset of tables. The process outline looks like this:

We will create one job, with three steps.

The first step can be accomplished with two lines inside a PowerShell script. The first line will change the working directory to where the SqlPackage.exe file resides, and then we will run the executable:

You could put this all on one line if you wish. Or make it dynamic to locate the install directory for your instance. Whatever works for you and your needs. Here’s what the step looks like inside the job I created: 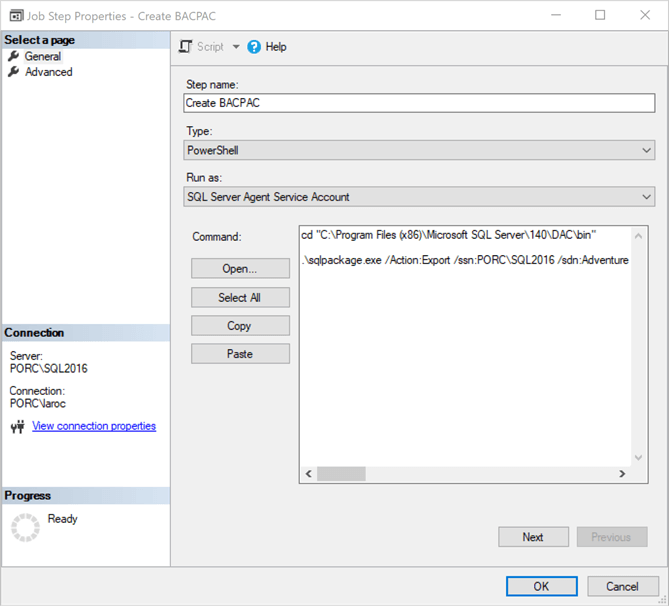 The second step is one line of T-SQL:

The third step is to do the import:

This is what the job looks like when configured: 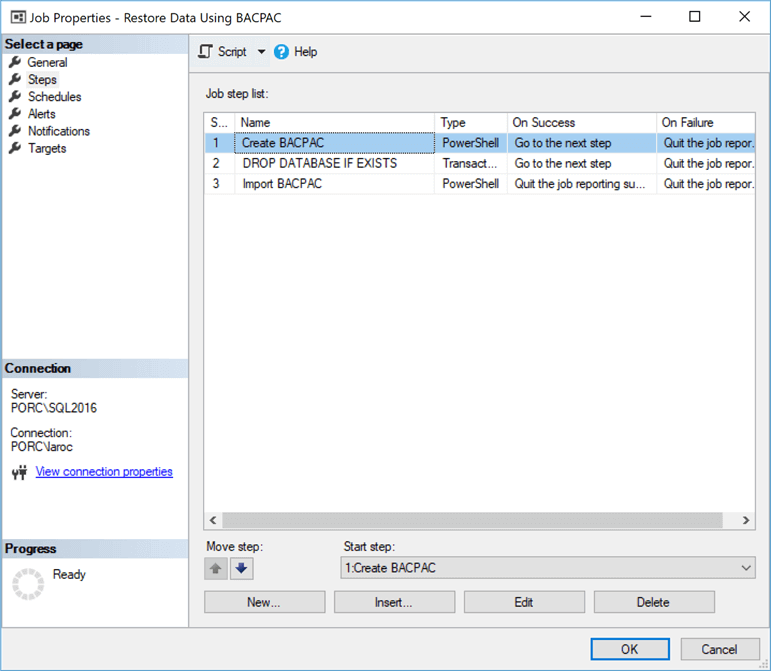 Migrating the data back into the original database can be tricky. You may find that you need to do extra steps (dropping foreign key constraints, then adding them back after the data is migrated) because relations exist between tables. Other things like identity values and indexes can cause you a headache as well. Fortunately, we have more than a handful of options to migrate data between databases.

You could use the SQL Server Import/Export Wizard to move the data. The wizard allows for you to save as an SSIS package, allowing for you to schedule the data migration as part of the process we built above. This might be the best option for most databases.

Another option would be for you to manually create some INSERT statements. This would also allow for you to easily add everything into a job inside of SQL Agent. But you will also need to script out the dropping and creation of constraints, indexes, etc. as well. Sometimes it is easiest to drop the target tables, recreate them, migrate the data, then add indexes and constraints at the end.

Depending on the location of the data, and size, you may want to use BCP or BULK INSERT. Using the one weird trick as I have explained on my blog you could crack open the BACPAC file by renaming it to a *.zip file, expose the table data, and BCP right into the target database. Of course, you would still need to take care of relations, constraints, and indexes, same as doing INSERT statements.

Lastly, I don’t need to remind you about the importance of having database backups, but I will anyway. You should make certain you have backups of your databases before you start migrating data around. You have been reminded.