As a database developer I would like my development team to overcome the shortcomings of conventional database development with a better approach that not only helps us with early bug detection and designing requirements focused on the solution, but also speeds up database delivery cycles.

Before moving on to the implementation of TDD let's understand these approaches.

What is Conventional Database Development

Conceptually speaking conventional database development in the context of unit-testing consists of the following steps:

This can be illustrated by the following diagram: 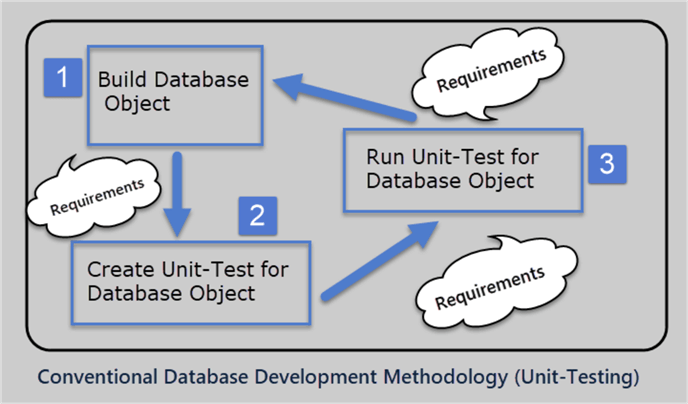 The best implementation of traditional database development methodology is if unit-level requirements can be defined inside the database objects themselves, according to a SQL expert.

Test-Driven Development methodology uses tests rather than objects to meet the requirements which means we write tests, in our case, database unit-tests to check if a particular user requirement at the unit-level is met by the object under test.

TDD consists of the following steps:

So, each unit-test initiates the development which is purely focused on meeting the requirements without the need to worry about adding any extra functionality. 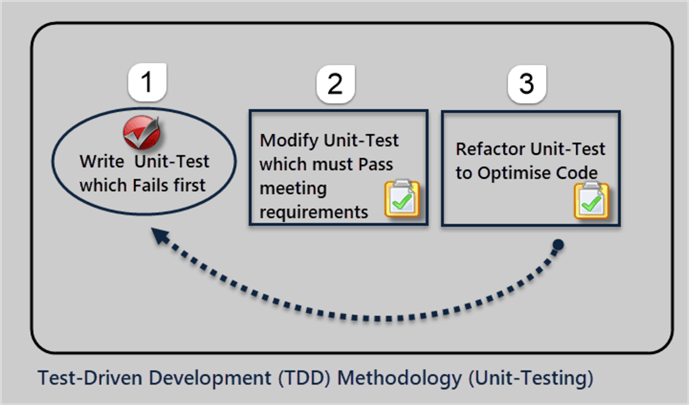 Consider your development team already has a database which contains objects as a result of previously received requirements, but you have observed that the current approach is not helping your team in early bug detection and customer focused development.  Rather, more time is spent on adding unnecessary extra functionality and resolving issues becoming Production issues.

Now, you have received new business requirements and this time you have decided to implement test-driven development to get your team focused on meeting requirements only and see if early bugs can be detected rather than leaving them to become Production issues.

We will use OfficeSuppliesSampleV2 database (for demonstration purposes) which contains the following database objects:

Apart from the above four objects (tables) there is a procedure to add a customer and view to see the orders.

Please download and run the scripts in the link below to create and populate OfficeSuppliesSampleV2 database:

Since modern database tools (SSDT - SQL Server Data Tools) are in use by development teams, the OfficeSuppliesSampleV2 database mentioned above is implemented in the form OfficeSuppliesSampleV2 Database Project to mimic a main transactional database which contains a simple version of customer-order-product scenario with the type of orders for office supplies.

In order to implement Test-Driven Development with SSDT we have to create a database project (mimicking a transactional database) and test project (to test database objects).

So we are looking to have the following database projects up and running:

Please refer to my previous tip about implementing tSQLt using SSDT to run through all the steps required to create a database project and a test project. 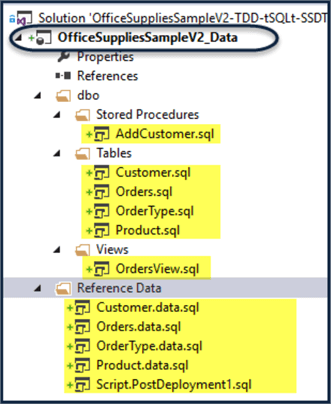 Now create the OfficeSuppliesV2_Tests database project and add the tSQLt Database Unit-Testing Framework to it by referencing my previous tip.

The summary of the steps is as follows:

These steps are mentioned in detail in my previous tip.

As a result of following above steps, our test project is now ready as shown below: 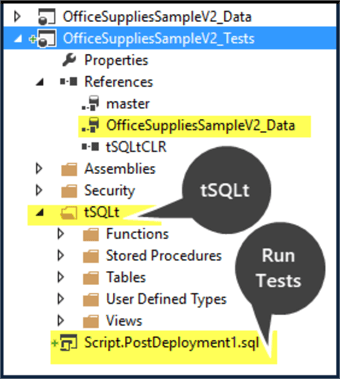 Before we do a test run we have to ensure (as already mentioned) that the Target Platform for the test project is the same as the main project and the debug database has been configured successfully to point to the desired SQL instance and the following options are selected: 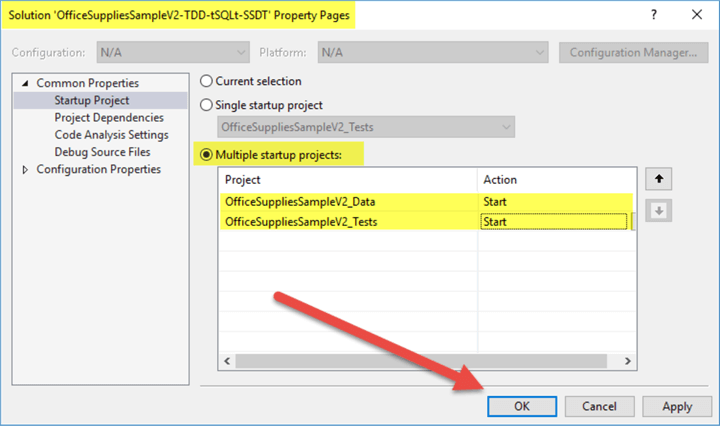 Now debugging of the test project (OfficeSuppliesSampleV2_Tests) should run the tSQLt tests:

Now the database project and test project have been setup successfully and we have replicated the scenario where the database already contains objects, so, it is time to begin the test-driven development to satisfy the requirements mentioned before.

You have received the following business requirements:

Pick an object such as OrderTypesReport

After receiving the business requirements, the first thing that comes to mind is to map these requirements to a single object (if possible) which we think should be able to meet the new requirements.

We have picked OrderTypesReport database object which is going to meet the new requirements.

At this point it does not matter whether the desired object (OrderTypesReport) is going to be a View or Stored Procedure and also it is not necessarily a report (object), but has the capability to become a report (object). 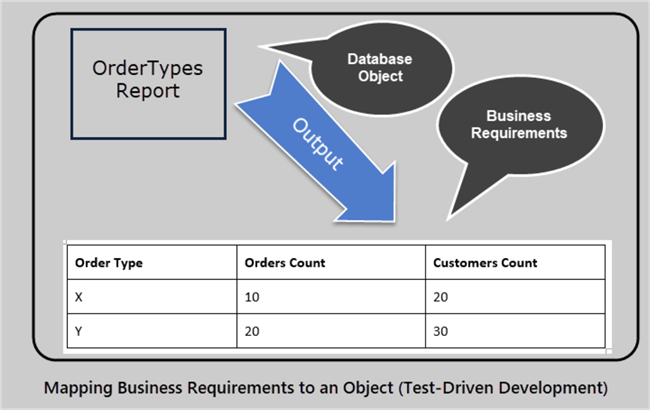 The first step in TDD using tSQLt is to create a test class where we can group all our related unit-tests.

According to Dave Green if you name your test class (schema) same as the name of the object under test, this makes unit-tests easier to manage. We are following the same rule as suggested by Dave Green who is an expert in this field.

So, we create a new folder OrderTypesReportTests and then create schema OrderTypesTests as follows: 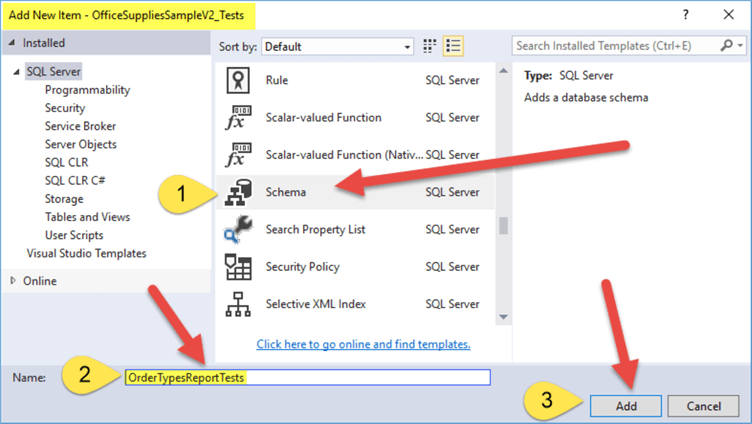 Then writing the following code:

TDD Begins by Creating a Test rather than Object

The test-driven development (TDD) begins by creating a unit-test to check if the object which is responsible to meet the requirements exists or not and we know at this point it does not exist, so we expect the test to fail first.

Therefore, TDD begins by creating a unit-test to check if the object exists rather than first creating the object and then creating a test.

The benefit of this approach is that it is a purely test-driven approach, so it is initially the test rather than the object that ensures the business requirements.

Create a unit-test by creating a new stored procedure under OrderTypesReportTests schema by adding a Stored Procedure as follows: 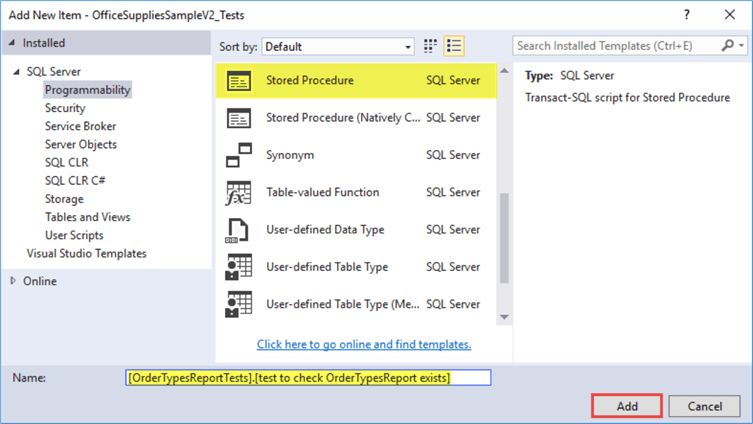 Press F5 to start debugging and the test results should fail as shown below:

Now create OrderTypesReport object as a view in the database project, but as a stub (placeholder) without the desired output since the purpose here is to create objects first (keeping the output in mind) as follows: 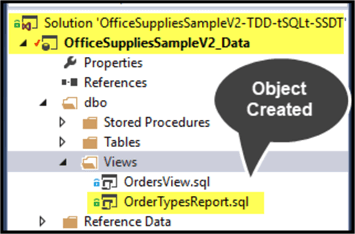 Now re-run the unit-test (by pressing F5) and it should be successful:

Next we are going to create a unit-test to check OrderTypesReport outputs correct data which we are calling desired data. This can be achieved by first focusing on the requirements below:

According to Dave Green as a standard practice the unit-test should not rely on the following:

We have to isolate the unit-test from both data and the physical tables of the database under test so that unit-test should not depend on the data present in the database and does not need to be concerned about constraints and dependencies of the table(s) under test.

The solution is to use tSQLt Fake Tables (which are true copies of original tables with no constraints) and embed realistic data inside the unit-test.

Let's begin by creating a unit-test (stored procedure) as follows: 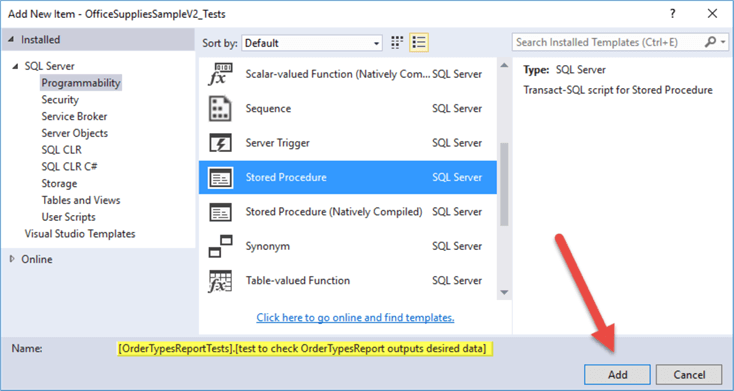 Now run the unit-test by debugging the test project and expect the results to fail first:

Update OrderTypesReport view for the Unit-Test to Pass

Next modify OrderTypesReport view’s script to get the desired output, so the unit-test meets the desired requirements and can pass.

Now update the view based on above script excluding the Order By clause which is not allowed in view(s):

Please note that SSDT supports declarative database development, we simply declare what we need rather than how we need, so updating the view is not required since replacing the existing view would suffice here.

While OfficeSuppliesSampleV2_Data project is selected press F5 to deploy the new changes successfully to the debug database.

Now re-run the unit-test to see it pass this time:

Your Test-Driven Development has been implemented successfully and your development team is only concerned with writing unit-test(s) which meet requirements, but obviously a unit-test which checks if a requirement is met must first check (in another unit-test) whether the object which meets the requirements exists or not.

So, it is very unlikely that a unit-test to validate requirements is skipped in a fully functional test-driven development and also adding new requirements should not conflict with existing requirements which can also be easily tested by running all the unit-tests. It is also easy to detect bugs earlier by simply running the unit-tests. There are other benefits of this approach such as not having to write extra code and teams are focused on meeting business requirements.