You probably have heard recently about two different vulnerabilities on processors called Meltdown and Spectre that allows hackers to access the memory space of every process on any operating system. Being aware of that, you may be asking yourself a lot of questions. Just to mention a few: What are those vulnerabilities? Are my SQL Server instances affected? How can I solve this? Is there a patch? What are the effects of these vulnerabilities and their respective patches on SQL Server performance? Should I patch my systems?

This tip is aimed to give you the tools so you can answer those questions and decide what is best for your environment.

Recently we were aware of two major vulnerabilities discovered by Google’s Project Zero Team that were named Meltdown and Spectre. At first the notice created some fear, which was increased when media published that Intel's CEO, Brian Krzanich, sold a significant position of his Intel shares prior to making public the issue of these vulnerabilities (Intel CEO’s Stock Sales May Warrant SEC Examination, Bernstein Says Optics on Intel CEO Stock Sale Are `Indefensible' ).

Due to those facts, the situation looked worse than it was, but as time passed and patches came to light our uncertainty settled a little and allowed us to think and recap on this matter.

What is a Side Channel Attack?

By definition, a Side Channel Attack is any attack based on information gained from the physical implementation of a computer system, rather than weaknesses in the implemented algorithm itself. In other words, these types of vulnerabilities are hardware dependent. That makes the fix process more arduous and complicated, because the underlying problem is not (in this case) in the SQL Server code per se.

Meltdown and Spectre are a class of Side Channel Attacks that rely on what is known as Speculative Execution and Out of Order Execution. This is a kind of optimization on which the CPU performs a task without knowing if that task will be needed. Modern CPUs in order to save execution time on conditional branches, execute both branches in advance meanwhile waiting for the result of the condition that will signal which of the branches is the right one to follow and which must be discarded.

I created the following image to show you how Out of Order Execution works. There is a control thread that has two branches. Each branch is executed by an Execution Unit. This happens internally in the processor, in other words this is something that happens without the programmer being aware. Then the thread decides which branch is the right one to follow. 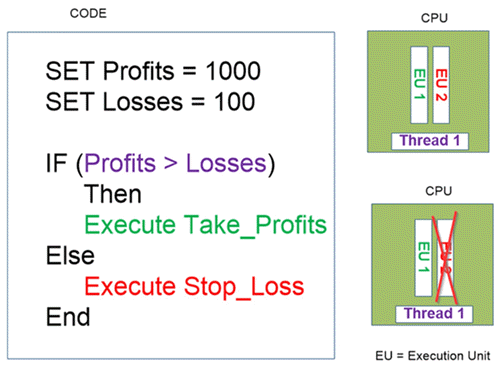 This is the most compromising vulnerability because it exploits a bug in the design of Intel microprocessors. It allows a potential attacker to read the whole physical memory from a user process. Processors have levels of privilege often called Protection Rings that serve to separate the level of access to the system resources. Operating systems like Windows and Linux use these protection rings to separate the kernel space and the user space.

In order to protect your system from Meltdown you will need to apply a firmware or microcode update, remember that this is hardware related vulnerability. If you have a Linux system you can apply a microcode update by downloading the files from Intel https://downloadcenter.intel.com/download/27337/Linux-Processor-Microcode-Data-File?product=873 or by running the following:

If your system is Windows you should apply Microsoft patches. This will update your CPU microcode to the right level according to your processor.

The Spectre vulnerability does not allow the user mode processes to read kernel memory like what happens with Meltdown. But Spectre allows the code running on a user process to access data when it shouldn't. In layman’s terms, on a user process a thread can access the data of all its other threads. The easiest example is a web browser: You can have a few tabs opened, when each tab has its own thread, and a new tab that loads a bogus web page is able to access the data of the other tabs.

Spectre is not hardware related, so each application provider must provide their own patch for the application. Microsoft released Spectre patches for SQL Server. Also Microsoft released an update for Visual Studio and its compiler (https://blogs.msdn.microsoft.com/vcblog/2018/01/15/spectre-mitigations-in-msvc/) so software providers can recompile their applications and redistribute the patched binaries.

Microsoft has launched patches for SQL Server for versions 2008 and above.

Let’s think about this. If these vulnerabilities exploit optimization methods known as Speculative Execution and Out of Order Execution, what can we infer about this? The answer is easy: We must disable those optimizations. In other words, by disabling those optimizations we are making something that may (and it does) reduce the system performance. So the question is not if we will suffer lack of performance, but how much performance we will lose.

At the time I was writing this tip, a new piece of news emerged about Microsoft issuing an update to disable Intel’s patch for Spectre (https://www.cnbc.com/2018/01/29/microsoft-issues-update-to-disable-intels-buggy-spectre-patch.html) because sudden system reboots were reported.

Microsoft released a patch for the C++ compiler on Visual Studio 2017 version 15.5 that introduces the /Qspectre switch which is equivalent to the undocumented /d2guardspecload switch to disable speculative execution (https://blogs.msdn.microsoft.com/vcblog/2018/01/15/spectre-mitigations-in-msvc/). If you read the previous link you will find that Microsoft said this patch has a minimum impact on performance. Textually they said “Performance gains from speculative execution are lost where the mitigation is applied but the mitigation was needed in a relatively small number of instances across the large codebases that we recompiled. Codebases vary greatly so we advise all developers to evaluate the impact of /Qspectre in the context of their applications and workloads”.

But on the next screen capture of the previous link you will see that the resulting assembler code when compiling with /Qspectre has an extra instruction named LFENCE (short for Load Fence).

It is trivial that when a program adds an extra instruction then it should take longer to complete. That is without even considering that the extra instruction disables out-of-order execution which is a performance optimization technique.

What do we do?