How to Save Costs on Non-Production SQL Server RDS Instances

We are trying to streamline our AWS resource expenses. The DBA team says we are running a number of RDS servers in our AWS accounts. Right now, we need those instances, so we can’t delete them. Is there any way we can save costs of those instances? Are there any quick wins we can have?

Amazon Relational Database Service (RDS) is a managed database service from Amazon Web Service. It offers a number of database platforms including Oracle, MySQL, PostgreSQL, MariaDB and Microsoft SQL Server. RDS has been widely adopted in the AWS community. Companies love RDS for its ease of deployment, high ROI and simple maintenance. With RDS, much of the overhead of building and maintaining a database infrastructure is gone.

However, RDS can also incur a large cost if not used properly. Companies with large database fleets in RDS can soon find their AWS monthly bill mostly consumed by the database service. Previously there wasn’t much anyone could do: non-essential RDS instances couldn’t be switched off after business hours like their EC2 counterparts. You could switch off a development EC2 server after 6:00 PM and turn it back on at 7:00 AM - this was not the case for RDS.

Fortunately, AWS now allows RDS instances to be shut down and restarted when necessary. This has been a much-awaited feature for RDS customers and no doubt will be embraced very quickly.

In this article, we will see how to shut down and restart RDS instances manually and how to automate the process.  We will talk about the caveats of this feature and also some other methods you can consider when streamlining RDS costs. 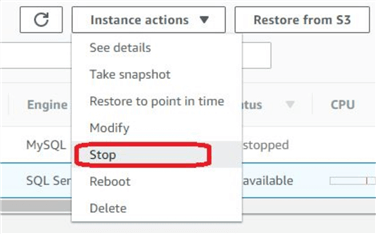 When shutting down an instance, RDS offers an option to make a snapshot of the instance. In our opinion, it’s always best to do this. 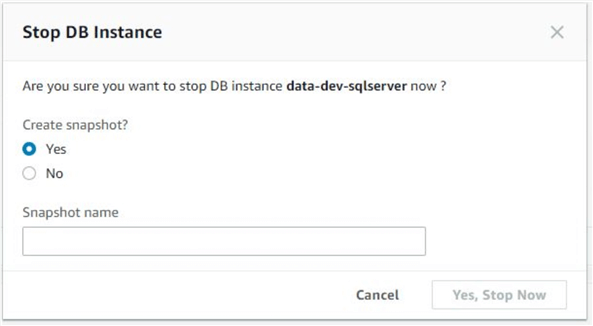 Similarly, we can start a stopped RDS instance by selecting the instance from the RDS console and choosing “Instance actions > Start” from the menu. 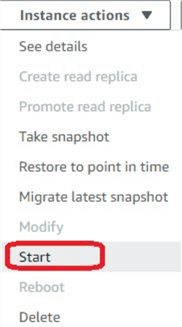 As you can imagine, this process is perfect for saving costs on non-production database servers. With this method, DEV or TEST instances can be shut down after business hours and started just before start of business. If an organization has a large number of non-production RDS instances, this can be a significant cost-saver.

Like all good things, this feature comes with a price. As of this writing, an RDS instance can’t be shut down

Most RDS production environments should have a multi-AZ setup for failover purposes. This may not allow TEST or STAGING environments being shut down or restarted, because typically these environments are similar to PROD. Even if the systems are not needed after hours or after certain projects have gone live, they still can’t be stopped.

However, if there are simple development systems that don’t have read-replicas or don’t participate in multi-AZ, shutting those down during non-essential hours will be a wise idea.

Automating the Stop and Restart Process

Stopping and starting RDS instances is simple when done from the console, but most DBAs and system administrators would want to put some sort of automation around this. This is where a little bit of scripting with AWS CLI can come handy.

The stop-db-instance command takes the name of an RDS instance as a mandatory parameter. There is also an optional parameter, db-snapshot-identifier. With this parameter, you can tell RDS to create a snapshot before the instance is shut down.

The start-db-instance command will take the name of a DB instance as the only mandatory parameter.

If we try to shut down an instance that’s already stopped or in the process of stopping, we will receive an error message like this:

An error occurred (InvalidDBInstanceState) when calling the StopDBInstance operation: Instance <instance name> is not in available state.

Similarly, if we try to start a running instance, the error message will be like this:

An error occurred (InvalidDBInstanceState) when calling the StartDBInstance operation: Instance <instance name> is not stopped, cannot be started.

None of these commands are synchronous: this means the CLI only issues the command and outputs the response it receives from RDS. It doesn’t check if the shut down or start up is actually is proceeding or what stage the instance is in. We can parse the JSON document’ DBInstanceStatus field to find the status.

The code snippets below show two very simple bash scripts: one for stopping an instance (stop_rds.sh), the other for starting it (start_rds.sh). In both the scripts, we are taking a comma separated list of instance names as parameter. Note how we are creating instance snapshots with date and timestamp before stopping it. You can schedule both these scripts from cron jobs or scheduled tasks from a Jenkins server. One job can be schedule to run at say, 7:00 PM and the other at 7:00 AM.

The following command calls the script with two RDS instance names as parameters:

The following command calls the script with two RDS instance names as parameters:

There are few points to be mindful of when running the automated process:

Stop and start is a quick win for saving RDS costs. Other methods we can consider include: