We have a large number of data files stored in Amazon S3 that we would like to import into an RDS SQL Server database. We know we can use ETL tools for this, but is there any way to import this data without ETL?

Amazon Web Service (AWS) recently announced a new feature of its Relational Database Service (RDS) for SQL Server. This feature allows a native integration between Amazon RDS SQL Server and Amazon S3. With this integration, it's now possible to import files from an Amazon S3 bucket into a local folder of the RDS instance. Similarly, files from that folder can be exported to S3. The RDS local folder path is D:\S3\.

This integration is a great way to import data into RDS SQL Server databases without using an ETL tool. S3 data files downloaded to the local drive can be easily ingested using the BULK INSERT command.

In this article, we will see how to prepare an RDS SQL Server for native S3 integration. Although the feature is available for both single-AZ and multi-AZ scenarios, we will use a single-AZ RDS instance. We will copy some sample data files from an S3 bucket to the RDS instance and then ingest that data into a database.

The data files for the examples in this article are from the City of Los Angeles Open Data Portal. There are many publicly available datasets on this site, some of which are from the Los Angeles Police Department (LAPD). One such dataset is the yearly LAPD Calls for Service. These datasets contain anonymized details of service requests made to the LAPD each year. The files are in CSV format and have header rows.

The image below shows a sample of the data:

As you can see, there are seven columns in each dataset which are more-or-less self-explanatory:

We have copied the files under a folder called "data" in an S3 bucket: 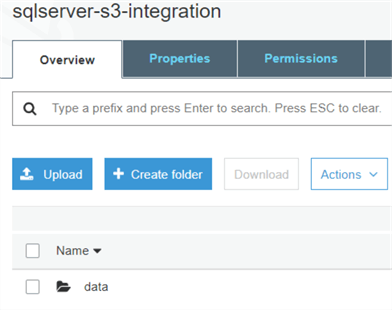 Notice how the files follow a naming style. Each file has a prefix "LAPD_Calls_for_Service_", followed by the year. Every file has an .csv extension. Here, we have files between 2010 and 2019. We will use these naming style in a script later.

We created a single-AZ RDS SQL Server 2017 instance in the same region as the S3 bucket (us-east-1, North Virginia): 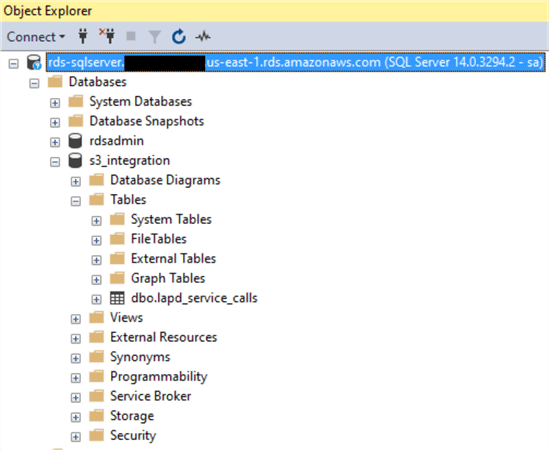 We created a database called "s3_integration", and also created a table called "lapd_service_calls" in it. The table's fields represent the source file columns.

Although some of the fields in the source data are numeric (Incident Number) or date (Dispatch Date) type, we are specifying each field as varchar to keep the loading process simple.

We will now configure the RDS instance for S3 integration.

The first step for RDS SQL Server integration to S3 is to create an IAM role with access to the source S3 bucket and folders. In the images below, we are creating an IAM policy with necessary access privileges: 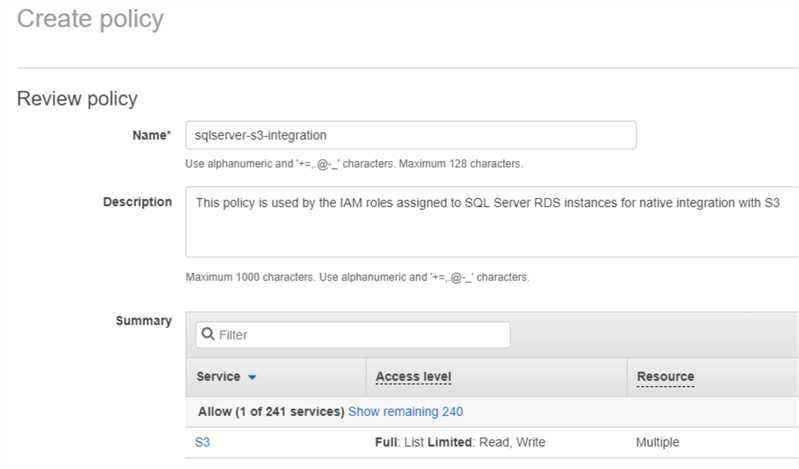 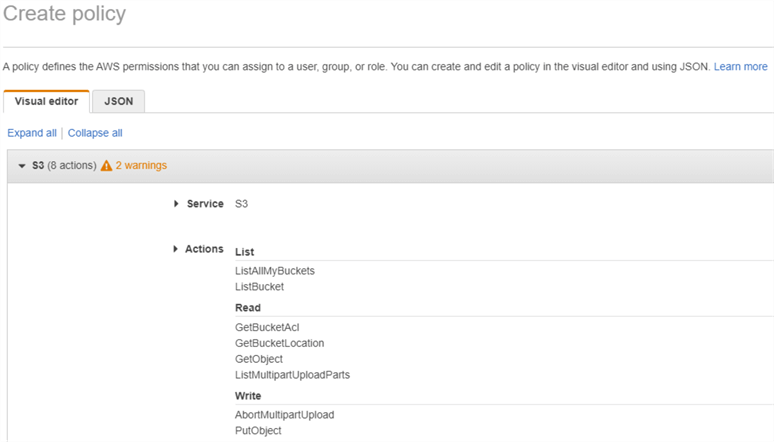 Finally, we are specifying the S3 resource on which these permissions will apply. In this case, we are providing the ARN (Amazon Resource Name) of the source S3 bucket. Note how we are selecting the option to include all objects (including folders) under this bucket: 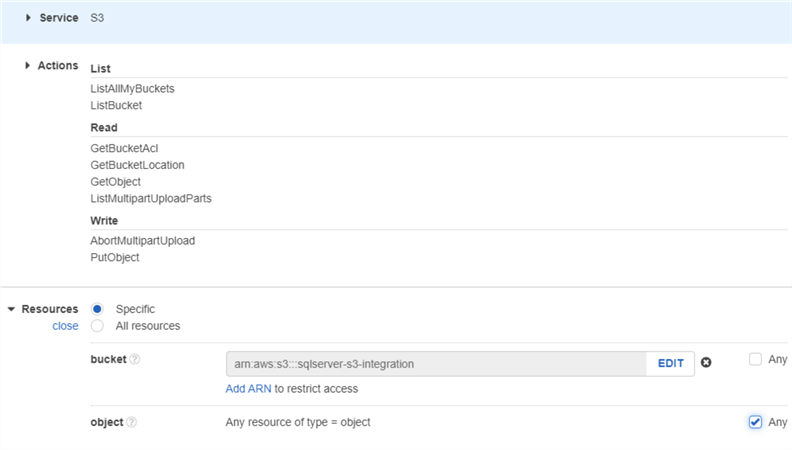 Once the policy is created, we have to assign it to an AIM role. In the images below, we are creating an IAM role with the same name as the policy, and assigning the policy to it: 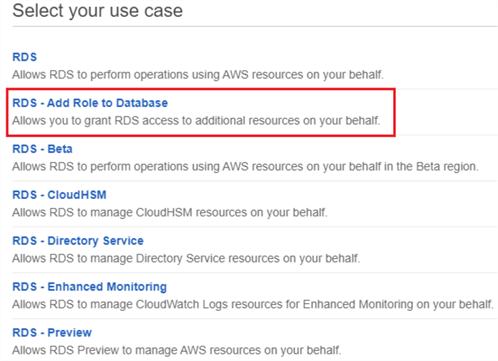 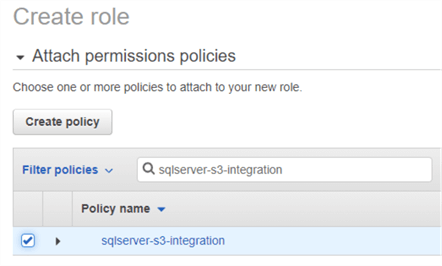 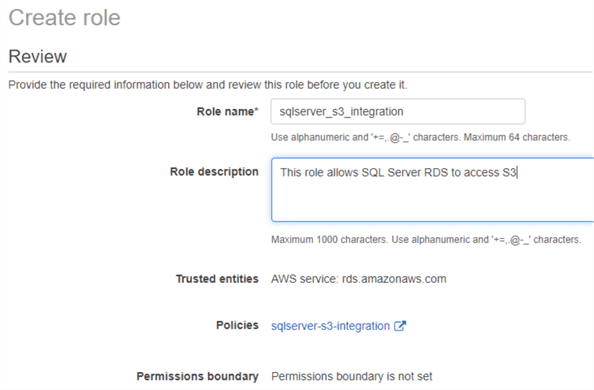 The next step is to attach the IAM role to the RDS instance. This can be done from the "Connectivity and security" tab of the RDS instance's property. Under the "Manage IAM roles" section, we can select the role just created and then select "S3_INTEGRATION" from the "features" drop-down list:

Once the change takes effect, the role has "Active" status:

Importing the data from S3 into a database table involves two steps:

The first parameter specifies the ARN of an S3 file.

The second parameter sets the destination path in the RDS instance. The root path is D:\S3\, but we can specify a custom folder name under it. The folder will be created if it doesn't already exist.

The third parameter is a flag. It indicates if an already downloaded source file will be deleted when the procedure runs again.

Instead of running this command multiple times, we are using a small script to automate the process:

This script loops through the numbers 2010 and 2019, and dynamically builds each source filename within each loop. As we saw before, the source files have a common naming pattern, which makes this process easy. A dynamic SQL command is then generated with the file name to call the rds_download_from_s3 stored procedure. Note how we are using a custom folder ("source_data") to save our files.

With each iteration, a download task is added to a queue for the RDS instance. RDS for SQL Server processes the tasks in this queue sequentially. At any time, there can be two tasks running simultaneously.

We can check the status of all the queued tasks by running the "rds_fn_task_status" function:

The first parameter value is always NULL. The second parameter is the task ID. In this case, we want to know the status of all tasks, so we specify 0.

The image below shows the various task status. Note how some download tasks have succeeded, one is in progress, and some are yet to run. Also, the last task ("LIST_FILES_ON_DISK") was added when we ran the "rds_gather_file_details" stored procedure. This task has an ID of 15.

When all files are successfully downloaded, and the "LIST_FILES_ON_DISK" task is also completed, we can run another function to see the list of locally downloaded files:

The "rds_fn_list_file_details" function's parameter value is the task ID of the "LIST_FILES_ON_DISK" task. In this case, it was 15. The image below shows the result:

We can run a series of BULK INSERT commands to load the data into the table we created. The code snippet below shows the load process:

Once again, we are using the year as a variable and looping through the values between 2010 and 2019 to build a dynamic SQL command. Once all the files are loaded, the output looks like this: 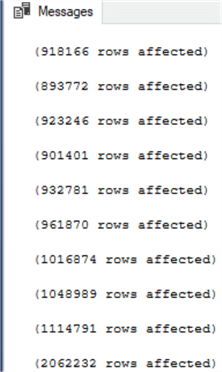 We can now run a query to see the total number of rows loaded:

We can also run some analysis on the loaded data. In the code snippet below, we are finding the total number of calls made to LAPD every month about possible occurrences of domestic violence in the Hollywood neighborhood.

The results may show some interesting trends: 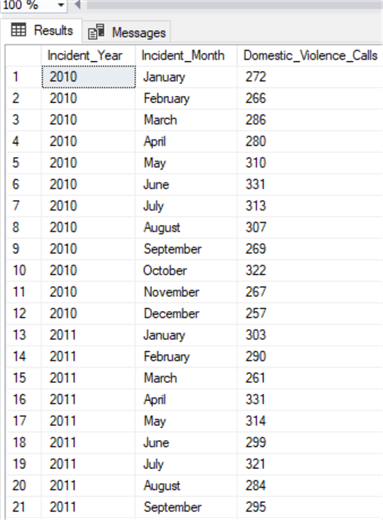 A Few Points to Remember

There are some limitations to RDS' integration with S3.

Secondly, only files without any extension or files with the following extensions are supported:

Third, the maximum number of files allowed for local download is 100. But this can be overcome by removing the files once they are imported into a database.

Fourth, the maximum file size allowed for download is 50 GB.

Fifth, the S3 integration feature isn't automatically enabled in a restored RDS instance. It has to be reconfigured once an instance snapshot is restored.

Sixth, the files in the D:\S3 folder are lost when an RDS instance fails over to its standby replica node in a multi-AZ setup. The S3 integration needs to be reenabled in the new node.

There are other RDS-specific stored procedures for S3 integration:

This article showed how to use RDS SQL Server's S3 integration feature. Readers are encouraged to refer to AWS documentation for more details. Also, it will be worthwhile to build an ETL framework based on this feature and develop