A columnstore index is an index that was designed mainly for improving the query performance for workloads with very large amounts of data (e.g. reading data warehouse fact tables and processing OLAP cubes).  This type of index stores the index data in a column-based format rather than row based as is the case with traditional indexes.

Columnstore indexes provide a very high level of compression, up to 10x, due to the fact that the data across columns is usually very similar and will compress quite well.  The second reason to use columnstore indexes is to improve performance of queries.

In this tip, we will show how to add columns to a non-clustered columnstore index.

Let's look at this SQL Server table as an example.

In the above query, tables that start with "fact" with non-clustered columnstore indexes are selected. The tables are identified by the table prefix “fact”. You might have different ways of identifying the tables. Also, in any environment you may have tables with OLD, BACK, etc. in the name, so those are filtered out as well.

The WITH (DROP_EXISTING = ON) option is added to the index, so the index does not need to be dropped separately.

When I ran the above script, it generated the following create index script:

After executing the create index script, the remaining columns were added to the non-clustered columnstore index. Unlike in a standard row-based index, the column order does not matter for columnstore indexes. 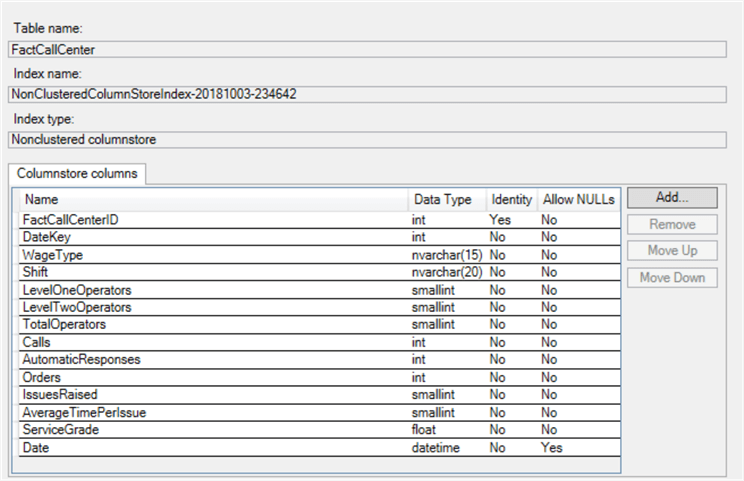