An MSSQLTips webinar was presented about the columnstore index features in the SQL Server 2016 database engine. This tip answers some of the questions asked during the webinar. You can view the webinar on demand here.

Maintenance on a columnstore will focus on two parts:

You have two maintenance commands for indexes:

To answer the question: reorganize will only help with fragmentation (deleted rows) in SQL Server 2016 if there are more than 10% rows deleted in the rowgroup. If not, only rebuild can get rid of deleted rows.

You can find more information in the blog post Maintenance Solutions for Columnstore or in the official documentation.

Question 2 – How much data should be in a table before a columnstore index makes sense?

A columnstore index really pays off when you have large scans of the data. This is because of the high compression ratio and segment elimination. In order to be a bit useful, a columnstore index should at least have a couple of rowgroups, which means a couple millions of rows.

However, it’s not only the number of rows that count, but also the size on disk. If your table is only 50MB, you probably won’t notice much difference in IO savings (but your queries can run in batch mode though). Once your table goes over 1GB, you can see some real improvements because compression might reduce the size to about 100MB (theoretically). You can also have great compression savings by using page compression though. So it’s the combination of a large number of rows and large size on disk – combined with typical data warehouse queries - that becomes the sweet spot for columnstore indexes.

The only advantage you will get from this method is that the columnstore index segments will be aligned for the column specified in the row-store clustered index. This improves segment elimination. If you just rebuild your columnstore index, your segments might become misaligned.

You can find more info in the blog posts Data Loading for Better Segment Elimination, The best column for sorting Columnstore Index on and Segment Alignment Maintenance. 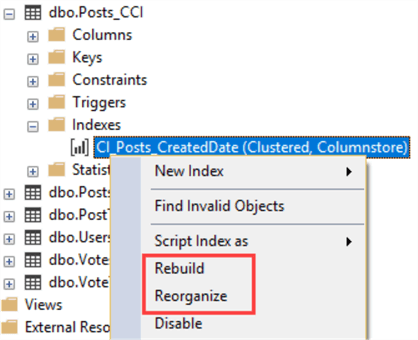 Question 4 – Which columns should you include in the columnstore index?

Question 5 - Will adding the column store index on a table impact the performance of database?

Yes. The whole point of adding columnstore index is to improve read performance, especially for data warehouse style of queries. However, like all indexes, they will also impact queries that modify data (inserts, deletes and updates). Especially updates are slower, because they are split out into deletes (which cause fragmentation as discussed in the first question) and inserts (which might end up in open uncompressed delta stores).

This means you can use Enterprise, Developer and Evaluation edition to test out columnstore indexes.

You can find more information in the documentation.

Using column store indexes the data is compressed right? What is the percentage of savings that we get in storage? What percentage is the data compressed?

Compression is one of the best features of columnstore indexes. You might expect compression up to 10x less the original size. However, a lot depends on the number of rows and the columns. For the columns, two factors play a very big role in the compression ratio:

Can a columnstore index be used in an OLTP database?

Absolutely. This is referred to as “real-time operational analytics” by Microsoft. You can even add columnstore indexes on an in-memory OLTP table (which makes the columnstore index really “in memory”). However, there are some guidelines to consider:

As usual, test well before you implement.

How to identify the best candidates tables for a columnstore index?

As mentioned a couple of times in other answers, columnstore indexes work best for large tables. In a data warehouse scenario, these are most likely your biggest fact tables and possible very large dimensions.

Take a look at the tip Identify the best tables for SQL Server 2016 Columnstore Index Migration for more information.