We use the previous decade as our data template for the current decade to help us execute decisions. In our transformation ETL steps, we sometimes want to add derived values based on the previous decade's average to our final report where we're comparing the current value to the average of the set. Sometimes, we use these derived values for other estimates that don't end on our final reports. We may sometimes manipulate the current or average value too used in these derivatives and right now we do this inefficiently through spreadsheets. How can we efficiently do this in our transformation steps without adding to many extra steps or use too many resources?

For this solution, we'll look at adding the derived values in the final step along with adding a possible configurable value for our report. We'll assume that we don't want these derived values based on the average stored, though we will see an alternative where we can also add these for storage if our situation calls for this. We also want the base values to determine how many derived values exist, so that our base to derivative values is always 1-1.

For this example, we'll create a test data set using a loop that creates 144 values, or 1 value for each month in the past ten years with the date and a random value that we'll be using for deriving values based on aggregates. In the below loop, we use the DATEDIFF function to subtract the looping value from the current date of December 15, 2010. In addition, we're inserting this time value along with a random value into our example table. From this example data, we will create a CSV file that we will use for a bulk insert later. 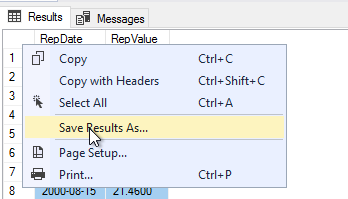 Because some systems will generate extra characters when we click Save As (as shown in the image), I will use a PowerShell import over BULK INSERT in this tip. In cases where numeric data needs extra effort to convert correctly, my general preference is to read the data using .NET as it's a simple object declaration over converting. This is only a preference and this may not be required. Some systems will not experience this problem when generating a CSV, so a BULK INSERT in the later step will function fine. We now have our test data set we'll use for this example - a source table of data (eltInitial) for one example and a data file for another example we'll import.

In the below code snippets we see two examples: the first is a query with the derived value added from the eltInitial table, which we might see as a final query in a report. This structure works when our derived value is a final value and our source is an existing table we can query. If this was only part of the process, we would be inserting these data into another table, and the same is true if we were using the derived values as part of a larger query. As long as their base values exist, we can add the derived values in the final step for the report. 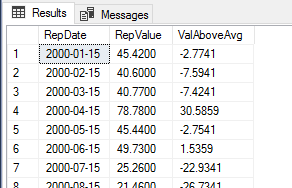 It's possible that we want to use the derived values for something that won't be on a final report - so we want to add them early for use that will be important for a future query and the final report which will not have them. Using our test data that we created, this would be like a final report that simply shows the final average value along with the average of the total value above average values - in this case, we only need the derived values for further analysis. In this second approach, we see on popular import approach: a table being created, the data from the CSV file we created being imported, a column being added to the table with an update to create the ValAboveAvg and a final query ready for the next step in our ETL process. With a process like this, we may have a step for validating data prior to deriving a value, such as cleaning and checking values, prior to loading data elsewhere. If I was using BULK INSERT, I would clean the data first following the import; with the below PowerShell, I could add validation within the script import. Since we are looking at adding derived values in ETL flows, this is an important consideration outside the topic. 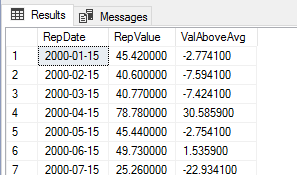 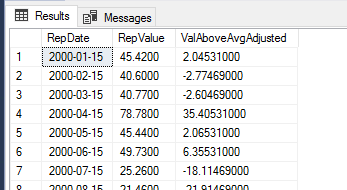 While we used average in this tip, we could use other aggregate functions such as maximum, minimum, etc. For an example, we might want to conservatively estimate how much oil we will extract from a well and use a minimum with a configurable value that lowers it further. Relative to what we want our final report to look like we may want the derived value and remove the base values (especially if there are multiple columns, which will add to the costs). During our extraction and load, we can remove those columns in the SELECT statements once we determine they are no longer needed, which will help reduce resource use.

What does an ETL Developer do on the Microsoft Data Platform?