I recently was tasked with tracking and monitoring views in the SQL Server databases that I administer.  Among the attributes that I am required to track are code module name, defining T-SQL for a module, created and last modified dates, and last run datetime.  Please demonstrate how to achieve these goals with T-SQL.

Views are a useful object for returning the contents of a select statement as a virtual table.  MSSQLTips.com previously published a quick and easy-to-read introduction to views.

In this tip, you will learn how to:

Three system views allow you to list user-defined views; these are sys.views, sys.objects, and information_schema.views.

The following script shows how simple it is to enumerate view names in a database with each of the preceding three systems views.

Here’s the output from the preceding script. 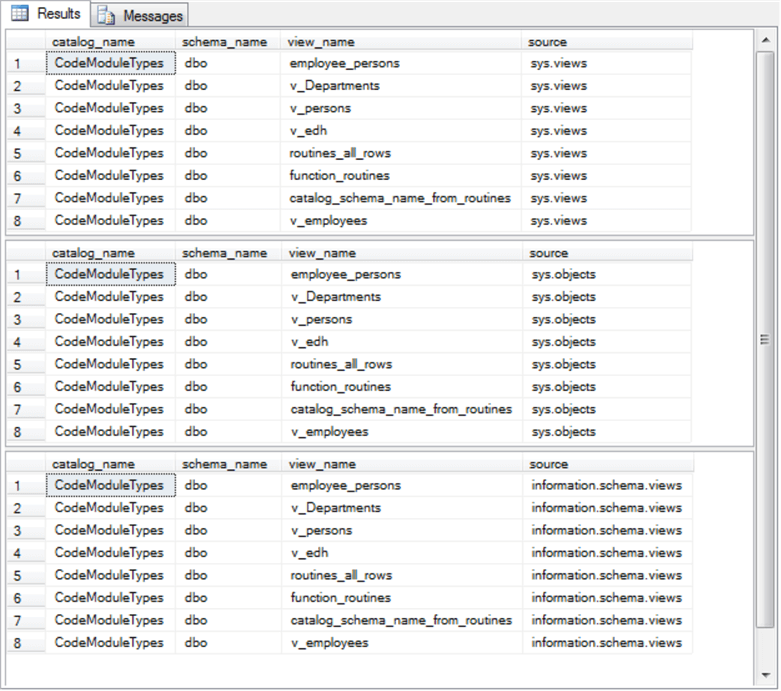 The code for this section, along with all the other sections in this tip, assumes the default database is CodeModuleTypes.  The following script returns the defining T-SQL code for views in the default database.  Views are identified by their three-part names (database or catalog name, schema name, and view name).  The built-in object_definition function can return the defining T-SQL code based on the object_id value of a row in sys.views.  Recall that sys.views has a separate row for each view in a database.  The object_definition function in the script below returns a create view statement for the object_id value on each row within sys.views.

You can select the contents of any T-SQL Definition column value and copy it to the Windows clipboard.  You can then paste its code to a new query tab or any empty space in the current query tab within SQL Server Management Studio.  The following screen shot shows the outcome of pasting the create view statement from the first row of the preceding screen shot to an empty query tab.  The query code can also include comment lines from the last time the code was modified via an alter view statement.  When copied to query tab, the code automatically appears in a more readable and editable format than as a cell entry in the T-SQL Definition column.  This reformatting of the code makes it much easier to read, understand, and modify (if necessary). 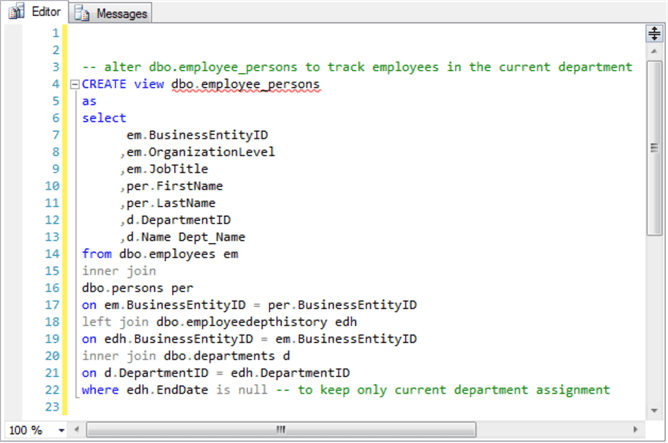 Here’s the results set from the preceding script.

When did a SQL Server view last run?

A query invoking a view can operate from a query batch.

The following script illustrates how to apply the preceding three design guidelines for assessing the number of seconds between two successive invocations of a view named employee_persons in the dbo schema of the CodeModuleTypes database.  The script assumes that a use statement was issued previously to denote CodeModuleTypes as the default database for the script.

Here’s an excerpt from the output for the preceding script.  The excerpt contains three panes.