Throughout our career as SQL Server DBAs, we are often faced with the classic scenario "it seems there are performance issues with the database". Well, there are times when the issue isn't the database server, but when it is, wouldn't you like to have a way to capture exactly what's running at a certain time frame for post-analysis? Well, you might think about setting up a trace, extended events, or even examining the plan cache to see if you can find the culprit, but doing this for a specific set of instances at the same time can be a bit challenging to achieve. Regardless of that, a tool I like to use for quickly checking "what's going on in my instance" is the stored procedure sp_whoisactive. In this tip, I'm going to present you a custom data collection mechanism that you can very easily setup to monitor what's going on in one or a set of instances, using the power of sp_whoisactive.

The main goal of the PowerShell script in this article is to have a mechanism to automate the data collection process of queries currently being executed (those long enough to be captured by sp_whoisactive of course), in one or several instances, and store this information in a central database for post-analysis. This is basically one more monitoring module from the series of modular monitoring scripts I have been contributing to the MSSQLTips community.

In order to use this module, you'll need the following:

For this particular module, only one table will be created (in case it doesn't exist), and it is the table to store the information of the execution of the sp_whoisactive stored procedure, from each instance.

If you want to add more fields to this table, make sure to adjust the structure within the PowerShell script and adapt the respective logic that will handle that additional field.

There will be times when you simply don't want to collect this information from all the registered instances you have in your Master Server List. To address this, simply modify the query text inside the variable $instanceLookupQuery within the PowerShell script and you should be good to go.

How to use sp_whoisactive in SQL Server

Here are the database objects that you should see in your central database after executing the PowerShell script: 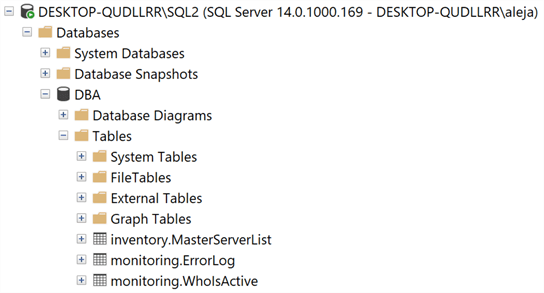 To show you an example of the output of the data captured by the PowerShell script, I have faked a bit of activity in one of my instances by running a simple WAITFOR DELAY '0:05' and this is what it looks like after querying the monitoring.WhoIsActive table:

I have selected just a few columns to make the image easier to read, but the real table has all the fields described above.

As you can see, I have 2 entries for the exact same query, but it is because I executed the script 2 times. Depending on your own use case, you might want to truncate the table each time you execute the script, or just keep the most recent query execution captured per session id.

If the instance(s) you are targeting doesn't have the stored procedure deployed, then you will see something like this in the monitoring.ErrorLog table:

If you'd like to know the SQL Server instance that had errors, you would have to issue the query like this:

Order the result set by queries that have consumed the CPU resources from longest to lowest time:

Order the result set by queries that have performed the most writes:

Order the result set by queries that have a memory usage from highest to lowest:

Search for queries that contain a certain string:

Order the result set by queries that have been executing from longest to lowest time:

Check out other parts of this series: