Data integrity is a critical aspect of an organization managing sensitive data such as medical, financial, personal, etc. These databases complete regular audits and require legal compliance (SOX, PCCI, GDPR, etc.). Audits require evidence to proves your data is safe and has not been tampered with by a malicious party. There has been a recent trend of increased digital data breaches, according to UpGuard.com a few recent data breaches include:

Therefore, Microsoft Azure announced Azure SQL Database Ledger for data protection from any malicious activity by an attacker, including a high privileged user (Database Administrator or System Administrator). It also provides tamper-evidence capabilities so that you can cryptographically attest data to auditors and business parties. It can work as proof that your data has not been tampered with by unauthorized access.

Note: Azure SQL Database Ledger is currently available in the West Central US at the time of writing this article.

The Ledger stores historical data in a history table. The ledger records all changes and retrieves all of them in a chronicle order over time. It can contain both ledger and historical data. Azure manages these data transparently without any application-level changes. You can access the historical data for compliance, audit, forensics, or any other purpose.

The following diagrams give a high-level overview of Azure SQL Database Ledger. 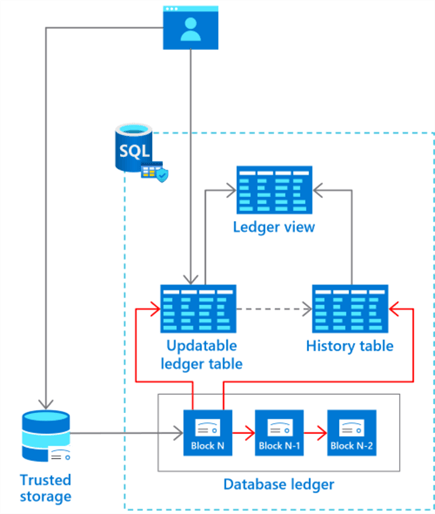 In the Azure ledger database, each transaction is cryptographically hashed using the SHA-256 algorithm. The hash function has an input of the hash value of the transaction along with the previous transaction hash. As shown in the above image, the database ledger links all transaction blocks similar to a blockchain. Azure also uses trusted storage such as Azure Storage immutable blobs or Azure Confidential Ledger for storing the database digests. The latest block hash is known as database digest. Azure stores these digests periodically and represents a database statement at a given point in time. Since Azure stores these digests into separate storage, it prevents tampering from malicious activity. Users also choose to generate the database digest manually and store them in a safe and secure location of their choice. This is very useful in the ledger database to verify the ledger table / data has not been tampered.

Is a collection of system tables for storing the cryptographic hash of processed transactions. Whenever a transaction commits, the database ledger keeps the following information.

Azure repeats this process every 30 seconds, and it forms a Merkle tree data structure in a blockchain format, as shown below. 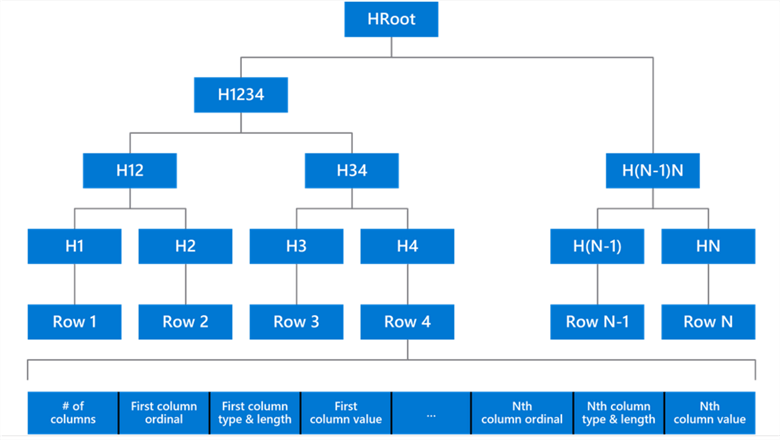 These tables are the system versioned table that allows users to update and delete operations while maintaining tamper-evidence capability. Once the user connects to Azure SQL Database Ledger and performs an update or delete transaction, Azure stores the previous versions of a row in the secondary history table. The history table has the same schema as the updatable ledger table. Therefore, the updated row is in the ledger table, and the earlier version is in the history table.

Each updatable ledger table must have the following GENERATED ALWAYS columns in a BIGINT data type.

Azure ledger database automatically creates a history table for the updateable ledger table. This table stores previous versions (historical value) of the modified or deleted row in the updatable edge table. Azure uses system-generated names for these tables and its naming convention is below:

The diagram (above) shows that the ledger view joins both the updatable ledge table and the history table. Azure ledger database creates this view automatically for every updatable ledger table. You can use this view to report all data modifications since it has the recent data (ledger table) and historical data (history table). Users can retrieve the transaction timestamp, user identity and operation details (delete or insert statement). For example, we can view chronicled banking transaction history using the ledger view instead of writing your query or view.

The Append-only ledger table is suitable for applications that do only inserts, such as Security and Event Management applications. You cannot perform DELETE or UPDATE transactions even using a high privileged account. These tables do not have any history table because they are non-modified (no update or delete) data. It has a corresponding view to get detailed information about the inserted row into the append-only tables. 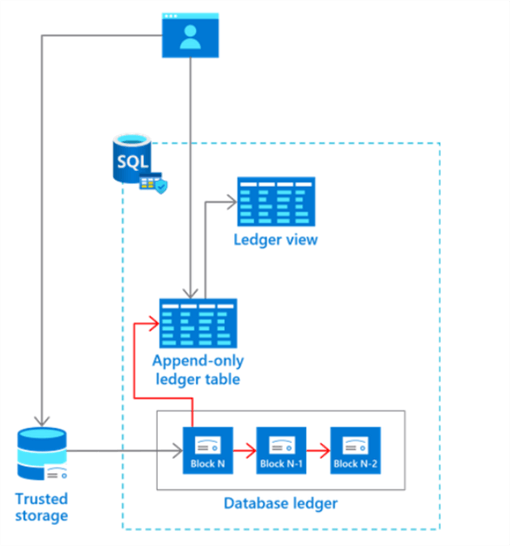 This article gives you a high-level overview of Azure SQL Database Ledger (preview) along with its functionality and components. The ledger is an exciting feature that adds a valuable and essential element in the Azure database for critical and sensitive application data.