This tutorial will demonstrate how to migrate via JSON key-value pairs from a Python dictionary object to a SQL Server table. It will provide an in-depth review of how the key-value pairs are originally stored in Python, transformed to JSON, and exported to a file along with a use case example that reinforces how to import JSON data from a file and display the data within SQL Server.

JSON (JavaScript Object Notation) is a popular open file format for exchanging data between applications as well as receiving data from a server. Because of the widespread adoption of JSON for exchanging data, it is increasingly important for SQL Server administrators to become familiar with how to retrieve and save JSON data for input to SQL Server tables. Also, SQL Server administrators may participate in projects for receiving content in JSON data files originating from other applications, such as Yahoo Finance. This tip presents a use case example for retrieving key-value paired data from Yahoo Finance with Python in order to export the key-value pairs to a file with a JSON data format for retrieval and saving in a SQL Server table.

Summary of the use case

Python is especially prized for its ability to interface with various application programming interfaces, such as those from Yahoo Finance for financial data and the National Oceanic and Atmospheric Administration for historical weather data. A recent MSSQLTips.com tip includes coverage of the yfinance library for use with Python. The yfinance library for Python can facilitate downloading historical price and volume data as well as fundamental data, such as number of employees, total public shares available for trading (float), and the number of shares shorted in a security. The fundamental data is available for each security via a Python dictionary object.

This tip shows how to track the number or percentage of short shares for a financial security, such as a company’s stock shares.

This section of the tip displays and describes a Python script for populating two .json files. Each file contains fundamental data on one member of the pair of stocks. The next section in this tip reviews selected output from the script in order to clarify further how the code works. The next-to-last section of this tip presents and describes T-SQL code for importing into SQL Server the two files exported by the script in this section.

The Python script resides in an IDLE window. IDLE downloads automatically when you install Python from Python.org. IDLE is one of several developer environments for writing, saving, and running Python scripts. The script’s filename (get_fundamental_data.py) appears at the top of the screen shot below. SQL Server professionals may find it useful to think of IDLE for Python code in the same way that think of SSMS for T-SQL code. Comment lines in the script segment the code into seven steps. Each step starts with a marker for a comment line (#). 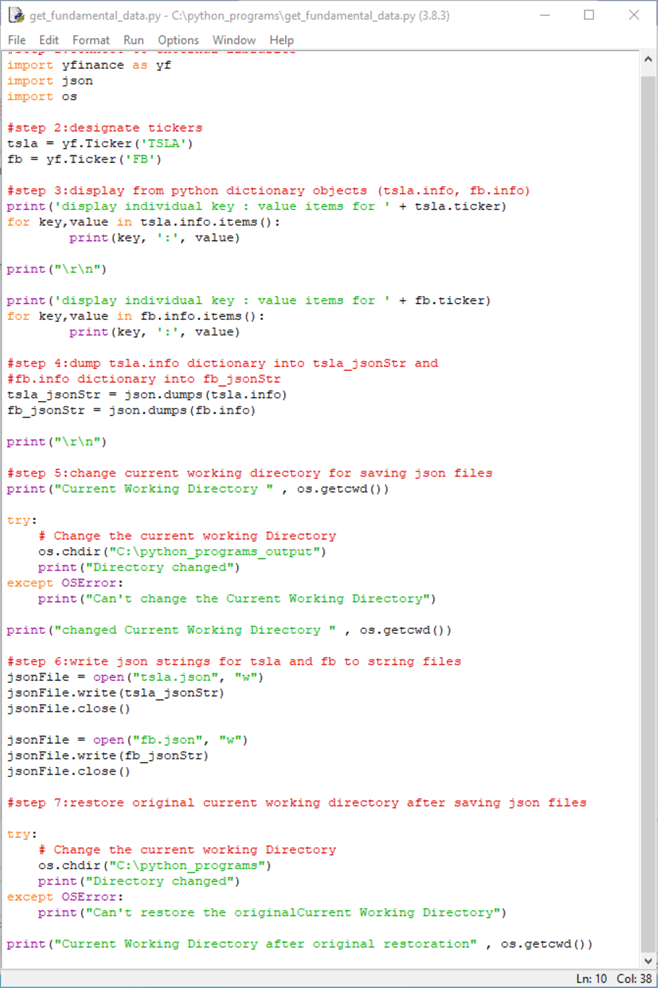 Output from the get_fundamental_data.py script

Your understanding of the Python script described in the preceding section is likely to be enhanced by reviewing selected excerpts from the script’s output.

The following screen shot is an excerpt from the top of the Python shell after running the script. 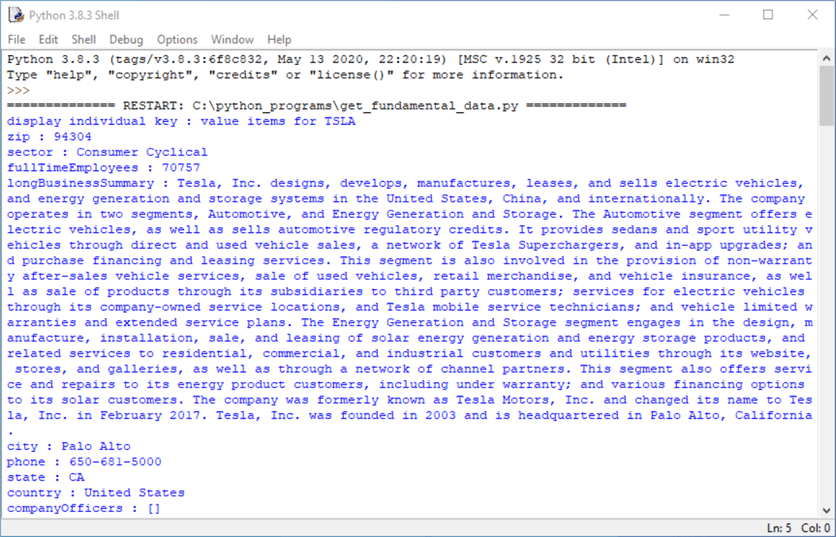 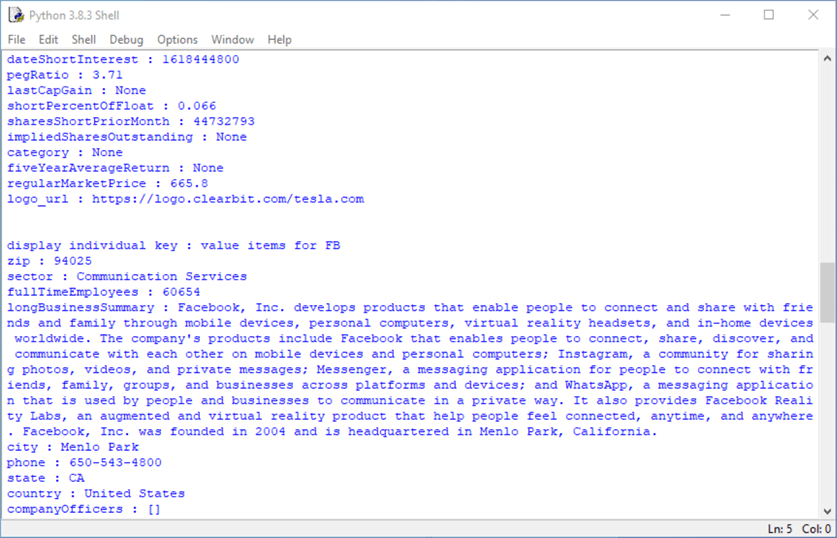 The next screen shot shows a view of the first several JSON key-value pairs in the tsla.json file. The screen shot is from the Windows Notepad application.

The bottom of the tsla.json file within a Windows Notepad application appears in the next screen shot.

SQL Server expects JSON formatted data to be encoded in Unicode characters. However, the preceding Python script populates the tsla.json and fb.json files in ascii characters with non-ascii characters escaped; the dumps function in the Python JSON package operates this way with its default settings. The general topic of the character set output format from json.dumps() with Python has a variety of special issues that goes well beyond the scope of this tip (see more details about json.dumps() character set output format here, here, here and here). 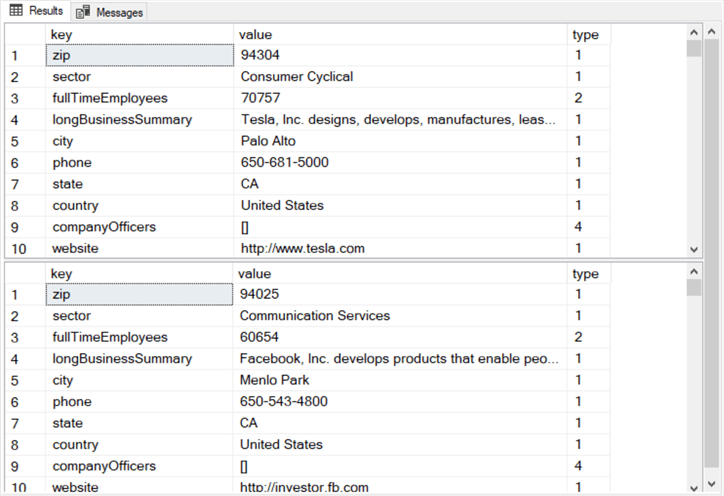 The next screen shot displays the last ten key-value pairs for the Tesla, Inc. and Facebook, Inc. in the top and bottom panes, respectively. 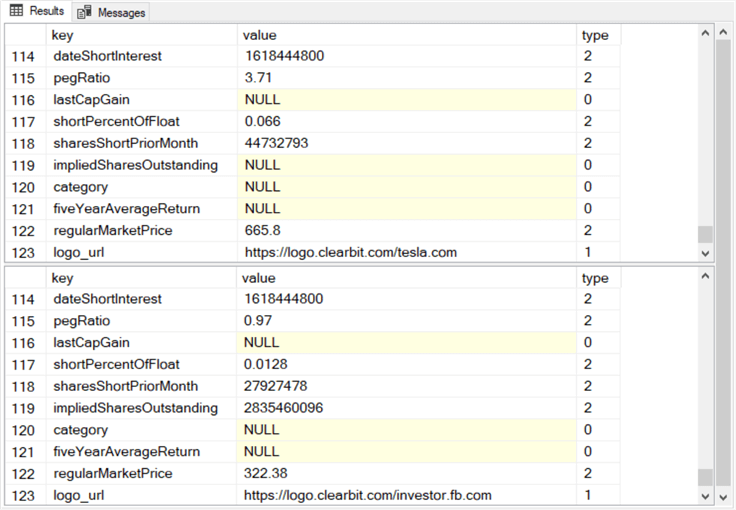 Here is the results set from running the preceding script. The with clause in each select statement returns just a small subset of key-value pairs.

This tip’s download file contains the Python and T-SQL scripts presented in this tip. If you re-run the Python script, the values for key-value pairs are likely to change from those reported in the tip because key values change on a regular if not daily basis.

There are really two parts to this tip.

The "Summary of the use case" and "Python steps for exporting JSON files with key-value pairs from a dictionary object" sections offer another type of next step. This tip does not necessarily apply to attributes of ticker symbols. If you are working with another type of data that exports key-value pairs for other kinds of values, then you can modify the code to work with attributes for that kind of data. For example, if you had a data source with weather observations for amounts of snow, rain, temperature, and wind speed from different weather stations in different geographic locales, then you could document weather station attributes in a dictionary object. Possible weather station attributes might include state, county, and city jurisdiction names as well as latitude, longitude, and hemisphere for the weather stations.