I notice the increasing popularity of JSON content for exchanging data over Internet as well as for a lightweight way of storing log and measurement data. I also notice the growing functionality of SQL Server to accept, store, and process JSON data. Please provide several examples of SQL Server functions that illustrate how to accept, store, and process files with JSON content.

JSON (JavaScript Object Notation) is a text-based format for representing data via key-value pairs. The JSON format is more compact than XML, but JSON provides many of the same advantages. Its compact size makes it a fast format for exchanging data. Just like XML, JSON is easily read by humans. JSON's ability to hierarchically represent data and to nest hierarchical data within other key-value pairs facilitates its ability to represent complex hierarchical relationships across data elements.

This tip drills down on how to process JSON files with SQL Server while building on previously covered techniques as well as demonstrating a novel approach for extracting key values from JSON nested key-value pairs. The processing is performed by selected built-in SQL Server functions. The JSON file used in examples within this tip can be retrieved from this tip's download file as well as from a link to a Restful API.

The sample JSON file for this tip

The Alpha Vantage API is a freemium service with free and premium series available for download via the internet. Among the historical data series are stock price and volume data, company revenue and income, foreign currency and crypto currency exchange rates, and economic indicators. The documentation includes a link for downloading free daily prices for the IBM ticker that does not require a special key and is available without charge. The link permits harvesting of the most recent 100 trading days to a browser on your computer. Alternatively, you can retrieve the exact same JSON file used in demonstrations within this tip from its download file.

Here are a couple of screen shots from the Notepad++ application showing lines of JSON data from the beginning and end of the file available from this tip's download file. Notepad++ is a free application similar to Microsoft Notepad but with more advanced features for working with text files, including JSON data files. The Notepad++ output highlights the relationships between key-value pairs in a JSON file. 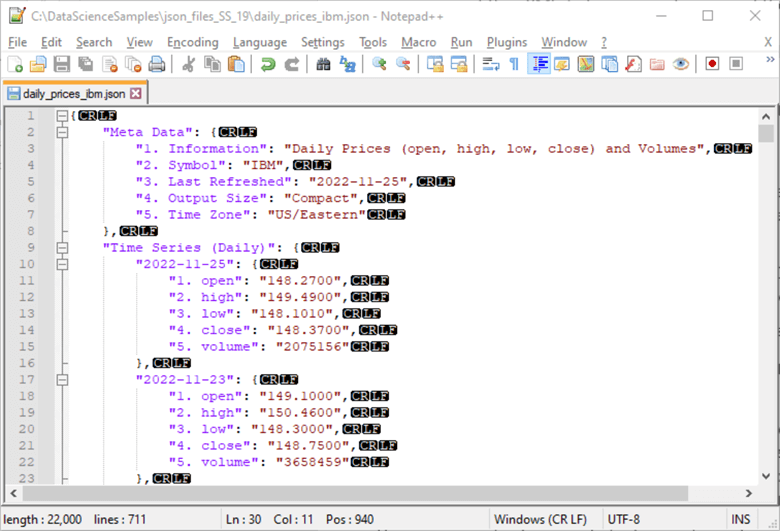 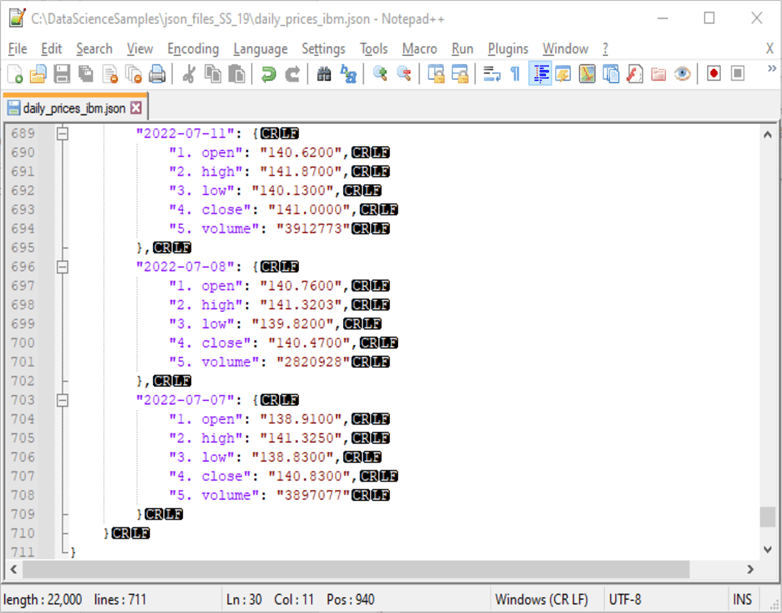 Opening and displaying the sample JSON file in SQL Server

You can use the openrowset function to access the JSON text in either varchar or nvarchar format for import into a SQL Server table column. Then, you can assign the table column values to a local variable. Next, you can open and display with the openjson function top-level key-value pairs from the JSON file copied to a local variable. The following script implements these steps.

The next screen shot shows the output from the preceding script.

The bottom border of the two screen shots in the preceding section shows that there are 711 lines in the NotePad++ portrayal of the JSON file. However, the following screen shot highlights that there are just two outer-level keys named Meta Data and Time Series (Daily) in the JSON file. All the other key-value pairs within the JSON file appear within one of these two outer keys or an object within one of these keys. These keys appear in the default format for output from the openjson function.

The next script segment is meant to run immediately after the preceding script segment in the same script file. There are three select statements in the following segment.

The following script segment shows one approach to this task. This script needs to run in the same script file as the prior two script segments. Two important reasons for this are that

Here is the new script segment for parsing the close values for each trading date in the Time Series (Daily) object.

The following screen shot shows an excerpt from the output for the second select statement in the preceding script segment.

The next screen shot shows an analogous excerpt from the third select statement in the preceding script. This results set excerpt is also for the first five successive trading dates.

There are two files in the download for this tip. First, there is a JSON data file with the same values as those shown in the tip. Second, there is a SQL script file that references the downloaded JSON file and performs the extract operations demonstrated in the tip.

After saving the JSON file and configuring the SQL script file to point at your saved version of the JSON data file, you can see if you get the same results as presented in this tip.

Next, you can use the link in the "The sample JSON file for this tip" section for downloading a fresh version of the data. Then, you can copy the data from your browser to a text file and save the JSON file to a path of your choice. Finally, you can point the SQL script file at the fresh text file that you downloaded from the link.

If you have some JSON files in your organization, you can adapt the code in this tip to process them for use with SQL Server.