I've become interested in the JSON file format and what it can do. Can you briefly highlight the key benefits of using JSON files with the Python programming language? I'm also interested in how to create JSON files with a text editor, load the created JSON files into Python, parse JSON and display the contents. Lastly, I could benefit from a demonstration showing the difference between simple JSON and nested JSON.

One popular use case for JSON files with Python is data exchange. JSON (JavaScript Object Notation) is a lightweight format for exchanging data between computers. Because a JSON file consists of key-value pairs in a text format, humans can easily read its contents. A JSON file is language-independent; therefore, you do not need JavaScript to use JSON files, and you can process JSON files in other languages besides JavaScript, such as Python or T-SQL. The structure of JSON files is more compact than XML files. Therefore, JSON files can be sent over the internet and loaded faster than XML files.

One typical JSON file use case is when a client computer requests information from a server, which is passed from the server computer via a JSON file to the client computer.  When a web-based server runs a RESTful application programming interface (API), it commonly satisfies requests via JSON files.  A previous MSSQLTips.com article titled Overview of How to Collect Securities Prices for SQL Server devotes a section to introducing the Alpha Vantage RESTful API. The Alpha Vantage offers both free and paid tiers of service. The securities prices tutorial showed excerpts from a downloaded JSON file from Alpha Vantage. However, the prior tutorial has narrowly focused coverage on how to generate JSON files and exchange them between computers.

With regards to JSON files and Python scripts, this Python tutorial is at more of a beginner's level than the previous article. The tutorial includes a couple of examples that start with creating a JSON file in a text editor, then loading and displaying the file's contents in Python. One example is for a file with simple JSON, and the other is for a file with nested JSON.

If you can open Python and load a Python script file, and you have previously used a text editor, such as Notepad++ or Notepad, then you will be able to run the examples in this tutorial. If you do not already have Python installed on your computer, you can learn more about it and obtain a free copy of Python from Python.org. By running the samples in this script, you will receive an introduction to the interoperation of Python and JSON files that will grow your Python programming capabilities and improve your understanding of JSON files.

The following screenshot shows a JSON file with the basic JSON types of string, number, object, array, boolean, and null in a Notepad++ session. The syntax for a basic JSON type is a key name followed by a colon, a space, and a value. A key's value can be any of the six basic JSON types. A comma follows all key-value pairs except the last one in a simple JSON file. Two basic JSON types appear twice in the screenshot below with two different values. 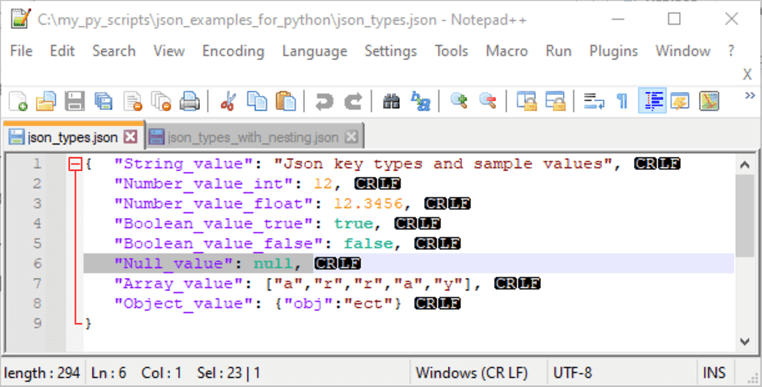 The next screenshot shows an example with nested JSON. This screenshot displays the json_types_with_nesting.json file in a Notepad++ session.

The syntax for nested JSON has these conventions:

A JSON array can contain any ordered sequence of basic JSON type values. The type values must be comma delimited. 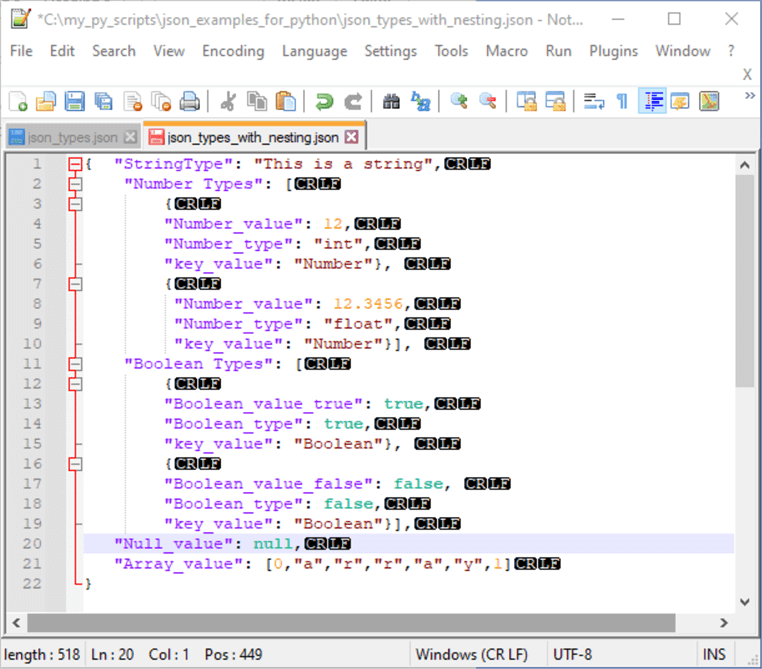 The process for loading and displaying a JSON file in Python is the same whether your source data file is in simple JSON format or nested JSON format.

The following screenshot shows a sample Python script for loading and displaying a JSON file in Python. The screenshot is from the IDLE application, which is an integrated development environment for Python scripts. Recall that IDLE downloads and installs automatically along with Python from Python.org. This script runs the 3.10.4 version of Python available from Python.org. This Python version also ships with the JSON and pprint package libraries. The two import statements at the top of the following script reference these packages. 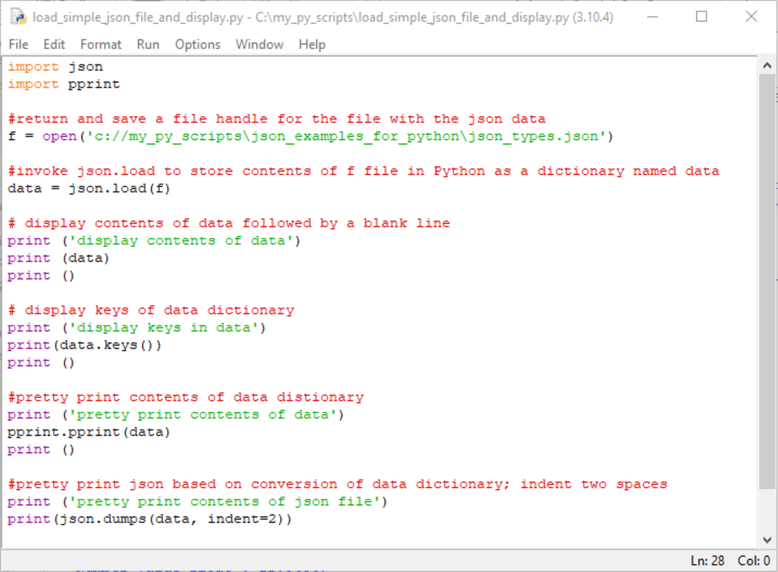 The first print statement in the preceding script shows the content of the data dictionary as an unformatted string of key-value pairs. Notice that it is hard to follow. If you carefully examine the output, you might note that the formatting of content in the data dictionary is slightly different from the contents of the JSON text file. However, the most obvious difference is that the structure of the JSON file in Notepad++ makes the key-value pairs relatively easy to read. In contrast, the text values from the data dictionary are relatively hard to read because the displayed contents do not reflect the structure of the JSON data.

Here is a copied portion of the first print statement's output from the IDLE shell window. This output begins with content from the Python operating system. Next, a brief description of the output appears before the actual contents.

Here are several differences that stood out to me between the underlying JSON data and the pretty print output:

Here is the Python script for displaying the contents of the JSON file with a nested JSON format. If you compare this script with the preceding script for the loading and displaying the contents of a JSON file with simple JSON formatting, you will discover that the scripts are the same, except for the name of the JSON file. The following script references a file with the name "json_types_with_nesting.json" in its open statement, and the preceding script references a file with the name "json_types.json". In other words, the same Python code can load and display the contents of JSON files, whether the file is one with a simple JSON format or one with a nested JSON format. As a result, the remaining text in this section reviews the output from Python and compares it to the source JSON content in the referenced JSON file. 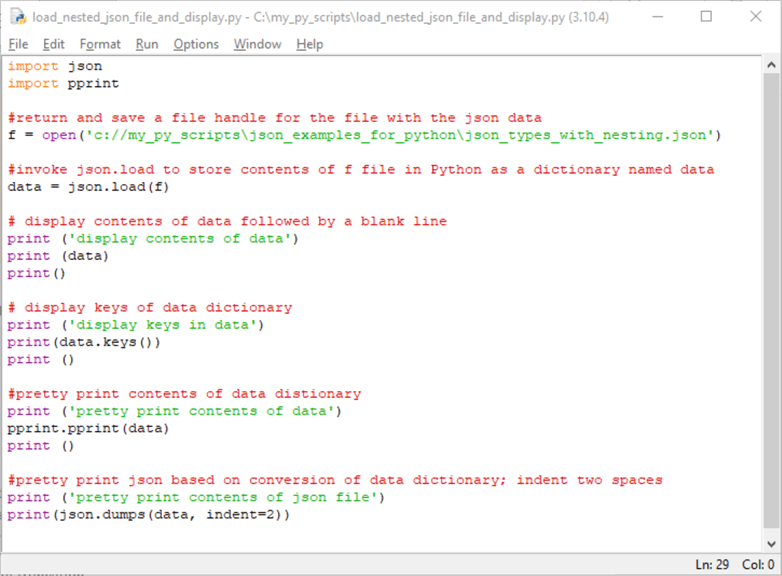 To process the original JSON file with nesting in Python, it must first be copied to a Python dictionary object. The following excerpt displays a segment of the output that shows the JSON in a dictionary without pretty print formatting. The results are copied from the IDLE shell window. Note: It is not easy to read this output because the content is not formatted based on the structure of the underlying JSON data. Nevertheless, if you know precisely what you want to review, sufficient attention to detail may permit you to find what you want in the output.

The pretty print version output from the pprint function also transforms the capitalization for selected values, such as True and False.

For previous alternative articles on Python and/or JSON for SQL Server professionals, you can examine these other tips:

This article has four resource files in its download:

An initial next step after reading the tip is to load both JSON files into a text editor, such as Notepad++. Next, use the python script files to confirm that you can load and display the JSON file contents as demonstrated in the tip's examples.

Then, carefully review the instructions for creating a JSON file as a basis for modifying the JSON files provided in the download with this tip. For example, instead of using key names for basic JSON types, use selected products and/or services provided by your enterprise as key names and values. Then, load and display the modified JSON files with the python script files.

Finally, search the internet and/or your company's internal web resources for an API with content that you would like to download to your computer. Next, follow the API's instructions for downloading content and specify that you want your content in a JSON file in case the API supports multiple output formats. Then, load and display via Python the downloaded JSON file in Python from the API you reference.