I notice the increasing popularity of remote data access from Restful Application Programming Interfaces (APIs). In this remote access scenario, data are collected from an API, often via JSON files, when a client computer connects to an endpoint on the computer running the API. I seek use case examples demonstrating how to download and process JSON files via Python from a Restful API.

This tip presents several examples for requesting and processing data from a Restful API accessible over the internet. JSON files are a common means for a Restful API to share data with remote client computers. Python is widely used for these kinds of use cases because of its power, simplicity, and adaptability to many tasks, including remote data access over webs. SQL Server developers will likely find Python somewhat familiar because it is just another scripting environment like T-SQL.

The examples in this tip walk you through several basic Python code examples for downloading data in JSON files over the internet. In addition to the code reviews, sample results are presented to clarify the operation of the code. The examples in this tip use Python version 3.10.4, available from the Python.org site, without charge. Python scripts are run in the IDLE application that automatically downloads when you install Python from the site.

Take time to read this previous article about key-value pairs, json files, and loading and displaying json files in Python. This article picks up where the last article leaves off.

This tip demonstrates the use of the Alpha Vantage Restful API with both JSON files and Python scripts. The Alpha Vantage API is a freemium service that makes securities and economics data available at free and paid levels. The techniques covered in this tip will likely help you request and collect data from other APIs that serve other kinds of data over the internet. Here are four additional resources for learning more about the weather, news, US Fiscal Data, and additional financial data Restful APIs.

The Python script examples in this tip require you to obtain an Alpha Vantage key. However, scripts are available in this tip's download (see Next Steps). You can use your key with the Python scripts in the download to access the Alpha Vantage API. The scripts, excerpts from scripts' output, and the accompanying commentary in this tip are designed so that any motivated beginner or mid-level data professional can acquire the fundamentals of programming remote data access for Restful APIs with Python scripts for downloaded JSON files. Run the sample scripts in the download, and you will gain familiarity with the fundamentals of remote data access for Restful APIs.

Downloading Daily Prices and Volumes for a Ticker Symbol

The following screenshot is for a Python script to download daily prices starting from the most recent date at the time of the download for the SOXL ticker in Alpha Vantage. 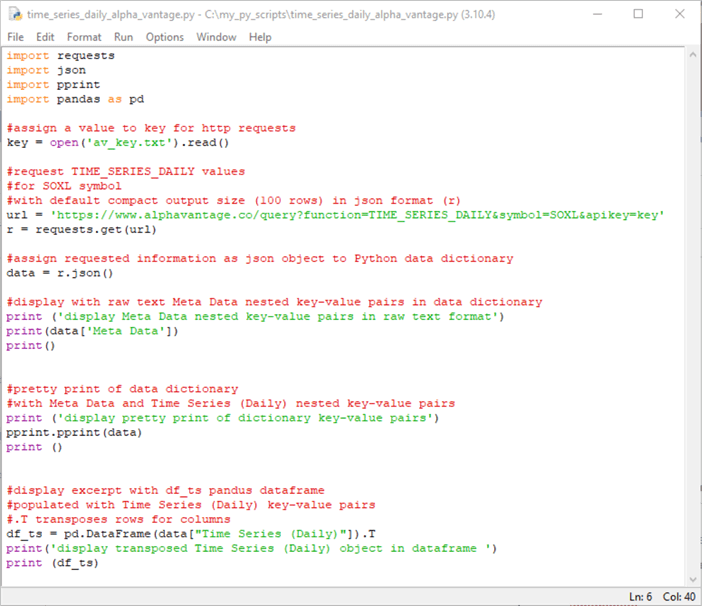 The remainder of this section tells a story about what the preceding script does by examining excerpts from the print and pprint function calls in the script.

The following screenshot shows the top of the IDLE Shell window with the first print function call output. This function call is to display the contents of the Meta Data key in the data dictionary. 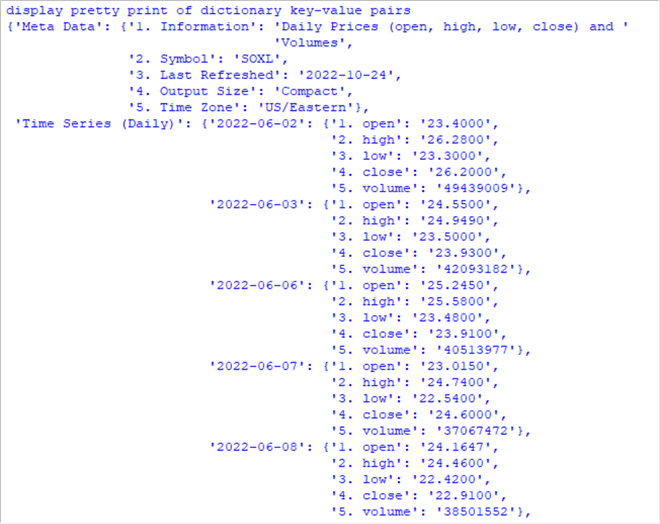 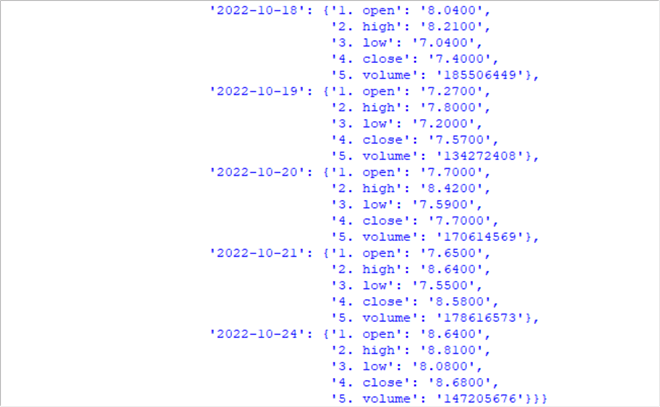 By default, this version of Python shows just the first and last five rows in a dataframe. After the last set of five rows, values in brackets denote the number of rows and data columns in the dataframe.

Downloading Intraday Prices and Volumes for a Variable Ticker Symbol

The script in this section introduces two new features for downloading Python stock prices and volumes from Alpha Vantage.

The script design below makes it particularly easy to change the value of the d_symbol object to GOOGL, MSFT, or SOXL. The version of the script below shows the assignment of the SOXL ticker symbol to the d_symbol string object.

There are two significant print statements in the script. 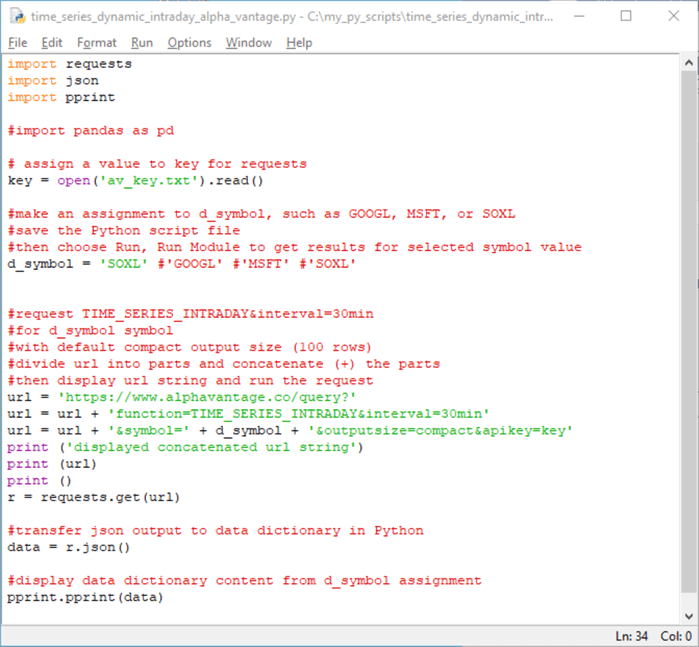 The following excerpt from the IDLE shell window is for running the script with an assignment of the GOOGL ticker symbol to the d_symbol object. The script was run on October 23, 2022. The output below shows the prices and volumes for the five least recent intervals in the results excerpt. 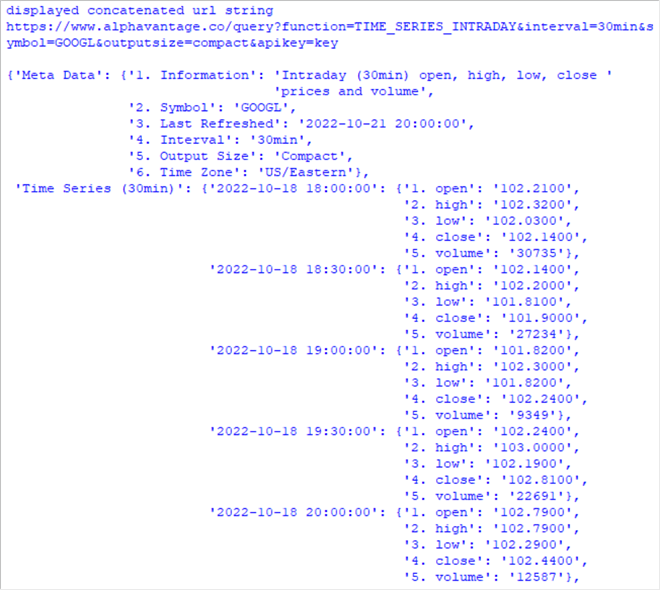 The next screenshot shows the five most recent intervals for the GOOGL ticker. The script was run on October 23, 2022. 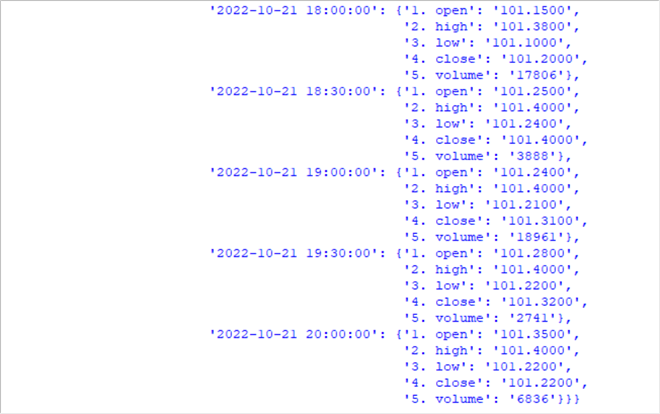 The next screenshot shows the five most recent intervals for the MSFT ticker. The script was also executed on October 23, 2022, a Sunday when the stock market is closed; therefore, the script returns values through the Friday before the weekend (2022-10-21). 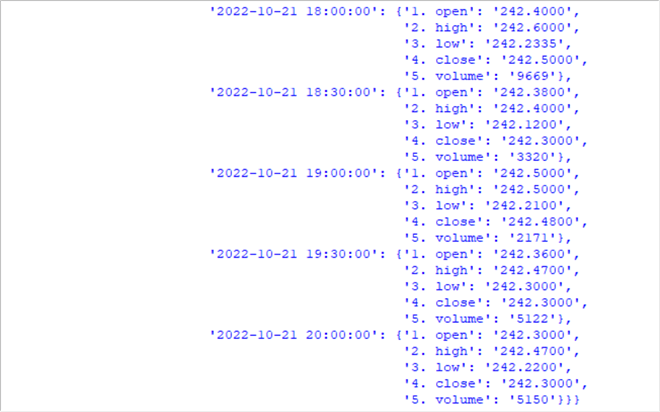 Sorting a Dataframe in Ascending and Descending Order by Index Values 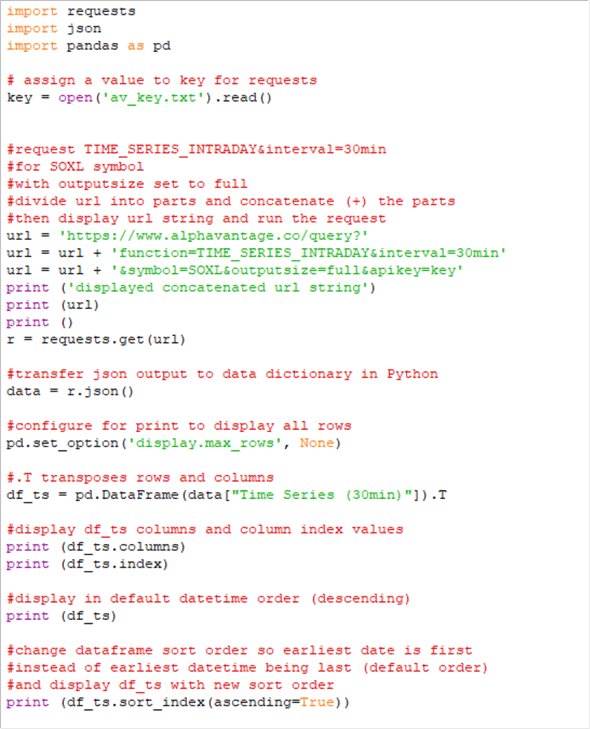 The following screenshot reveals the IDLE shell window populated by the preceding script. 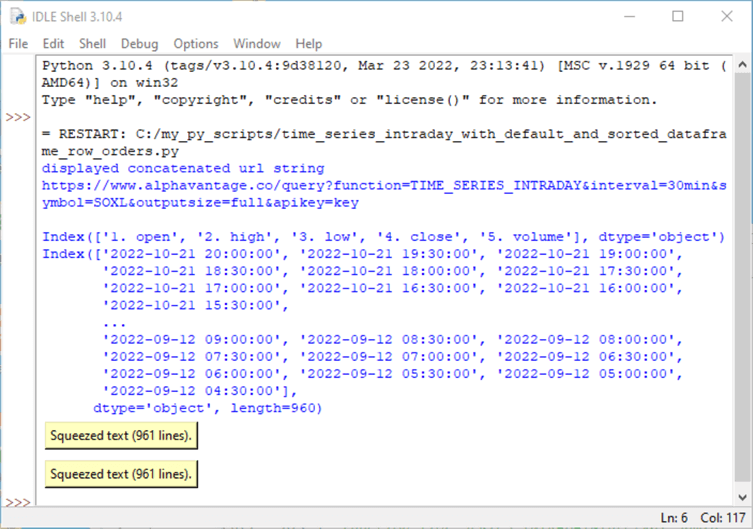 This tip's download has three resource files – one for each example of requesting and processing JSON data from the Alpha Vantage API with a Python script. A separate section in this script is devoted to each example.

Before running the scripts in the download, recall that you must obtain a free key from Alpha Vantage. You can store this key in a text file to which your script samples refer, or you can paste the text for your personal Alpha Vantage key directly into the script.

Beyond the Alpha Vantage API, this tip exposes you to extracting and processing data from other APIs. The Solution section of this tip includes four links to additional sets of APIs. You may find the content from one of the other referenced APIs to be a sufficient motivator to apply the lessons learned from this tip to another API besides Alpha Vantage.