Overview of How to Collect Securities Prices for SQL Server

Algorithmically based trading models for historical securities prices and volumes represent a practical testing ground for data science modeling and data mining techniques. When designing and assessing algorithms for profitable securities trading, it is efficient to have securities prices in a database. Please present an overview of the status of options for collecting securities prices for storage in a SQL Server instance.

The options for collecting securities prices are rapidly evolving so that they remain in a constant state of flux. Therefore, it is valuable to review the status of options on a regular basis.

This tip provides an overview of selected financial securities data vendors through code samples and screen shots illustrating user interfaces for web-based manual approaches. All approaches presented are verified to be operational as of the time this tip is initially prepared (early June 2022). As indicated above, it is not unusual for the availability status and the feature set of an approach to vary over time.

Python and the Pandas datareader

I authored numerous prior articles that cover how to transfer data from Yahoo Finance and Google via Python and the Pandas datareader (here, here, here, and here). The following script offers a refresher example on how to pull historical price and volume securities data via Python and the Pandas datareader from two different data sources (Yahoo Finance and Stooq).

If you are new to Python and the Pandas datareader, you may be wondering what a dataframe looks like when it is displayed. The following screen shot shows the output from the preceding Python script in an IDLE shell window.

This tip uses the 3.10 version of Python. When you install Python from Python.org, you automatically receive the IDLE module. IDLE is one of many modules that is suitable for creating, saving, modifying, and executing Python scripts, but it is the only Python integrated development environment that ships automatically from Python.org.

The top dataframe in the following screen shot is populated from the yahoo source, and the bottom dataframe uses stooq as its source. There are some similarities and differences between df_y and df_s although the datareader statement for generating both dataframes have the same symbol parameter as well as the same start object and end object values. 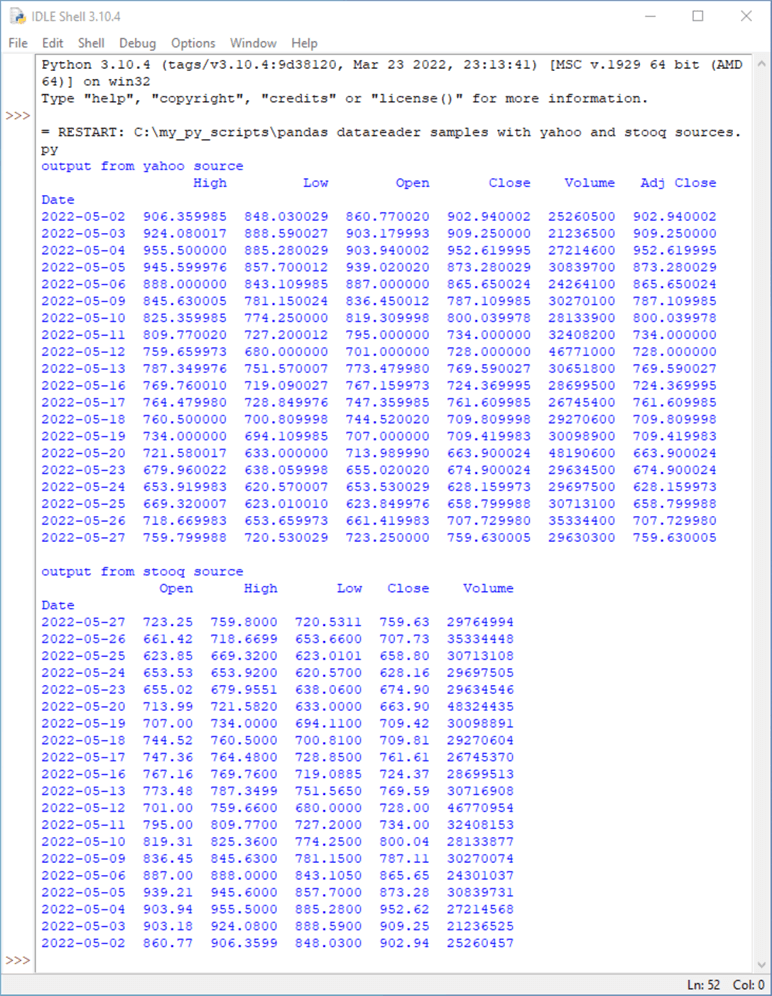 There are at least two sources (here and here) that provide coverage of a large selection of yfinance capabilities as well as numerous other sources that include interesting coding examples for yfinance (for example here, here, and here). This section presents some additional yfinance code samples for collecting historical financial securities data.

The three code samples for this section appear in the following script.

Here's a review of the output generated by the first two samples in the preceding script. 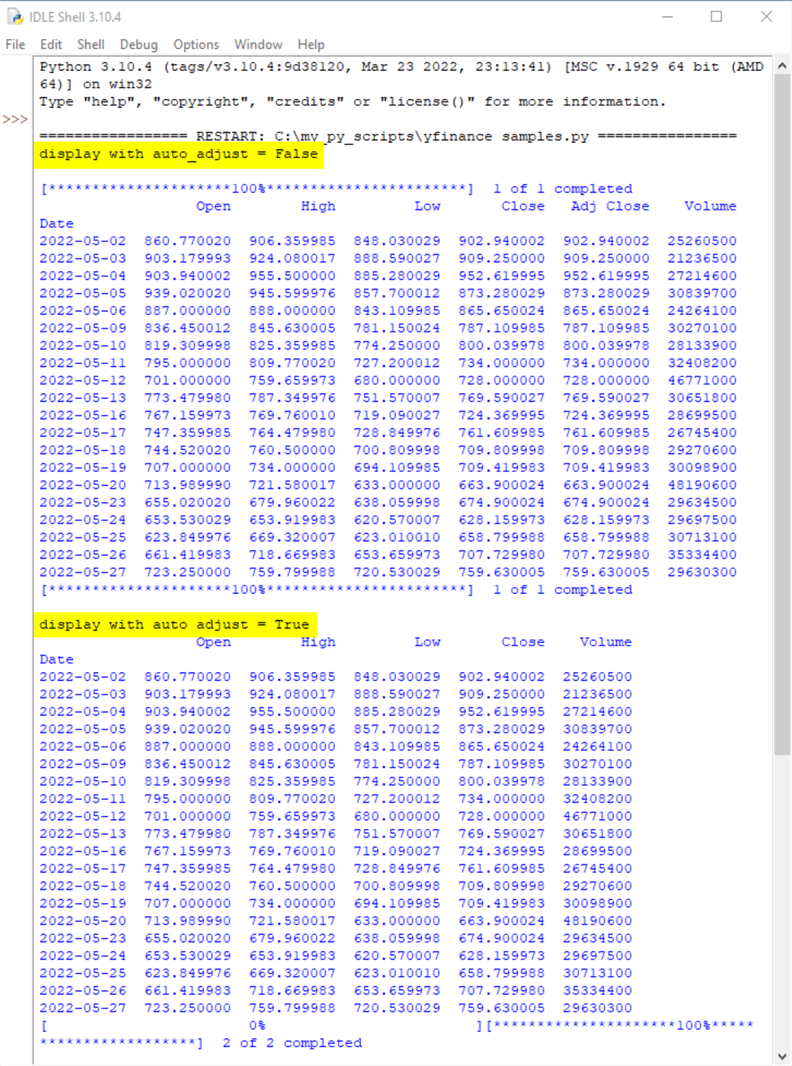 The next screen shot is from the third sample. Notice that the output from its print statement has just three columns. This is because the Open, High, Low, Volume, and Adj Close columns are explicitly dropped subsequent to invoking the download method and prior to invoking the print function for the df dataframe. 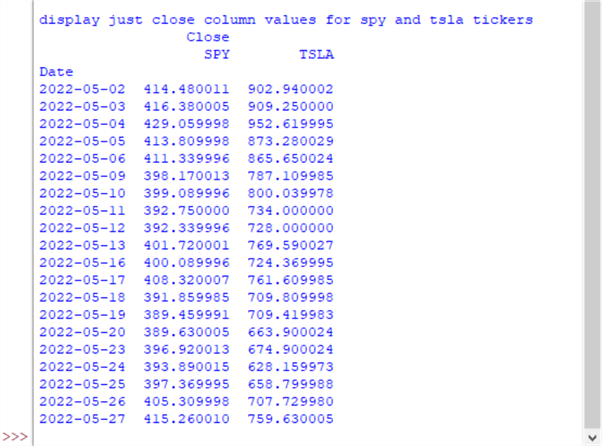 It is common for REST APIs for securities data to offer their services via a "freemium" model. This kind of model provides some data on a free basis. However, other data is reserved for any of several of different types of paid subscriptions. In addition to offering different domains of data to free versus premium users, vendors may offer more requests and faster servicing of requests per unit of time (minute or day) to premium users.

Alpha Vantage offers access to its REST API on a freemium basis. Happily, there is much useful content available from the free services; this tip highlights selected free Alpha Vantage services.

You must have an API key to access data from Alpha Vantage. You can claim an API key without charge from this link. After obtaining your API key, you should save it securely so that you can easily gain access to it, but others cannot. One reason for this is that the amount and frequency of data requests that you can make from an API key varies by the type of subscription associated with the API key. If multiple users are making data requests with the same API key, then requests limits are likely to be encountered more rapidly.

Because Alpha Vantage is fundamentally an internet-based service, it offers a url and query stings through which you can download historical stock market data. Here are five internet requests that you can submit through your browser after some minor editing.

The following screen shot shows a browser with its first tab open. The address line within the browser shows the syntax and parameter values for an Alpha Vantage query for the TIME_SERIES_INTRADAY function. The data output in response to the query is a file with a csv format. The interval setting for the query is 30 minutes. The apikey parameter value is obfuscated because it is my personal Alpha Vantage key, and it is in plain text. You can see a link to the output from the query at the bottom of the browser window. The output file goes by default to the downloads folder for the current Windows user. After it downloads, you can move it to any other location that you prefer, such as a project folder or a folder for time series data.

Here is a screen shot of the first 33 lines in the csv file output by the Alpha Vantage query appearing in the preceding screen shot. The file excerpt appears in a Notepad++ window; selected information is obscured for security reasons.

The first line contains the column headers for the csv file. The next 32 lines are for successive time slices for the most recent date available at the time the query was run. The query was run on June 2, 2022, and the data are for the following trading date, June 1, 2022. The data for the first 30-minute time slice in the day appears in line 33; this interval is from 4:00 a.m. through 4:30 a.m. The data for the last 30-minute time slice in the day appears in line 2; the interval for this slice is from 7:30 p.m. through 8:00 p.m. Each line of the file terminates with a carriage return followed by a linefeed. All fields within a line are separated by a comma. 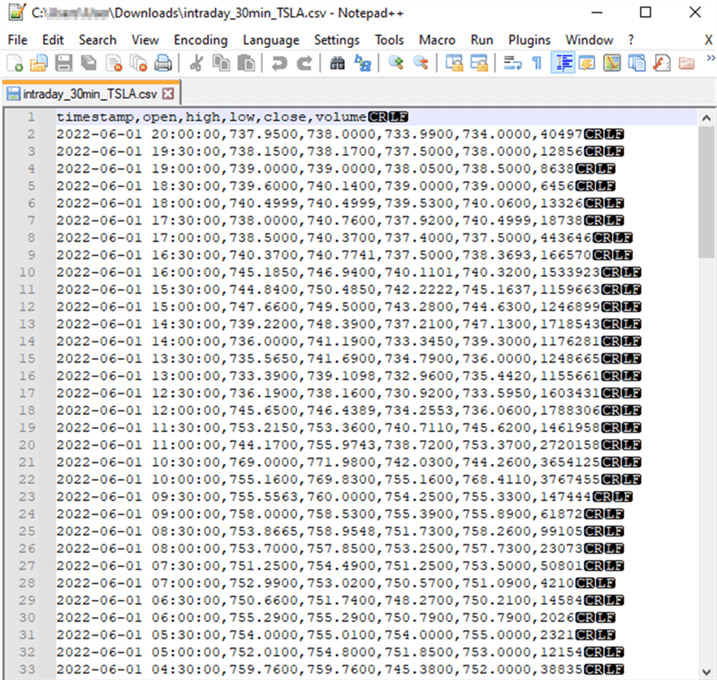 Here is another screen image of a browser window for collecting daily price and volume data for the TSLA ticker symbol with Alpha Vantage. The outputsize parameter is included in this query; its value is set to full so that all available rows appear in the csv file with the query results. The apikey parameter value is again obfuscated to maintain the confidentiality of my personal API key. When you run this query or one of the other queries listed throughout this section just replace the obfuscated parameter value with your own personal key.

The preceding query retrieves 3003 data rows for the TSLA ticker symbol. The following pair of screen shots displays the first and the last set of ten data rows in the csv file. The most recent data row from the first screen shot is for 6/1/2022, the day after the data query was run on 6/2/2022. Because the daily query returns historical data, the most recent date is always yesterday. The last set of ten rows shows the initial historical date as of 6/29/2010; this is the initial date for which the TSLA ticker symbol was listed as available for trading. Recall that historical data can go back 20+ years if the ticker symbol is available for that duration. 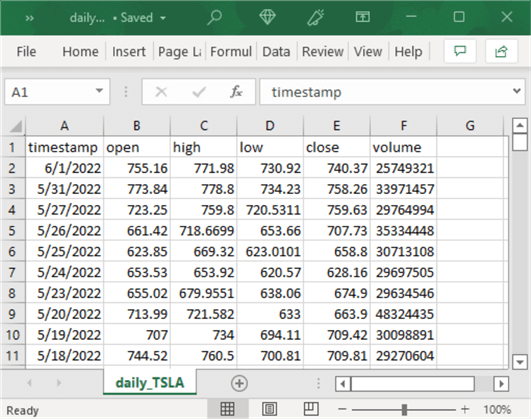 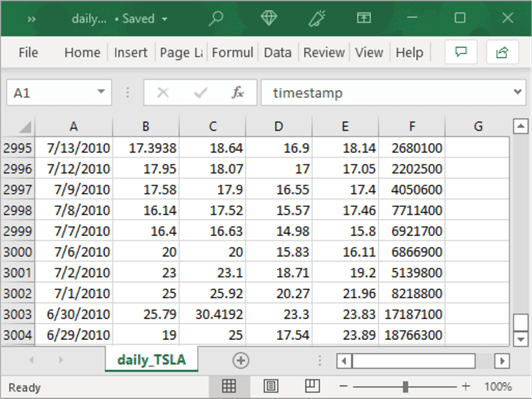 The preceding two examples show how to transfer the results from an Alpha Vantage query to a csv file. However, what if you want to inspect the query results and possibly share the query results with other internet applications – not just as an external csv file. The Alpha Vantage documentation includes a Python code sample for displaying data from an Earnings calendar query in a csv format. The code is adapted below for daily historical time series data. The output from this code is demonstrably easier to inspect than the standard json provided by the Python sample list the TIME_SERIES_DAILY section of the Alpha Vantage documentation.

In addition, new lines are added to help explain the role of each line of code. The steps in the code are as follow

For this example, the code was run on June 3, 2022. Therefore, historical data are available starting from June 2, 2022. In addition, the Alpha Vantage queries return results in two parts. The first part is for meta data in response to the get request based on the HTTP query in the CSV_URL string object. The second part is for the time series data values. You can return these two separately or together. The script above returns the two parts together – one after the other. 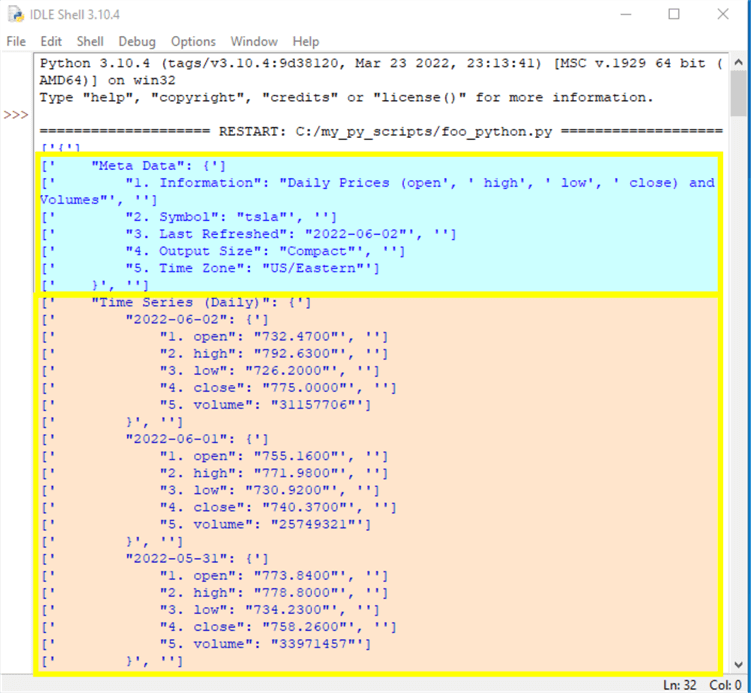 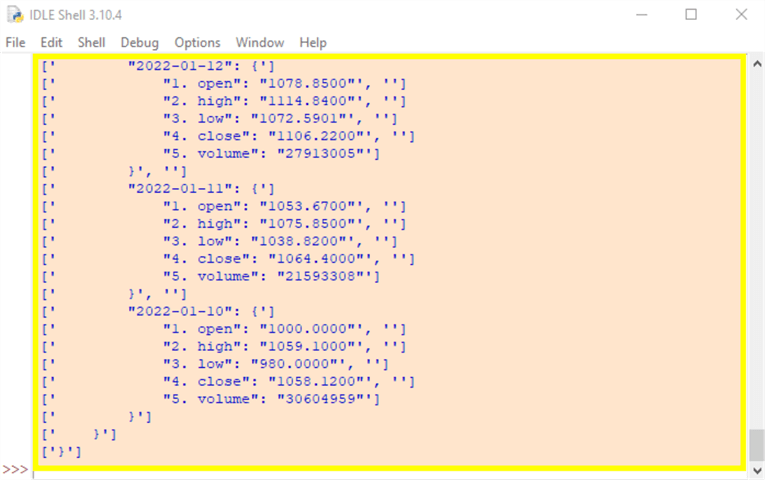 This tip briefly describes and demonstrates three approaches to collecting securities time series data for daily open, high, low, close, and volume. Two of the approaches rely on Python scripts in combination with proprietary packages. A third approach depends on a url and a query string. Additionally, a prior tip covers a fourth approach that configures and populates csv files with securities time series data directly from the graphical user interfaces at Yahoo Finance and Stooq.com. The code for the two approaches that depend on Python and a proprietary package as well as a third web-based package, and the fourth approach based on built-in graphical user interfaces within Yahoo Finance and Stooq.com all work as of the time this tip is prepared (early June in 2022).

No attempt is made to declare a best approach across the four approaches. Some developers may prefer the graphical user interface approaches that are briefly alluded to in this tip and described in a prior tip. Others who are already proficient or who seek to enhance their proficiency in Python may prefer either the Pandas datareader or yfinance approaches. Finally, those who like web-based approaches may prefer the Alpha Vantage REST APIs. No matter which approach you prefer most, it is good to become familiar with more than one approach. This is because some approaches have been known to be temporarily out of service, and at least one data vendor (Google) has exited the securities time series data vendor industry altogether.

Therefore, the recommended next step is to use this tip to become familiar with at least two approaches to collecting securities time series data.