The GOOGLEFINANCE function inside of Google Sheets downloads historical and current data on stocks and other securities from the Google Finance site. However, the downloaded data end up in a web-based spreadsheet tool instead of residing within a database like SQL Server. This tip demonstrates a simple solution for using the GOOGLEFINANCE function in combination with T-SQL code for transferring historical data from Google Finance to a SQL Server database for data mining of stock prices and stock trading rules.

The GOOGLEFINANCE function inside of Google Sheets is attractive because it can download historical data for multiple stock tickers within a single spreadsheet. Get an introduction to this function here. After specifying a Google Sheet for a bunch of stock symbols, you can share that sheet with others. In contrast, both Google Finance and Yahoo Finance sites offer an URL with query string parameters API for specifying what stocks and time period to download data. However, the URL with query string parameters approach allows the downloading of data for just one ticker symbol at a time. Additionally, the downloaded data with the URL with query strings parameters approach does not facilitate data sharing with the same ease as Google Sheets.

This tip presents a solution for downloading historical data for 60 ticker symbols for data going back as far as January 2006 and then imports the data to SQL Server. It is very straightforward to change the ticker symbols as well as the date range for which data is downloaded. The presentation starts with an overview of the solution strategy. Later, selected features of the solution are examined to empower you to expand and modify the solution as your needs dictate. The presentation of the solution's technology also includes an examination of selected data quality issues for historical stock prices from the Google Finance site.

An overview of the solution strategy

Ignoring installation and setup issues for Google software, there are two main parts of the solution.

Since the problem addressed by this tip is to download data from the Google Finance site with the GOOGLEFINANCE function within Google Sheets, you need access to Google Sheets. Furthermore, Google Drive is currently the only means of managing sheets created with Google Sheets and files derived from those sheets. The functionality provided by Google Sheets and Google Drive also requires the Google Chrome browser and a Google account to the overall Google site. Access to all of this software is available free from Google, and you can install Google Chrome as a non-default browser so that you can continue to use Internet Explorer as your default browser (if that is what you prefer).

A demonstration on downloading the data from Google Chrome

Each sheet has two tabs with control information about the range of ticker symbols and dates for which to download data. The remaining tabs within each sheet contain the historical stock price data. The stocks_for_mining_A2_A25 sheet has data for ticker symbols in cells A2 through A25 within its ticker_list tab. The following screen shot shows the sheet with the ticker_list tab selected and the cells A2 through A25 highlighted.

The tab named start_and_end_dates has values of 1/1/2006 for a start date and 9/24/2006 for an end date. Historical stock price data are end-of-day data. You should add one day to the last day through which you seek to download data. Therefore, if you want end-of-day data through September 23, 2016, you should specify September 24, 2016 as your end date. 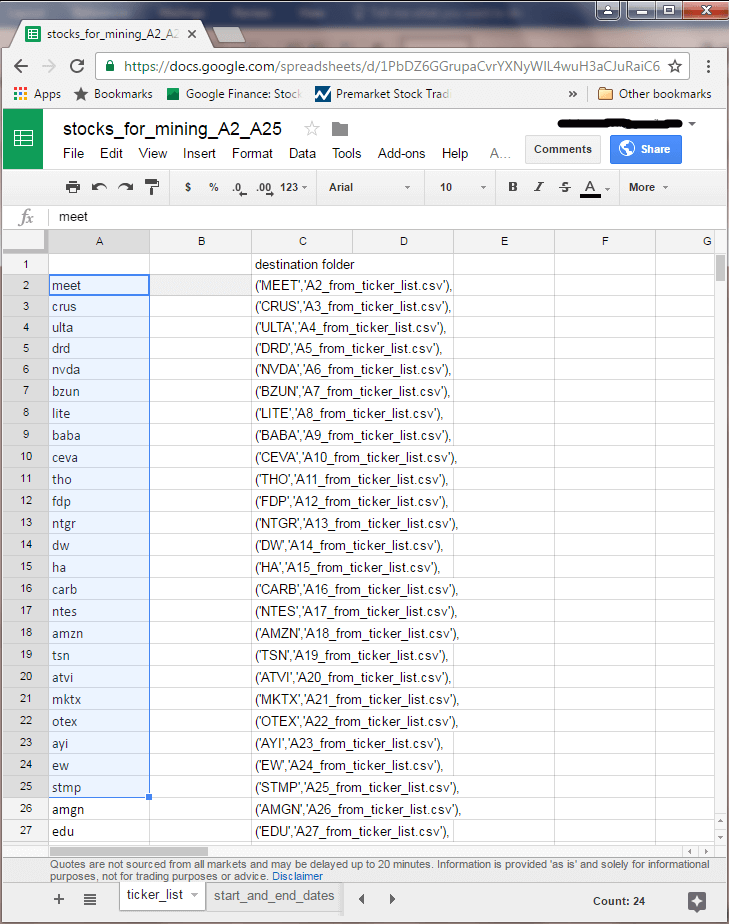 The meet symbol is for a company named MeetMe.com, which had its initial trading date on January 21, 2011. This is also the first date in Column A. The last date in column A is one day before the end date value (September 24, 2016) in cell B3 within the start_and_end_dates tab.

After the GOOGLEFINANCE function populates rows in a tab, select column A within the tab. Then, choose the Format, Number, Date menu item. This represents the values within column A in mm/dd/yyyy format. When the data are imported within SQL Server, this format selection from within Google Sheets simplifies the processing of the downloaded data. 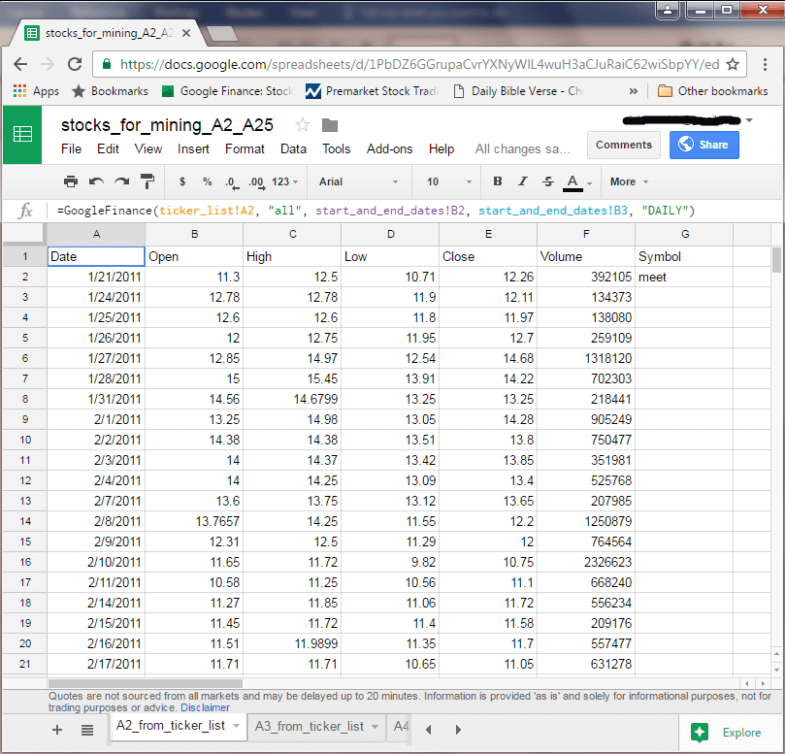 You can export the data from any tab within the stocks_for_mining_A2_A25 sheet as a csv file with the File, Publish to the web menu item. This menu selection publishes the content of a designated tab in a sheet to Google Drive. From Google Drive, you can share the published file and/or download it to your computer. The solution described by this tip uses the latter option so that the data can ultimately be imported into SQL Server.

The following screen shot shows the dialog settings for publishing to Google Drive the contents of the A2_from_ticker_list tab as a csv file. Notice that you can use selection boxes for designating both the tab name and format of the published file. Clicking the Publish button launches the process. You can use the File, Publish to the web menu command to publish successively the contents of each of the tabs in a sheet.

Because of the structure of the sheets in this tip, the csv files are not exactly like many csv files. In particular, there is a jagged right edge to the file because the ticker symbol value appears only on the initial row. Custom T-SQL code for importing the csv files downloaded from Google Drive into SQL Server can assign a ticker symbol value for each row in a ticker's data set so that the right edge is no longer jagged within a SQL Server table. 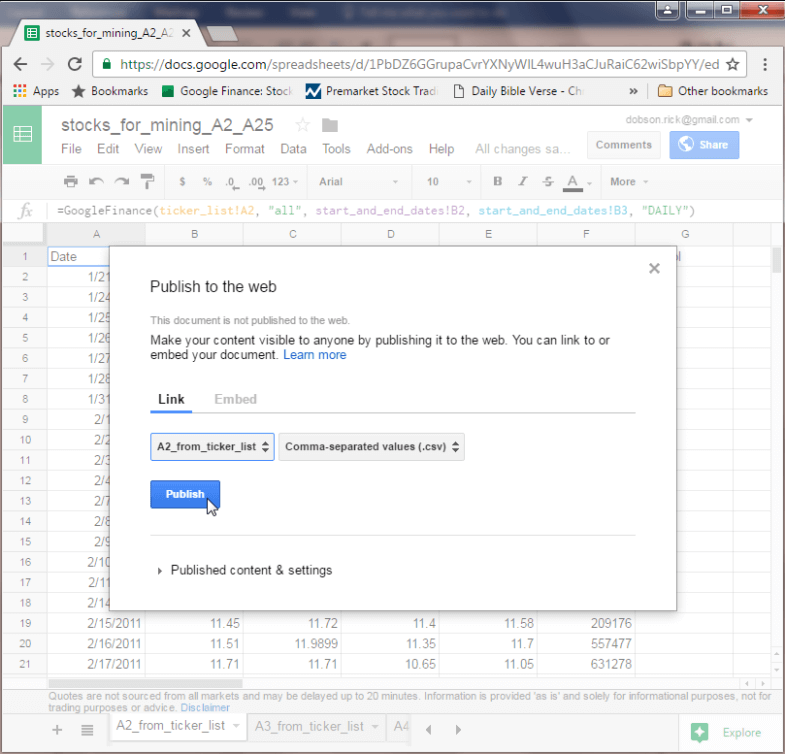 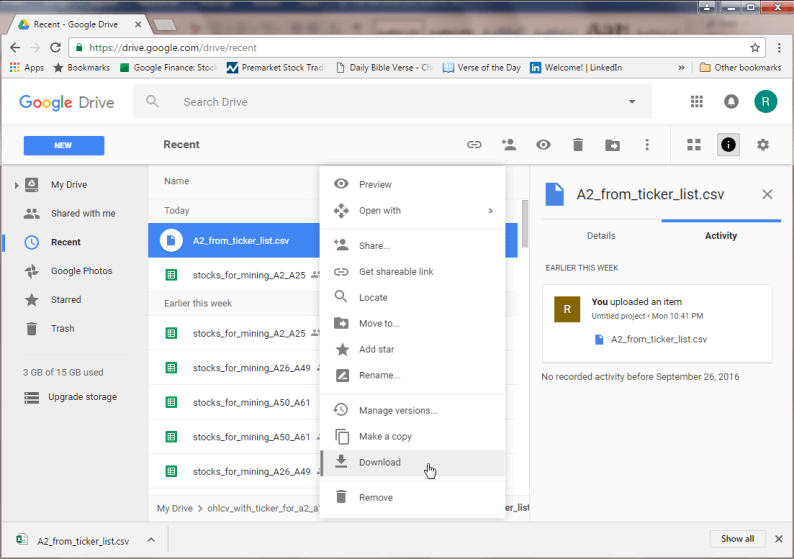 A T-SQL script file (import_downloaded_data_into_SQL_Server.sql) uses 4 main tables and a WHILE loop to convert the downloaded csv files for each stock ticker symbol for insertion into a single table in a SQL Server database.

The WHILE loop sequentially passes through the rows of the WHILE_LOOP_FIELDS table and successively populates the imported_stock_prices_lines and imported_stock_prices tables. After the data are processed and ready for data typing, they are inserted into the stocks_symbol_ohlcv table. After passing through all the rows in the WHILE_LOOP_FIELDS table, the stocks_symbol_ohlcv table has data rows for all ticker symbols downloaded by Google Drive.

Walk through code for importing csv files into SQL Server

The code within import_downloaded_data_into_SQL_Server.sql script file has two main segments.

The beginning of the first segment creates the imported_stock_prices_lines, imported_stock_prices and stocks_symbol_ohlcv tables. The code for creating these tables appear below. Before invoking the code to create the tables, there is a USE statement for the stocks_for_mining database. You need a database to hold the solution's tables; this presentation uses the stocks_for_mining database to fulfill that role. After populating the stocks_symbol_ohlcv table for all ticker symbols of interest, you can start data mining stock prices and/or stock trading strategies.

The next block of code within the first segment creates and populates the WHILE_LOOP_FIELDS table. There are three parts to this code block.

The last code block before the WHILE loop performs two functions.

The first code block within the WHILE loop assigns the SYMBOL and path_file_name column values from the WHILE_LOOP_FIELDS table for the row being processed to the @SYMBOL and @path_file_name variables.

Then, some dynamic SQL performs a BULK INSERT statement to populate the imported_stock_prices_lines table based on the file pointed at by the @path_file_name variable.

After the imported_stock_prices table is initially populated based on the csv file for a source tab inside a Google sheet, the processing moves on to populating the SYMBOL column for all rows in the table (up to this point, there is only a SYMBOL column value for the first row).

Processing for a row in the WHILE_LOOP_FIELDS table completes when the character values in columns of the imported_stock_prices table are inserted into the stocks_symbol_ohlcv table. This final processing step:

Reviewing a couple of data issues can give you a feel for the quality of historical data that you get from Google Finance as well as how validly this tip maps source data from Google sheets to a SQL Server table.

The following screen shot shows the top 3 and bottom 3 rows for the drd symbol from the stocks_symbol_ohlcv table along with the path_file_name column to identify its source tab in an underlying Google sheet. The next pair of screen shots shows the corresponding rows from the A5_from_ticker_list tab in the stocks_for_mining_A2_A25 Google sheet. Here are some data quality issues that merit your attention. 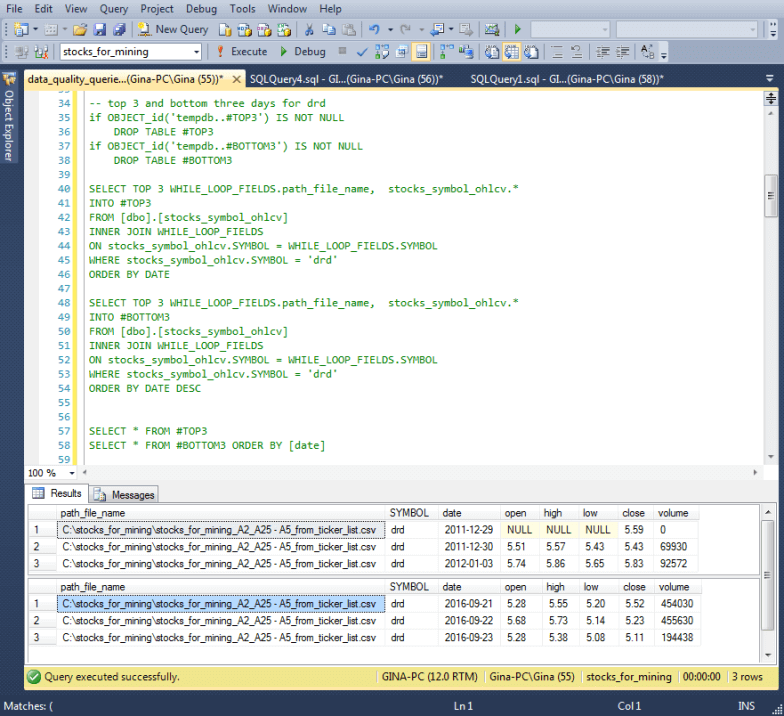 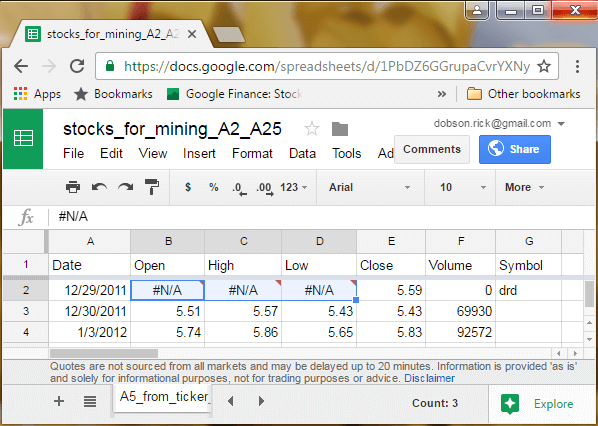 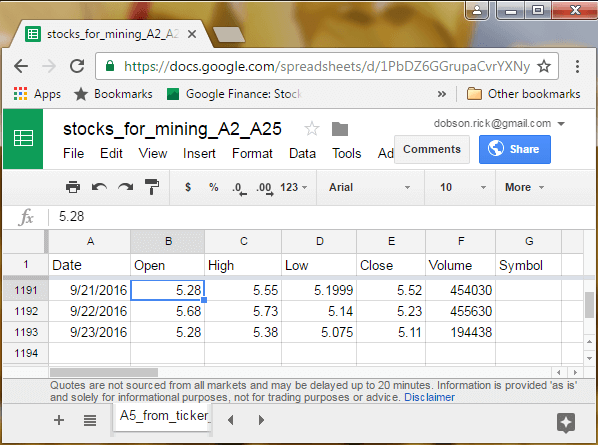 Here's a query for count of rows loaded by ticker symbol with the first 18 rows of the result set showing in the screen shot. 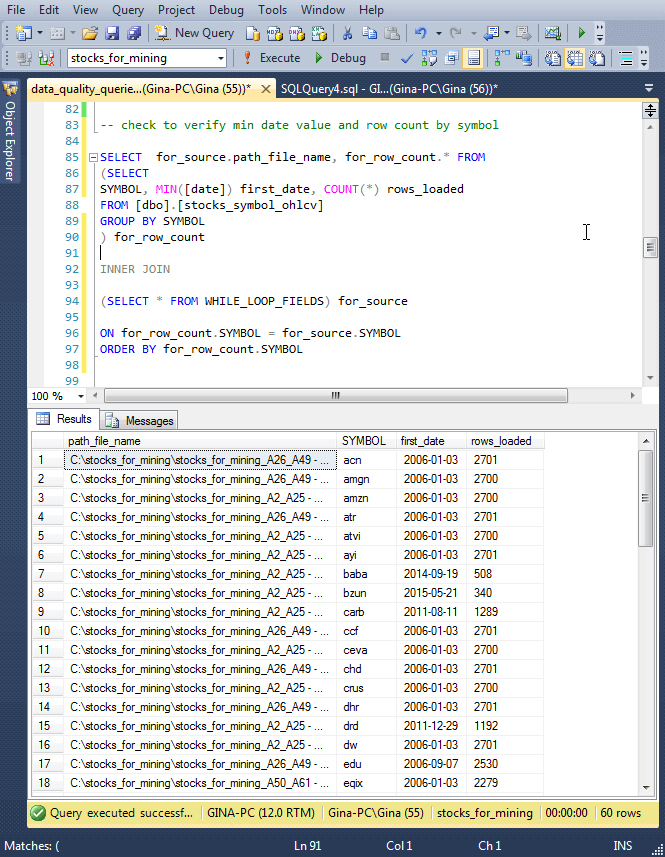 Some top line conclusions from reviewing data quality issues are the following.

This tip demonstrates how to download data for a set of 60 stock ticker symbols with the help of the GOOGLEFINANCE function in Google Sheets. The tip also covers how to copy the downloaded stock history data from Google Sheets to Google Drive and ultimately to SQL Server.

Here are some suggested next steps depending on your needs and interests.

Finally, I close by indicating that this tip is not recommending any particular stocks, including the 60 stocks used in this demonstration. Actually, the Google Sheets for this tip, which you can find by following links presented towards the top of this tip, include more than 60 stock symbols. You may find the additional stock symbols useful for augmenting the base set that you can download from the sheets as they are. At the time that I submitted this tip to MSSQLTips.com, I or other immediate family members, held positions in a handful of stocks among those in the sheets.

Using T-SQL to Detect Stock Price Reversals with the RSI

Using T-SQL to Refine an Analytical Model for Picking Stocks